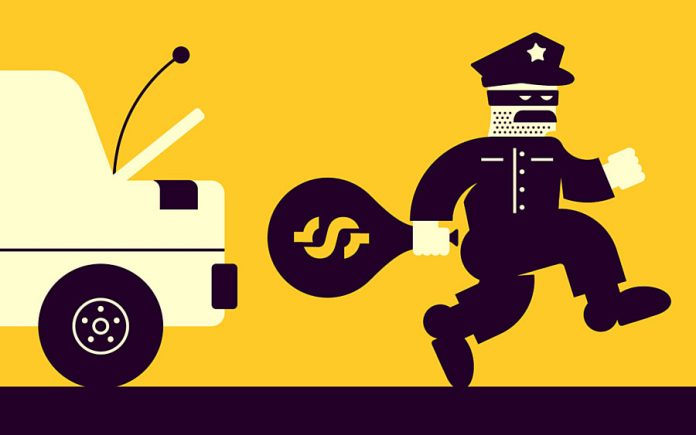 Armed government workers in New Hampshire – the supposed “free” state – pulled over Edward Phipps for a minor traffic violation in October of 2016. Apparently, he was driving slightly faster than the posted speed limit and may have been tailgating.

Phipps made the mistake of carrying an “excessive” amount of cash – a mistake he didn’t know not to make since there’s no law against carrying any amount of cash, in New Hampshire or anywhere else.

There is, however, a war on some drugs. 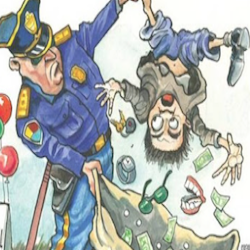 Which has become a kind of Gesetz zur Behebung der Not von Volk und Reich for the United States – with the main difference being that the targeted class isn’t Jews but rather everyone.

Or at least, their money.

Under the auspices of this war on some drugs – the term being a rhetorical device with no real standing in law, since no formal declaration of war on any drugs has been passed by Congress – such things as having to charge a person with a crime and then convict him of having committed it (the person having had the opportunity to defend himself in court against the charge prior to conviction) before relieving him of property or liberty are no longer legally required before armed government workers may simply steal what they deem to be “excessive” amounts of cash, contrary to the fact that is not illegal to carry any amount of cash, anywhere in the United States.

And so, they did.

They do it all the time. They did it to Rustem Kazazi earlier this year. The 64-year-old was relieved of almost $60,000 – his life savings – by armed government workers at the Ohio airport where he was trying to catch a plane to his native Albania, where he had planned to use the money to buy a retirement home.

As in the movie Deliverance, if they want your money, they’ll take your money. Only it’s not savage hillbillies doing the taking.

It is a savage government. 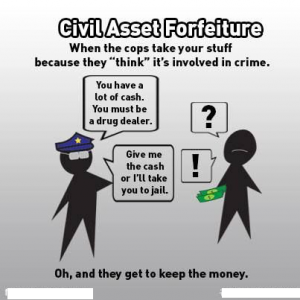 Phipps attempted to recover his money, pointing out that he hadn’t been charged with any crime, much less convicted. Also that possession of $46,000 in cash is as legal as possession of a trunkful of Diet Coke.

Odd, perhaps – but not illegal.

Which raises the question of . . . legality.

Armed government workers style themselves law enforcement, which presumes they enforce laws – and ought to know the law and abide it. This includes the laws regarding the sanctity of property (and person) unless the property in question has been determined, via due process, to not be the lawful property of the person who is found in possession of it.

An armed government worker can’t just take (and keep) your car be claiming it is “excessive” or that you look “suspicious.”

After all, why not?

Consider: What law was violated in the case of Phipps and the thousands of others who have had their lawful property stolen by law enforcers? Is it not the presumptive obligation of law enforcement to establish that a law has been broken prior to administering punishment? And more relevant – to protect people’s lawful property rather than steal it?

All of the above was dismissed by the federal armed government worker to whom Phipps naively appealed for succor – or at least, enforcement of the actual laws. Such as the laws prohibiting theft – which is what was perpetrated upon Phipps, no matter how many badges the thieves had pinned to their chests. And there is also the law requiring “just compensation” when armed government workers relieve people of their rightful property. And – most fundamentally – the lawfully required presumption of innocence until guilt has been established. Rather than the other way around. 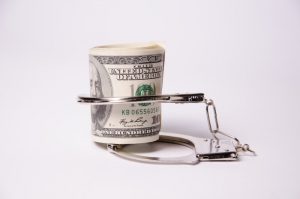 It did not matter.

What did matter was the assertion of “suspicion” by the armed government workers that the $46,000 found in Phipps’ car was “connected” to illegal activity. This is of the same species as needing to pass Obamacare so you can find out what’s in the bill  . . . after it’s been passed.

Only worse because at least Obamacare was actually passed. Our “representatives” – a majority of them – did vote for it.

When did it become a presumptive criminal act to carry cash? When was the vote held? What is the number of the bill?

When was a law passed stating that carrying a certain amount of cash is “excessive” – in order that honest, law-abiding people know not to carry that amount – so as not to be relieved of it by badge-wearing thieves? 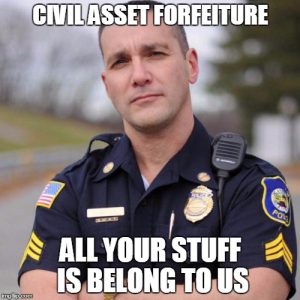 Is $7,500 “excessive”? It certainly could be – in the eyes of an armed government worker interested in pocketing it. I mention this sum because it’s the amount of cash I carried with me a few years back to purchase my current pick-up truck. My reasoning – not that it matters, or ought not to matter given that carrying cash is legal – was that (a) sellers are motivated by cash and (b) sellers generally will not let you drive away in a vehicle unless you paid for it in cash; checks often bouncing.

I wanted to buy the truck – load my bike in the bed – and drive home. Which I did. People often do exactly what I did – foolishly thinking they are safe, having committed no crime.

Luckily, I was not stopped and searched by armed government workers, who might have found the cash “suspicious” and “excessive” and relieved me of it, as they relieved Phipps and Kaazi of theirs. But it could have happened to me.

The bottom line is this: Armed government workers can relieve anyone of any amount of cash at any time  – by uttering the magic words: “Suspicious” and “excessive.”

Eventually, after two years almost of wrangling, Phipps got back a fraction of his cash. About $6,000. The thieves of New Hampshire kept $39,000 of the total. From a man never even charged with a crime.

Heads ought to roll but won’t. And because they won’t, this will continue and get worse. Be ready for it. And whatever you do, don’t carry cash on your person – unless you don’t mind “contributing” to law enforcement.