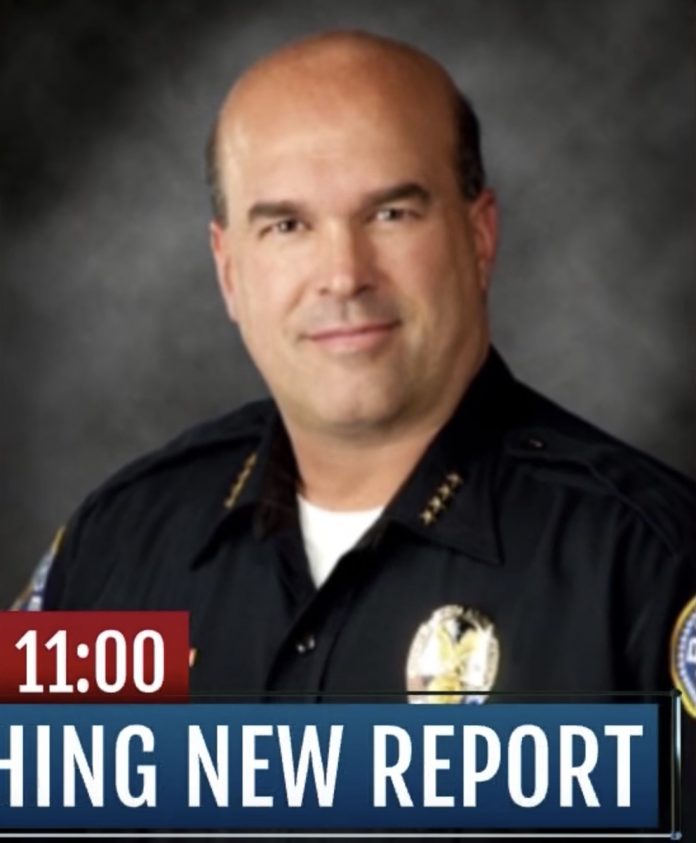 Here’s news coverage from a local Vegas, NV ABC affiliate about the former Obergruppenfuhrer (note his four stars and “campaign” ribbons) and his stellvertreter (deputy) who were both fired after an internal investigation regarding sexual harassment, including ass grabbing.
Leaving aside the ass-grabbing, it’s both hilarious – and depressing – to see these geeks wearing military rank insignia.

We hear of “stolen valor” all the time – but what about these cases?

The pictured Obergruppenfuhrer is not a commissioned officer. He is not even a gefreiter.  He is certainly not a four-star general. Yet he is wearing costume jewelry so indicating. The badges of rank on my old Boy Scout uniform are more legitimate. I am, after all, actually an Eagle Scout. But I don’t expect anyone to salute me.

Why isn’t he – and other exemplars of stolen valor – confronted for impersonating an officer? 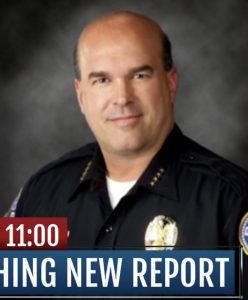 Allowing these geeks to get away with wearing military rank insignia is dangerous because it inflates their already pathological sense of self-importance. Officers (real ones) are entitled to deference (in the military, by those of lesser rank) and expect their orders to be followed without question.

But these are civilians – yes, exactly like the rest of us.

That geek with the four stars in his lapel is no more a four star general than I am a Napoleonic Marshall of France. The difference being I don’t expect people to obey my orders – and I don’t have a state-issued weapon and legal power to force others to “respect my rank.”

It is as dangerous outrage to let civilian police appoint themselves military ranks as it is to provide them with military kit – Battle Dress Uniforms, high-powered weaponry – and then train them as if they were in the military. It induces a psychosis in them. They begin to think they are in the military – and to act like it. They come to regard themselves as a “warrior caste” – notwithstanding that most of them couldn’t pass basic PT if their very lives depended on it – nor that the “enemy” is a largely defenseless civilian population that poses much less of a “threat” to their “safety” than they pose to it.

About 1,000 Americans are killed by police in this country each year. Some are criminals, certainly. But other countries have them, too – and even the Chinese don’t shoot as many of them dead in the streets as American police do.

A traffic stop is incredibly dangerous . . . for the person stopped. He is probably not armed. He isn’t given the benefit of the doubt. He is presumed to be a “threat.” If the scharfuhrer or untersturmfuhrer shoots him dead for inadvertently “reaching” for his driver’s license, it is probable the murder will be written off as “justified.”

Thirty years ago, SWAT teams were a big city thing – in a handful of big cities. No every small town has its own MRAP – sometimes two – and staff of geared-up bulletheads to man the things. Incidents like these will be happenning in the future, too, but not here.

Whole towns are “locked down” – terminology once reserved for prisons. 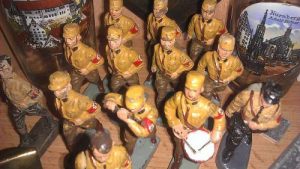 It is not a coincidence that there is so much Hut! Hut! Hutting! going on. The line between civilian police and an occupying army is millimeter thin.

Most Americans, being cognitively dissonant and historically oblivious as well as trained in dog-like devotion to anything wearing a uniform – do not grok this, in part because they do not remember what happened in other countries where wanna-be soldiers began appointing themselves ranks and strutting down the street, expecting and then demanding deference to their Authority, treating “civilians” with derision, contempt and – inevitably – murderous cruelty.