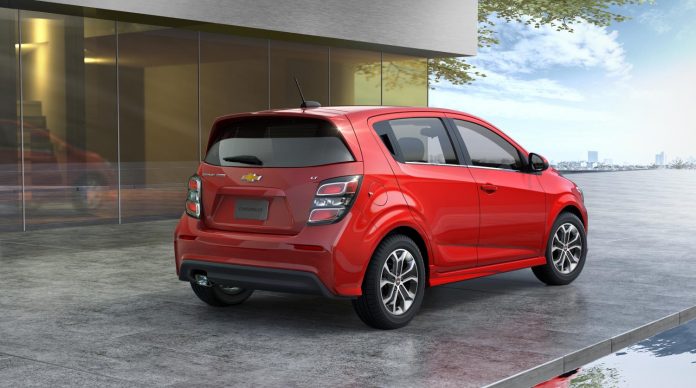 Chevy’s second smallest car is also, as it turns out, one of its roomiest.

It’s also less than half the price of Chevy’s smallest car – the Bolt electric car – and it goes twice as far, without having to wait nearly as long.

This explains why GM (via the government) needs to pay people to buy the Bolt.

The Sonic relies on no such inducements. 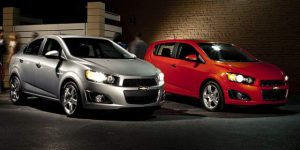 It’s slightly larger than the electric Bolt – which is Chevy’s smallest car and (like several other non-electric rivals, including the Hyundai Accent) sold in sedan form only.

The Sonic is also much more affordable than the Bolt – which  stickers for $37,495 to start – or about what you’d spend to buy a loaded Camaro SS, which isn’t electric but offers much better performance and goes a lot farther on a tankful than the Bolt can travel on a charge.

Prices for the Sonic start at $16,295 for the base trim sedan with manual transmission and top out at $21,520 for a five-door hatchback Premier trim with the automatic transmission.

The hatchback version has nearly three times the cargo room of the sedan (47.7 cubic feet vs. 14.9 cubic feet) as well as easier access to that space because of the liftgate vs. trunk and because the cargo area is an integral part of the passenger compartment. 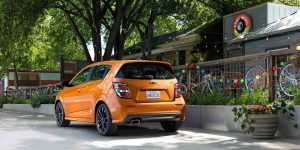 This transmission has two overdrive gears – fifth and sixth – which (along with the more efficient 1.4 liter engine) accounts for a roughly 5 MPG uptick overall vs. last year’s Sonic with the previously standard 1.8 liter engine and five-speed transmission.

Standard turbocharged engine is peppier than rivals’ non-turbo’d engines – and just as easy on gas. 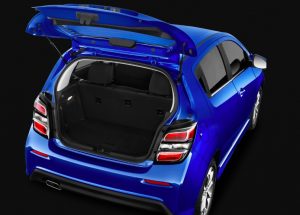 No more option to go with the mechanically simpler (as well as less expensive) 1.8 liter no-turbo engine.

Rivals like the Hyundai Accent sedan cost less to start (base price $14,995) and deliver about the same MPGs. Honda Fit costs about the same ($16,190 to start) and offers even more room in a package about the same size. 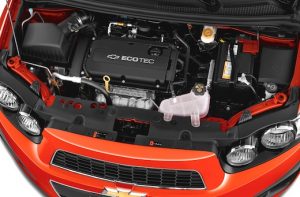 The previously optional 1.4 liter turbocharged engine is now the Sonic’s standard – and only available – engine for 2019. 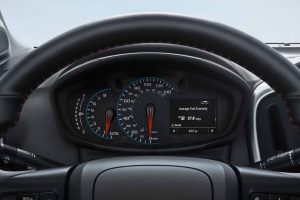 The ’19 Sonic’s upticked mileage also matches the MPGs of less powerful (and peppy) rivals like the Hyundai Accent sedan (28 city, 37 highway) while the more powerful engine makes it much quicker than the Honda Fit, which takes ten seconds to get to 60.

On the downside, the $1,000 price uptick vs. last year rubs out the mileage gains – at least, until you’ve driven a lot of miles. Chevy – and the rest of the car industry – is bear-hugging smaller and smaller engines goosed by turbos to improve the MPGs – no matter how much it costs us. 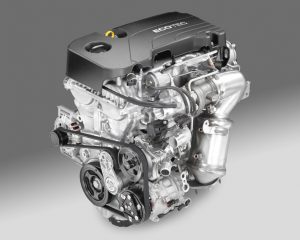 But the car is at least quicker.

The other downside is that the 1.4 liter engine is pressurized. That’s what a turbo does – and it means the engine has to work harder to make power – and harder-working engines generally don’t last as long as those that don’t have to work as hard.

This is a general potential problem with all turbocharged cars – but turbocharged economy cars have an additional potential problem. It’s one thing to spend say $1,500 to replace a cooked turbo in a ten-year-old car that’s still worth $10k. But a car like the Sonic hasn’t got as much depreciation cushion. Pick one up today for $15k (after haggling) and ten years from now, it might be worth $5k – at which point it is hard to justify putting $1,500 in it for a new turbo. 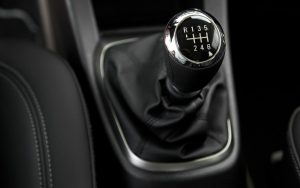 But, you will enjoy that extra speed for as long as the turbo lasts.

Which – fingers crossed – might be as long as the car does.

And while you had to pay an extra grand this year, you still paid about fifteen grand less than you’d spend to get into the Bolt electric car. Which is only slightly speedier (0-60 in about 7 seconds) and (best case) only goes 238 miles before it exhausts its battery power and then has to be plugged in for at least 30-45 minutes to recover a partial charge.

Thus, the Bolt’s touted 238 mile range is really more like 190 miles – or about half as far as the Sonic can go on a full tank.

And the Sonic – unlike the Bolt – can be refueled to full in just a couple of minutes. 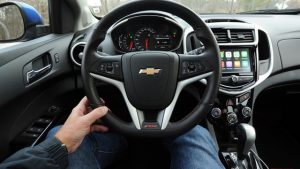 Cars in this class are designed chiefly to be inexpensive and fuel-efficient, but the Sonic adds some driving fun to the mix.

Turbocharging used to be a power-adder for already peppy cars to make them even more so – with a mileage loss accepted for the sake of improved acceleration. The Sonic gives you the extra pep without the penalty at the pump.

The turbo also really helps the automatic-equipped Sonic get going – once again, because of the torque. A small engine without a turbo that doesn’t make a lot of torque in the low and mid-range can at least be revved to the sweet spot of its powerband, the clutch slipped and off you go  . . .

If you have a manual transmission.

With an automatic, acceleration is often tepid without the torque-assist of the turbo. It’s the price you pay for the convenience of not having to shift in traffic. But you don’t pay that price here. There is enough torque on tap to spin the tires, even – and that’s fun, too.

Also, it’s agile – because it’s got such a small footprint.

The short wheelbase (99.4 inches) and overall length (173.9 inches) not only makes it easy to slot into tight spots, it gives it a tight (34.5 inch) turning radius. Which makes it an ideal city/commuter car that’s not out of its depth on the highway. 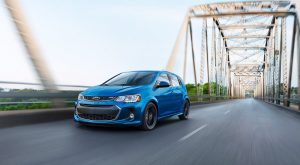 The Sonic’s chief negative is the obnoxious auto-stop/start system (ASS – though that’s not the acronym anyone uses although they should) which constantly cycles the engine off and on and off an on . . . at every red light or halt of traffic.

ASS is standard and while it can be turned off, you have to turn it off  every time you go for a drive or it will turn the engine off at the first red light.

Almost no one wants ASS (this kind of ASS) but ASS is becoming de facto standard equipment in new cars because the government wants it. ASS slightly improves gas mileage – maybe by 1 MPG overall.

No matter how much it costs us. 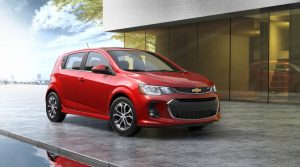 It’s becoming harder to find entry-level subcompacts offered in more than one bodystyle, which gives the Sonic and edge because it is available in two bodystyles.

And both are roomier than others in the class – as well as more versatile.

If you pick the sedan, you’ll get a 14.9 cubic foot trunk – nearly as much trunk space as several current mid-sized sedans, which are two sizes larger than the Sonic on the outside. 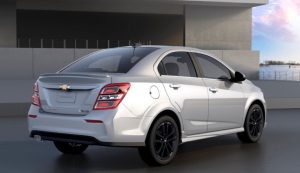 If you go with the five-door hatchback, you’ll get 47.7 cubic feet of cargo capacity with the second row seats folded flat. That’s comparable to the cargo capacity of several small crossover SUVs, but at a lower price point and with the option to select a manual transmission if you like.

Almost all 2019 crossovers are automatic-only.

Either way – sedan or hatchback – you’ll get an exceptionally roomy backseat, with 34.6 inches of legroom.

This is more than the Hyundai Accent’s got (33.5 inches) and the Accent is only sold as a sedan (with a 13.7 cubic foot trunk).

The Kia Forte – another possible cross-shop – has a slightly roomier back seat (35.9 inches) and the same size trunk – as well as more powerful standard engine (147 horsepower). But it’s also only offered in sedan form and its base price ($17,690) is proportionately (by about $1,400) a lot higher than the Chevy’s.

The Honda Fit is the most space-efficient car in the segment – with a 16.6 cubic foot trunk and 52.7 cubic feet of total cargo capacity. But it’s also one of the slowest cars in the segment. 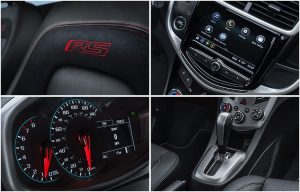 The Sonic is very well-appointed – even the base trim. All come standard with a 7-inch LCD touchscreen and 4G in-car WiFi, ten air bags and most power options.

You can get unusual-for-the-class (and price) features such as a heated steering wheel and remote engine start, too. 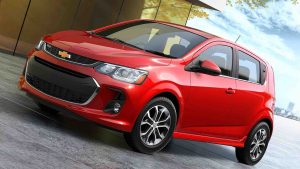 The Rally Sport package is still available (and standard with the hatchback) but it’s now entirely cosmetic.

The Sonic is a small car that’s bigger inside than you’d expect – and now under the hood, too.

The Me Too Corvette