The biggest problem for hybrids is that gas is really cheap. This makes it harder to sell a hybrid based mostly on how little gas it uses.

Which probably explains why the new Honda Insight hybrid focuses on things other than gas mileage  – such as how not like a hybrid it looks – as well as how unlike a hybrid it moves.

That it also goes as far as 55 miles on a gallon of gas is what you might call a bonus. 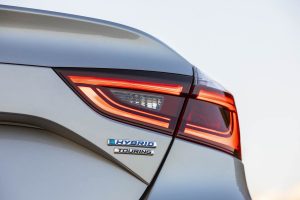 It’s about the same size as the compact-sized Civic – and the two cars share a common chassis – but the Insight has its own unique (hybrid) powertrain as well as it’s own unique exterior and interior look.

The big difference is vs. previous Insights.

First, it’s not a tiny two-door/two-seat commuter car with the emphasis on MPGs uber alles – as the original, 2000s-era Insight was. That Insight could go as far as 70 miles on a gallon, but could only carry one passenger – and not much else. 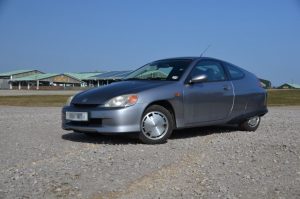 This Insight has four doors – and a passenger-friendly backseat that’s got four inches more legroom than its main rival, the Toyota Prius hybrid. It also has a 15.1 cubic foot trunk – as big as the trunks of many mid-sized sedans.

Another difference – vs. other hybrids – is the acceleration difference.

The 2019 Insight can get to 60 in about 8 seconds – about the same as most non-hybrid economy cars, none of which even approach the Insight’s 55 MPG capability.

The new Insight is also about two seconds quicker to 60 than other hybrids in this class, like the Prius and the Hyundai Ioniq. 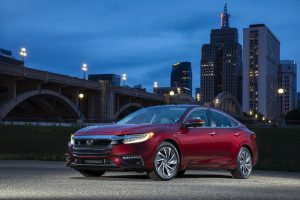 But with unleaded regular hovering around $2.20 nationally, that’s a difference which may not matter as much to buyers as the Insight’ other differences.

Prices start at $23,850 for the LX trim and top out at $29,110 for a Touring trim with a premium 10-speaker audio system and an 8-inch, high-resolution LCD touchscreen. 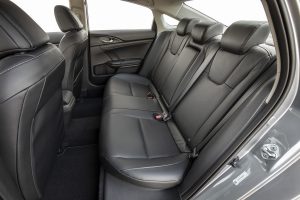 Much more room for legs in the second row than in the Prius and Ioniq.

Practically styled hatchback hybrids like the Prius and Ioniq have more  the cargo-carrying space behind their back seats.

No plug-in option – which lets a hybrid recharge its batteries without burning any gas – and enables the car to be driven farther (and faster) on just its batteries. Both the Prius and the Ioniq are available as plug-ins. 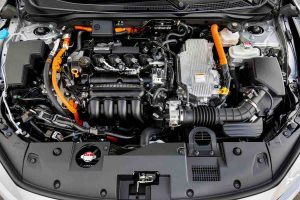 Like other hybrids, the Insight has a gas-burning engine and an electric motor/battery pack.

As in other hybrids, the gas engine – 1.5 liters – cycles on and off, to conserve fuel, with the battery/motor taking over when the gas engine isn’t running and also to supplement the power of the gas engine when extra acceleration is needed.

And here’s where the Insight differs from the other hybrids in the class. 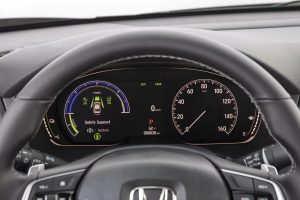 Which is why the Insight can get to 60 in about 8 seconds while its rivals need closer to 10 seconds to achieve the same velocity.

Honda is betting this noticeable difference in acceleration will persuade buyers more than the less noticeable MPG difference between the Insight and its two main rivals.

At least, in city driving.

The Honda’s 55 MPG city rating is so close  to its rivals’ numbers  – only 3 MPG behind the class-leading Prius and just 2 MPG behind the Ioniq – that in real-world driving, most drivers will probably not notice any difference. 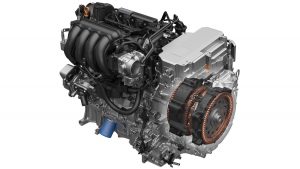 In any event, with gas cheaper than bottled water at the moment, 55 vs. 58 or 57 MPG is probably not a life or death concern for most people – especially if those people do a lot of in-town driving.

Of more concern – potentially – is the noticeable difference in highway mileage. 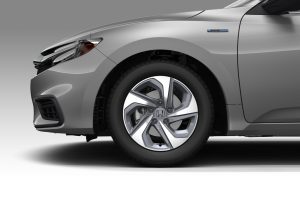 Part of the reason for this disparity is probably due to the fact that even the base LX trim comes standard with 16-inch wheels; rivals have 15s – which (being not as tall) and (usually) not as wide – reduce rolling resistance and so increase MPGs.

If you check the specs, you’ll find that the Prius with its optional (larger) wheels loses about 3-4 MPG overall. 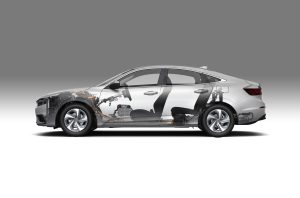 Honda probably could have pushed the Insight’s highway number to 50 MPG – or even 51 or 51 – riding on fifteens. But the 16s look better (the Touring’s 17s even more so) and help the car handle better – and with gas costing what it does, those differences will probably have more appeal to many buyers than two or three MPGs.

But if gas should become more expensive than bottle water, that almost 10 MPG difference on the highway could end up mattering more than how quickly the Insight gets to 60.

It’s not just that it’s quicker than the competition – although that’s no small thing. The Insight is also more relaxed than its competition – because it that extra margin of power in reserve its rivals haven’t got. 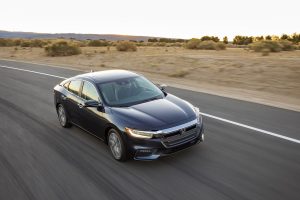 It isn’t necessary to put the accelerator pedal through the floorboard to get this hybrid to accelerate.

It merges easily – and quietly.

Like other hybrids, the Insight is really a part-time electric car that can toggle between internal combustion and electric drive. This duality eliminates the main hassles of owning a full-time electric car – having to worry about how far you can travel before the battery charge runs down and then how long you’ll have to wait while it charges it back up. 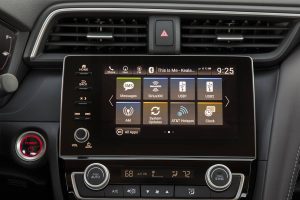 In a hybrid, the gas engine automatically takes over when the battery runs low – so you can continue to go. In this case, about 500 miles – much farther than any currently available EV can go. And you can refill the Insight’s 10.6 gallon gas tank in less than five minutes.

The Insight’s gas engine also recharges the batteries as you go.

Full-time electric cars have to stop  to recharge – and the minimum wait (if you can hook up to a “fast” charger) is about 30 minutes. If you can’t find a “fast” charger, the wait will be 8-12 hours. 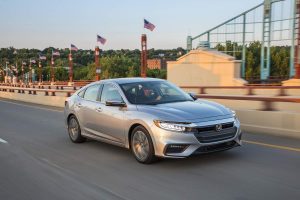 These hybrids have bigger/stronger batteries (and more powerful electric motors) and can go farther as well as faster than hybrids without the plug-in feature. They can also be recharged without burning gas, also like an electric car. And they still have the flexibility to revert to gasoline power when the battery pack’s charge runs low, so they aren’t tied to an electrical umbilical cord like a full-time EV.

But they still don’t go as far a full-time electric car (most have a battery-only range of about 20 miles before the gas engine has to step in to keep you rolling) and they usually cost several thousand dollars more than the same hybrid model without the plug-in capability – which saddles them with the same problem full-time electric cars have: Their high purchase price (vs. the low cost of fuel). 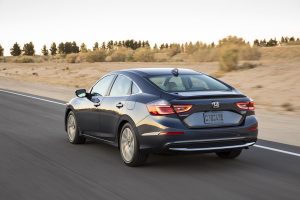 Honda doesn’t offer a plug-in version of the Insight – and may not, unless the cost of gas goes up enough to justify the higher price.

The Insight – also like other hybrids (and electric cars) – has a regenerative braking system, which converts braking force that would otherwise be lost as heat into electricity during deceleration. It’s a way to scrounge “free” electricity – or at least, get some without burning gas.

But Honda’s regenerative system is noticeably quieter than most, there’s less obvious drag – and pedal feel is normal. Others can be grabby or abrupt.

That’s the key difference between the Insight and its rivals:

It’s easy to forget it is a hybrid. 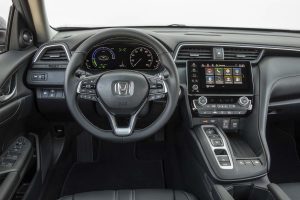 The Insight is a more passenger-friendly car than other models in this class, like the Prius and Ioniq – because it has significantly more backseat legroom: 37.4 inches vs. 33.4 inches in the Prius ( a difference of more than 4 inches) and 35.7 inches in the Ioniq.

It is also a much sexier car to look at and be inside of than the Prius and the Ioniq.

Tech is emphasized – but so is style.

For example, the pushbutton gear selector on the forward portion of the center console. It’s “drive by wire” – like the toggle gear selector in the Prius – meaning there’s no physical handle to pull and everything is engaged electronically. But the buttons for each range – arranged in graceful slimline sequence from Park through Reverse and Neutral to Drive over the course of a convex pad that rises to meet the concavity of your palm – is more pleasing to the eye  . . . and the touch. 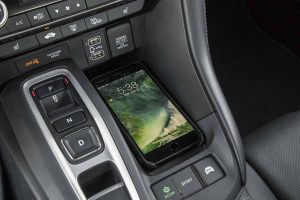 To the immediate right of the gear selector mound is a cubby that’s perfectly sized for your phone and deep enough to keep your phone from flying out – and under the seat.

The USB ports (two) are also right there – not hidden in a recess in the rear storage console, as is weirdly common practice in other cars. There’s a handsome, frameless-looking DisplayAudio LCD touchscreen above them – and a normal-looking gauge cluster positioned ahead of the driver, instead of a centrally mounted one (as in the Prius) that keeps the driver looking to his right while he drives rather than straight ahead.

But the Insight is also a sedan – and while it has a good-sized trunk for a compact sedan, its 15.1 cubic feet of space is much less than the 27.3 cubic feet behind the back seats in the hatchback Prius and the 23 cubic feet in the also hatchback’d Ioniq.

The  Honda’s rear seats do flip forward, though – creating a much larger opening than the usual keyhole 8×8 or so pass-through (via the center armrest) you’ll find in many sedans. This makes it feasible to carry longer items (and more of them) than you can in the typical sedan.

But the main plus – arguably – is that the Insight doesn’t make a big deal about its hybridness. The deliberate functional and aesthetic differences engineered into the first generation of hybrids – to make sure not just you but everyone else knew you were driving a hybrid – is no longer necessary, because hybrids are no longer new.

So the Insight is normal looking – as well as normal driving.

That it can get 55 MPG is almost incidental. 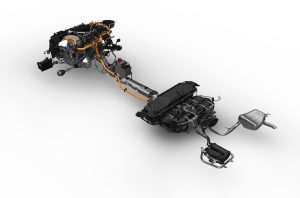 One of the other upsides to owning a hybrid is decreased maintenance costs – and longer intervals in between maintenance. For example, oil and filter changes. The Insight can go as far as 12,000 miles in between – about 2,000 miles more than the lowest-maintenance non-hybrid car and about twice as long as the average.

This is because the Insight’s engine is off as much as it’s on, even while the car is moving. The less it runs, the longer the oil (and other fluids and filters) last.

Most hybrids also have electrically-driven accessories, such as power steering and even the AC – which increases belt life as well takes mechanical load off the engine. 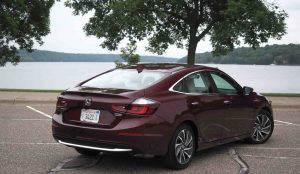 And because the battery pack (like the gas engine) works part-time, it will last longer. Including vs. a full-time electric car’s battery pack, which has to work all the time. Battery replacement – which every hybrid and EV will eventually need, because every battery loses its ability to hold a charge over time – is a very expensive proposition, typically several thousand dollars.

But so are other things.