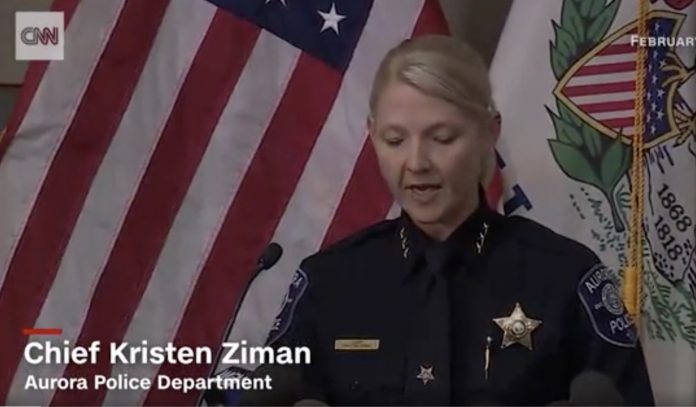 Just as bump stocks became the source of all evil after the Vegas shooting last year, endlessly pilloried by pols and their jackal media accomplices – both having latched on with upper and lower jaws to a fresh excuse to advance their agenda for controlling our guns.

A guy in Illinois shot up his ex-workplace and killed five people, apparently using a pistol with a laser dot sighting system. The local Obergruppenfuhrer –  i.e., “Lieutenant General” Kristen Ziman – did not mention the laser sight during her press conference about the incident, but the media neon backlit it in their coverage of the incident.

CNN’s headline practically screamed it: Shooter in Deadly Illinois Rampage Had a Gun With a Laser Sight!

Tyranny in America is an incremental story. One bite at a time, so to speak. TSA gate rape could never have been implemented had not the general public already been habituated to being forced to demonstrate sobriety (as well as all their “papers” being in order) at random roadside “checkpoints.” It’s not a Great Leap Forward, logically or psychologically, to get those same battered-down people to accept being forced to demonstrate they aren’t “terrorists” at the airport – and bus station and NFL game.

One thing follows another, like elephants at the circus.

It is the same with regard to guns – which are no more the thing in question than “sobriety” at checkpoints or “terrorists” at the airports. These are merely the incidentals – the pretexts deployed to justify the thing which is in question.

Observe that the armed government workers who man the checkpoints are immune from having to demonstrate their sobriety – or produce their “papers” on demand (by us, were we in any position to demand them).

Also that one can avoid Gate Rape if one flies privately. Because “terrorists” can’t afford to charter an airplane, apparently. But the power elite – this encompasses government muckety-mucks as well as those affluent enough to own a controlling interest in the muckety-mucks) can afford it – and so they avoid it.

And guns. Is it even necessary to elaborate? They aren’t to be “controlled” – they are merely to be denied.

Of a piece with the “climate change” shibboleth. Believe there is a crisis when you see the power elite reducing its “carbo footprint” rather than urging – and decreeing – that we reduce ours.

The Obergruppenfuhrer pictured above will not be “controlled” insofar as the weaponry she may avail herself of, anymore than Chuck Schumer’s cordon of AGWs will be forbidden bump stocks or laser sights.

The prohibitions are not general – nor the enforcement.

Which ought to tell people something, if they were to stop ad think about it a little.

Is Alloy Your Ally?