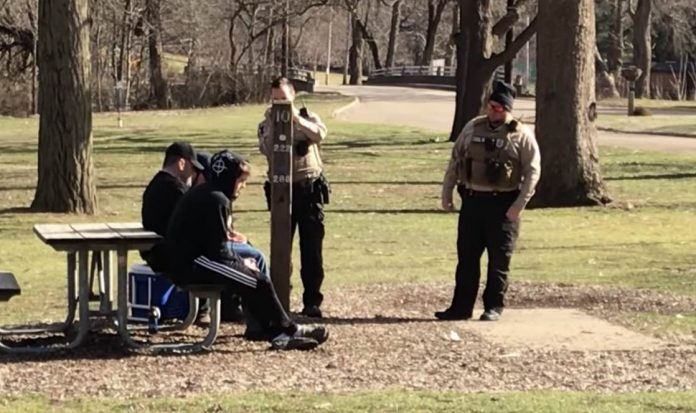 Here’s an interesting video depicting AGWs harassing and collecting from three guys harming nobody but in “violation” of a statute that prohibits drinking alcoholic beverages in public.

The men are sitting quietly at a park bench, minding their own business – when two Tacticooled armed government workers appear. The interesting part of the interaction is that the men – who are mulcted by the AGWs – thank the AGWs for mulcting them. They shake the hands of the two government goos who just relieved them of whatever it will cost them to pay the “fine” (another euphemism for bureaucratized theft, like “taxes”) as well as their cooler of beer.

It calls to mind the story of Stalin’s chicken.

History’s greatest mass-murdering collectivist demonstrated how he conditioned the people of the Soviet Union by having a chicken brought in, which he then roughly plucked until it was shivering naked. He then tossed it across the room, where it cringed miserably – until Stalin tossed a few grains of corn on the ground, whereupon the chicken ran almost lovingly back to Stalin and pecked at the miserable leavings at Stalin’s feet.

The American people are being – have been – conditioned just the same. They have been taught to revere their oppressors as “heroes” and call them “sir” and “officer” – a shameful display of servility toward armed government workers.

That is what they are. Not keeper of the peace (notice this hoary term is hardy ever used anymore in reference to the “work” performed by AGWs).

They exist to mulct and oppress.