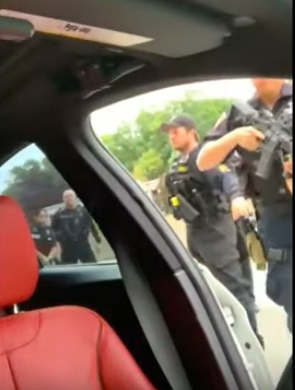 The man Hut! Hut! Hutted! in this video was driving home and as far as he knew hadn’t committed so much as a California Stop when he found himself being ordered out of his car at AR-15 point (“assault weapons” are not dangerous when pointed at innocent people by armed government workers) by a crew of body-armored AGWs, who also ordered him to perform awkward and incomprehensible gymnastic exercises such as extend both arms out of the open window of his vehicle and then open the door from the outside.

But this is not possible – for saaaaaaaaaaaaaaaaaaafety – in most modern cars, which automatically lock the doors as they are closed. The only way to unlock them is by depressing the “unlock” button (or manually unlocking) from the inside of the vehicle, which the man – with remarkable calm – tries to explain over the shrill order-barking of multiple AGWs, who are pointing military-grade rifles and high-powered pistols at him as he speaks.

Some people can’t perform these gymnastics for physical reasons. Arthritis or a torn rotor cuff would prevent some people from doing as ordered. What then? How about people who – knowing they haven’t committed any kind of crime – are confused, terrified and not thinking clearly because heavily armed men are screaming at them?

At this moment, for any of the above reasons, the man might have been Shavered – i.e., murdered by one of the dozens of itchy-triggered government-kitted psychopaths pointing loaded guns at him – for not “responding” to their orders and thus giving them the excuse they needed to say they “feared for their safety” and so had to end the man’s life.

But what was this man’s crime?

It wasn’t even a California Stop.

A few minutes prior, he drove past a female AGW who was standing on the street; she was startled by the sound of his modified BMW’s exhaust, saw smoke coming out of the driver’s window – and interpreted that as gunfire coming from the man’s car.

Without further ado, much less further investigation, this triggered – almost literally – one of the most over-the-top Hut! Hut! Huttings! on record. Fewer troops were called out to conquer Grenada.

It is a miracle the man escaped alive and unShavered given the amped-up hysteria of the swarm of AGWs he found himself confronted by – all of them “trained” to almost literally shoot first and ask questions later. If they ever ask them at all.

All because one jumpy AGW imagined the sound of gunfire and confused vape smoke with gun smoke.

In other words, no facts to indicate a “threat” to anyone’s “safety.” In courts, this used to be called hearsay – and worthless as evidence . . .  unless, of course, it is hearsay adduced by armed government workers.

Then it becomes evidence sufficient to convict.

Armed government workers can say they saw you perform a California Stop – and their saying so is sufficient to convict. Your saying you came to a complete stop is irrelevant.

Armed government workers can also drag innocent people out of their cars and point high-powered rifles at them on the basis of . . . vapor.

Luckily, the man did escape alive – but with his peace of mind no doubt shattered. Like many other victims of such unwarranted Hut! Hut! Huttings! this man’s blood will run cold whenever he sees another AGW. It is a reasonable response given the reality that this sort of thing could happen to anyone at any time – on the road or in your home – without reason.

All it takes is for one AGW to push the panic button – based on nothing more than her feelings about her “safety.”

Ours being entirely expendable