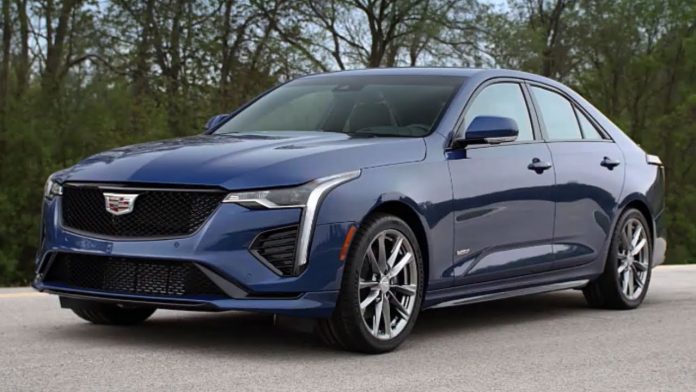 Cadillac is trying to keep the sedan’s head above water as a tide of crossover fever rises ever higher.

The rest of GM has already given up. Almost every car sold under the Chevy and Buick labels is no longer sold under either label – leaving almost nothing but crossovers, trucks and the Corvette, which – like the battleship Tirpitz in its fjord – holds a lonely vigil. 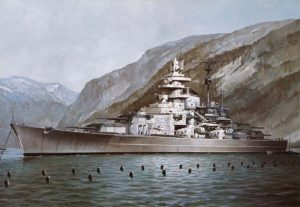 Cadillac has several new not-crossovers on deck and just arrived, including the new CT4.

The CT4 is the successor to the ATS sedan, which has been discontinued.

But a new 2.7 liter four cylinder engine with “dual volute” turbocharging is available that makes about the same power. 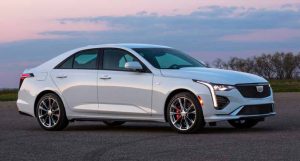 The CT4 is also the first other-than-Tesla to offer full self-driving capability, which Cadillac calls SuperCruise.

Prices start at $33,990 for the rear-drive Luxury trim equipped with a turbocharged 2.0 liter engine paired with an eight speed automatic.

Premium and Sport trims are available, in both rear-drive and AWD iterations.

For those wanting V6 performance and four cylinder mileage, Cadillac offers a new 2.7 liter “Dual-Volute” turbocharged four cylinder engine paired with a ten-speed automatic. It produces 309 horsepower in the rear-drive Premium Luxury trim – which lists for $40,990 with RWD and $44,10 with AWD – and 325 in the highest-performance CT4-V, which also gets a limited slip rear differential and standard magnetic ride control. 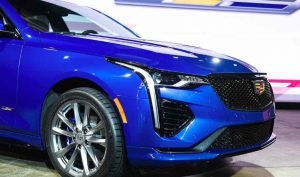 The CT4 is an all-new model. 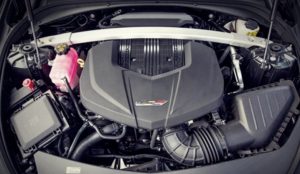 The outgoing ATS came standard with a four and offered a V6. The new CT4 offers only fours – in line with trends away from bigger engines in favor of boosted engines.

The idea being to reduce gas consumption overall without reducing power on demand.

The standard 2.0 liter four with a twin-scroll turbo produces 237 horsepower and uses a  “dual volute” turbo that isolates the exhaust pulses of each of the  engine’s four cylinders, so there’s no lag in between each cylinder’s pulses. The idea being to not only match the power output of a larger engine without a turbo but also to match the immediacy of the throttle response of an engine without a turbo. 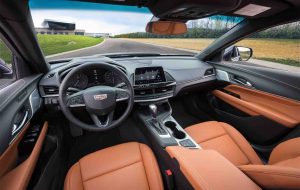 The 2.7 liter engine (which GM also uses in its 1500 series truck) makes as much as 325 horsepower (in the “V” trim) which is nearly as much power as the much larger 3.6 liter V6 that was optionally available in the old ATS – and less thirsty.

In part because it’s paired with GM’s new ten-speed automatic. This transmission has multiple overdrive gears on top, reducing revs – and saving gas.

Official EPA numbers weren’t available in mid-Feb. when this review was written but GM expects the 2.7-equipped CT4 to do much better than the ATS V6’s 20 city, 30 highway.

While still getting to 60 in the low five second range. 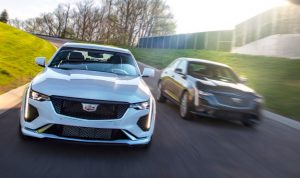 The signature feature of the CT4 is the option to let the car drive itself. Engage the Super Cruise and take your hands off the wheel and your eyes off the road.

Of course, you’re not supposed to do that.

GM – like Tesla – says that the driver must always be ready to “intervene” when the situation demands it and should always be paying attention to what’s going on  – as opposed to what’s on the phone. 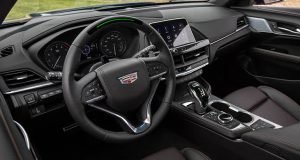 Which is fine – and responsible, given that self-driving tech isn’t infallible. But the temptation to leave the driving to the car is there – and probably shouldn’t be, so long as the driver is still expected to be responsible for driving the car.

It’s also at odds with the point of owning a sport sedan, which is supposed to be all about driving. It might be more fun if the self-driving feature had been programmed by a driver – someone who enjoys threading the needle, looking for openings – and exploiting them. But GM’s self-driving system is programmed by a Clover. Or rather, a lawyer. It is set up to accelerate saaaaaaaafely (read, slowly) and will not emulate the wheelman skills of Michael Schumacher. 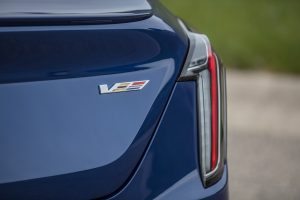 It keeps pace with the ebb and flow. It slows down if the car ahead does. It maintains your lane. All the while, you’re supposed to pay attention – and be ready to “intervene.” Which makes the passenger seat the best place to be in this car, since you can at least text or take a nap without being guilt-tripped – or sued, if the car drives itself into another car.

Better to just drive the thing yourself. Which you’ll probably want to do, because it’s a snappy little thing – with the power going to the right wheels – and even though you can’t get more than a four, the optional four makes up for its lack of cylinders with almost-V8 torque (380 ft.-lbs. in the V) which is almost 100 ft.-lbs. more torque than the ATS’ optional V6 put out (285 ft.-lbs.) and it puts it out at 1,800 RPM rather than 5,800 RPM. 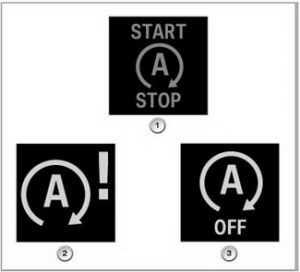 Unless you’re stopped – and ASS has cut the engine off. Then there is a slight lag . but it’s not because you’re waiting for the boost to build. You wait a moment for the engine to start. It’s not a long moment, but it’s just as perceptible as turbo lag but far more annoying because it re-establishes what “dual volute” (and twin scroll) turbocharging has pretty much gotten rid of.

And for what? An ASS-addled car might go an additional mile or maybe even two on a gallon of gas courtesy of ASS. Who cares? A gallon of gas costs less today in real terms than it did back in 1965 and people who spend $40k on a luxury-sport sedan are probably not going to get excited over a 1-2 MPG gain when it costs them time and annoyance.

The CT4’s ASS is relatively smooth but that is like a relatively painless novocaine shot at the dentists. It’s much smoother to just leave the engine running.

If ASS were optional, it’s probable almost no one would freely buy it. That ought to beg a question which Cadillac – and the rest of the car industry – should be asking about ASS, instead of offloading a regulatory compliance annoyance onto its customers and marketing it as a “feature.”

GM’s magnetic ride suspension, on the other hand, is superb. It was originally developed for the Corvette, which gives you some idea. Like no-lag turbo-boost, it delivers that mesmeritic combination of track-day firmness and luxury-car compliance, in moment-to-moment seamlessness. The faster you drive, the firmer it gets. Dial it back, and the ride does, too. 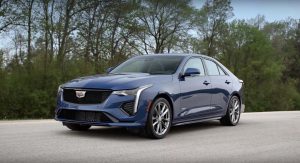 The CT4 is a great-looking car that’s probably too small a car for many. Though it’s significantly larger on the outside than the outgoing ATS – which was 182.8 inches long overall vs. 187.2 inches long for its almost-mid-sized replacement, it’s just as small inside as its predecessor. 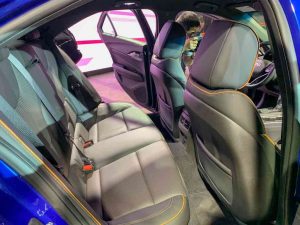 Leg (and head) room for the driver and front seat passenger isn’t a problem but the backseat has only 33.4 inches of legroom (slightly less than the ATS’ 33.5 inches) and headroom back there is almost two inches less than up front (36.5 inches).

But with an extra pair of doors. 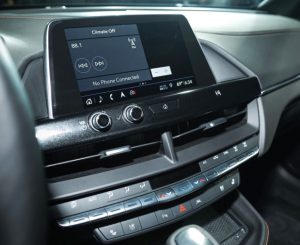 All trims come with a much-larger (8 inch) LCD touchscreen in the now-common “floating tablet” style on the top of the center stack. It’s easier to use than the ATS’ now-dated Cadillac User Experience system. But how long will it be before this system becomes dated in its turn? This is a generic problem with touch-screened new cars. We replace our phones and laptops every two or three years; maybe five at the outside – because the pace at which tech advances obsolesces tech at a rate that is unprecedented.

It is “no longer supported” – or it just stops working – and isn’t worth fixing. That’s ok with a phone or laptop that costs a a couple hundred bucks. But when it’s a car that costs $40,000 bucks?

GM says the CT4’s tech is designed to be updatable “over the air” – but the hardware will be fixed in situ. 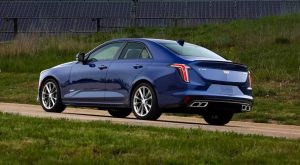 The years ahead will be . . . interesting.

The ATS was  too small – and too expensive.

Its replacement isn’t as expensive – and that may just make up for its smallness.

And performance may be made up for in 2021, when a Blackwing version will reportedly become available. This one will resurrect the V6 – and turbocharge it.

But don’t expect it to be inexpensive

If you’re sick of crossovers (and FWD cars) Cadillac’s got something else for a change.