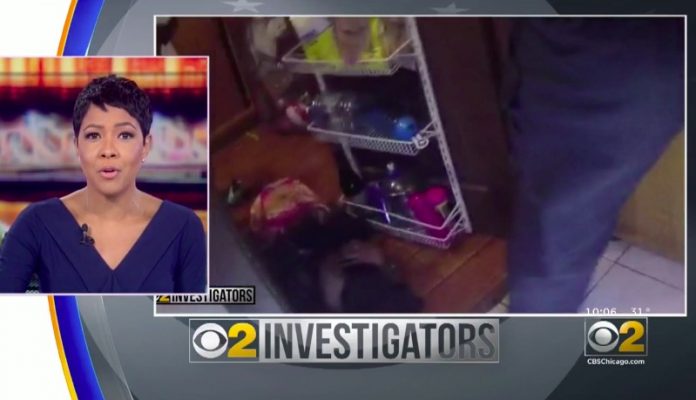 A family in Chicago – the wrong family, as it turns out – was Hut! Hut! Hutted! by a feral gang of armed government workers who didn’t want their doings seen.

A local CBS news affiliate described the “raid” on the home of Toni Tate. They “just came in flying, guns drawn,” she said. The AGWs pointed their guns at her children – who were a clear “threat” to the “safety” of these “heroes,” as they are frequently styled (by themselves and their Stalin’s chicken adulators).

Tate’s teenage son is soon on the floor, cuffed, with a high-powered rifle pointed at his head. “We were both handcuffed for about almost an hour,” said Tate, who can be seen on the body camera video wincing in pain while handcuffed and repeatedly saying she the handcuffs hurt.

Can’t be too careful when Officer Safety is at issue. Even when the “officers” – who commissioned them? – have no lawful business being there at all.

Tate’s home was the wrong home, it turns out.

Perhaps realizing how bad this all looks, an AGW named “sergeant” Anthony Bruno can be heard ordering his fellow Hut! Hut! Hutters! to “kill” the “cameras” – i.e., turn off their body cameras, which are supposed to remain on at all times… according to the law. Which AGWs aren’t bound by – apparently.

This Bruno creature have been caught doing the same thing previously – and are still “on the job” – and Hut! Hut! Hutting! According to the CBS affiliate, three innocent children had guns pointed at them as they were forced to the ground. Police body camera video shows one of the siblings face down on the floor crying, “Please do not shoot me, please.”

After terrifying that 14-year-old, her 7-year-old brother, and her 11-year old-sister, AGWs interrogated them without a parent present.

Both families are now suing the Hut!Hut! Hutters! – but it’s the taxpayers who’ll pay any settlement. No charges have been filed against the Hut! Hut! Hutting! AGWs, either.

Because the laws hat apply to us don’t apply to them.