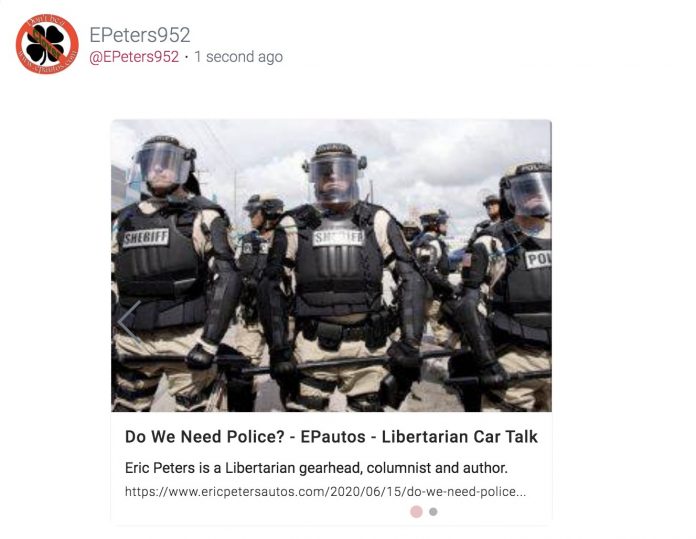 I wrote a couple weeks ago about being shadow-banned by the Tech Oligarchs who run Twitter and Facebook. I can still post links to my articles but they waft into a kind of memory hole now. A month ago, I’d “Tweet” (loathsome term) a link to something and traffic on EPautos would go up – a lot – immediately. Same when I did the same on Facebook. Lots of people were seeing the links and clicking and reading.

Then, just like that, no more. Literally. No more.

The upticks in traffic stopped. A new “Tweet”  or Facebook post would result in not a blip on the screen. This is what shadow banning is – and it’s very clever. The victim isn’t overtly banned – that’s much too obvious. Instead, his posts just don’t get distributed – which achieves the same thing but in a way that’s much subtler. It’s very much like the Free Speech Zones invented by The Chimp. People could exercise their right to speak . . . just far, far away from anyone who might hear it.

Well, the solution to online Free Speech Zones is to bust out of them.

Which I hope I just did – and encourage you to do, too. I just joined Parler – an outfit that doesn’t ban or shadow ban people for Wrongthink. My handle is EPeters952 and I’ll be posting under that handle there from here on out. Please “follow” me if you like my stuff – click here – and help me resurrect what Twitter and Facebook are doing their best to curb stomp!

The Cost of Virtue Signaling