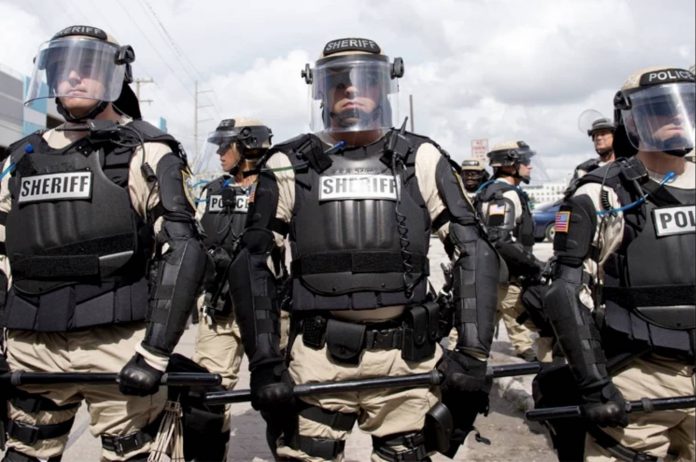 The question in this headline is being asked but is improperly framed. Who is “we,” white man – figuratively speaking?

Police – armed government workers, more accurately described – are essentially a service, though one “provided” at gunpoint. And that is the proper question to ask. Should Smith be obliged to fund a service he neither uses nor feels need of? Which he may object to on moral grounds?

Because Jones desires it?

This problem of AGW brutality is an us problem – because we’re all of us complicit.  Because we finance it. Many of us without objecting to it. This is – well, was – the argument made by ol’ Osama to justify the various attacks attributed to him. He said that bombs falling on Muslims were built using dollars paid by Americans, who didn’t object – or at least, didn’t stop paying.

He had a point.

How much a threat would AGWs pose to all of our lives if they lacked the military hardware to Hut! Hut! Hut! us with?  Who pays for the Batman Belts, the multiple magazines and high-capacity Glocks? Who pays the settlements awarded to the victims of AGW excesses?

But not all of us want these “services.” Which – never spoken of, for the obvious reason – is precisely why they are forced on us. Which ought to raise another question: What does it say about the value of a “service” you’re forced to pay for?

The answer to that one is obvious, too.

Now imagine if you didn’t have to pay for it. If the “service” offered could be refused. If the provider was obliged to convince you of the value of what he offered – and knew you could cancel the “service” if it ever became unsatisfactory.

That is the solution to the problem of armed government workers. Systemic abuse can only be maintained in an environment of corruption and coercion. A business that bilks its shareholders, abuses its employees and gyps its customers does not remain in business – provided, of course, it lacks the ability to coerce.

There is arguably a real need for protective services; the fact that many people pay extra for this – for private security – because the “security” they’re forced to pay for doesn’t provide it – speaks volumes.

Most people don’t want their stuff stolen, their property damaged, their wives (or themselves) assaulted by thugs. Many would willingly pay for protective services, just as they already do for private security and volunteer fire services.

What must not be spoken of aloud is that many fewer would willingly pay to fund their own fleecing for “speeding,” not wearing seatbelts, ID “checks” and so on. They’d probably pay money just to be left alone – in the manner of handing over a sum of cash to a mafia enforcer in exchange for the same promise.

The point being we have a mafia problem. And the answer to that problem is, first of all, to tear apart the idea that “we” need any “service” at gunpoint. The latter in air quotes to emphasize that it isn’t a “service” when you can’t say no to it.

It’s extortion, nothing more. The paying off of a schoolyard bully in “exchange” for him maybe not stealing your lunch today. The bully grown up to manhood – if you can call it that – wearing a quasi-military outfit, often with Cracker Jack Box “sergeant” stripes or “captain’s” bars.

If AGWs had no remit to steal our money they’d have no means to steal our lives. It’s really that simple – and that easy to return to. There haven’t always been armed government workers in this country. Or even “law enforcement,” as they like to style themselves.

And we weren’t always forced to pay for “services” not all of us or even most of us asked for.

Just because that’s changed doesn’t mean it can’t be changed. We are where we are today because of a series of questions not asked – and answers never solicited. If we asked them again – and our answers were respected – we might just find ourselves in a better place tomorrow.