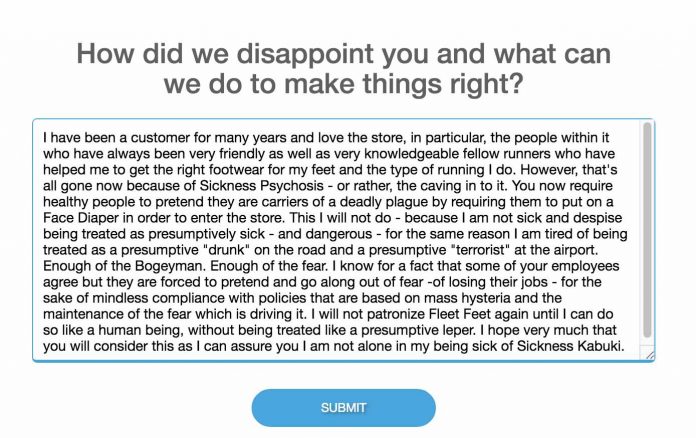 I bought new running shoes the other day – just barely and probably never again. At least, not from the store – Fleet Feet in Roanoke – where I have been buying my running shoes for more than a decade.

Because of the Diaper.

My refusal to put on this latter-day analog of the yellow star – and the store’s insistence I and everyone else do so. Even though some of the store’s employees agree it’s a vile and vicious policy, but – as one of them confessed to me while wearing his Diaper – it’s either go along with it or they get shown the door, too.

I got in the door – barely.

The store had been re-arranged since the last time I was there before the mass hysteria set in. No more personal contact. They used to measure feet, fit shoes. Now they don’t because to be in proximity of a customer – let alone touch one – is dangerous!

Everything is prophylactic now – except without need, on account of the hysteria. Because of the playing along with it – which is what maintains it.

They now have a desk right by the door – and beside the desk, the box of yellow stars, the degrading and medically useless (but psychologically very effective) piece of cloth they insist people to wear – in order to maintain the mass hysteria and the sense of hopelessness and despair which attends.

This store and others like are perpetuating both of those awful things – and conditioning people to accept much worse things soon to come if this is not stopped –  by making it almost impossible to get in the doors anywhere without wearing the loathsome totem, thereby showing or at least making it appear that you’ve submitted to the hysteria. 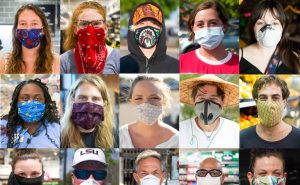 Thereby showing they can make everyone submit by locking anyone who doesn’t out.

For the same reason I won’t ever put on a red armband with white circle and you know the rest, either. Not only for my own sake – and principles – but because I understand what it would mean to wear that if others saw me wearing it.

Which is why I will never wear this, either. 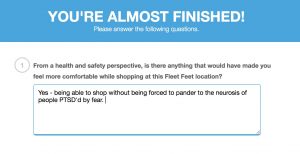 I tried to act normal by immediately asking the Diapered person at the table whether they had a new pair of the shoes I was wearing in size 11s. This deferred Diaper Pushing for a moment. But within a few moments, the woman at the desk urged a Diaper on me and of course I refused – not being sick and very tired, like some of you, of being expected to pretend otherwise for the sake of the not-well-in-the head. The people PTSD’d by fear who have managed to shut down not just stores but minds.

Or at least, the speaking of them.

Healthy people are terrified of saying what’s on their minds – and not putting something on their faces – out of fear of jangling the nerves of a Sickness Psychotic. The latter are being treated with a disgusting deference of a piece with the cringing before race hustlers like Al Sharpton, who built a career on accusing anyone who questioned him about anything – most especially his motives – of racism. 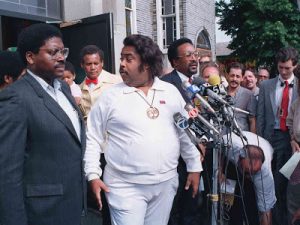 At least half the country has decided it’s better to shut up and Diaper up to keep the Sickness Psychotics quiet than to tell them to bugger off.

Or – as a reader suggested – give it back to them by asking them where’s their flea collar when they ask you about “your” Diaper (the latter in air quotes for a very good and related reason; see here for more about that).

It’s just as possible that they might have fleas as it is that you might be “sick” – and don’t they care about “the community”?

Fleas can transmit something more lethal than the WuFlu, too. Bubonic plague doesn’t have a 99.5 percent recovery rate; children aren’t essentially immune to its ability to kill and  those who get this virus are almost never asymptomatic and when they do get sick, they spread it  . . . unlike two-thirds of the “cases” – the cases! the cases! – of WuFlu.

We are now beyond the reach of reason – because of hysteria. And because of a fog of fear that has enveloped most of the country, which has addled the minds of millions and suppressed the courage of millions more. The latter being the ones who aren’t sick but afraid to pretend otherwise by the pressure of unfounded shaming and the threat of being seen as not going along.

These are the ones willing to participate in the maintenance of the hysteria which is perpetuating the fear . . . not out of fear of sickness but fear of the psychotics who have lost their reason but now control practically everything.

Instead of standing up to these people, people are standing down – and Diapering up. This is no different than accepting guilt for owning the slaves your great-great grandfather never owned and opening your wallet to pay reparations for the harm you never caused to people you never met. 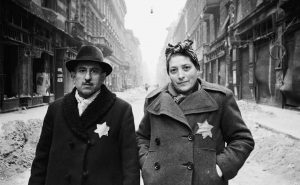 But guilt and fear are fungible. Get people to stand down to Al and they’ve already stood down to Diaper’d Donna.

I bought my new shoes – outside the doors. The Diapered unfortunate brought them out to me, as I stood suppurating. Which I wasn’t, of course – which is why he wasn’t bothered, though he remained Diapered as we talked about the hysteria and the loathsome kabuki both he and I were expected to play and which he had to play – if he wanted to keep his job.

I expressed my sympathy. I understand. But I will not be back. Fleet Feet has lost my business, as I expressed to them in the customer (dis)satisfaction survey screen shotted and posted with this article – because staying sane – and free – is more important  than a new pair of shoes.

Free – Why That’s My Favorite Price!