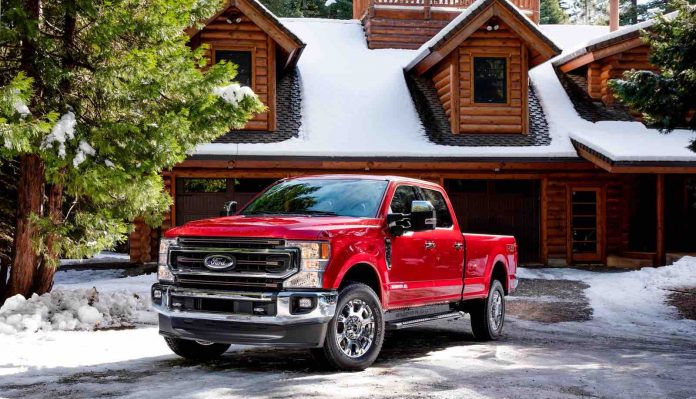 There are three main contenders in the three-quarter-ton (2500) class but only one of them is in the four figure class . . . when it comes to torque. 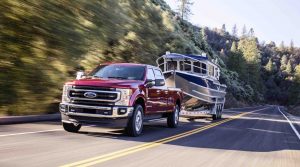 Like its main rivals – the Chevy Silverado 2500 and Ram 2500 – it comes standard with a big (gas) V8 and offers an even bigger gas V8 – as well as regular, extended and crew cab bodystyles with an eight foot long bed available with any of those cab styles – something not available in many light-duty/half-ton trucks, which don’t come standard with a big V8, either.

But the big Ford offers – by far – the brawniest diesel as well as the highest maximum tow rating of the bunch. 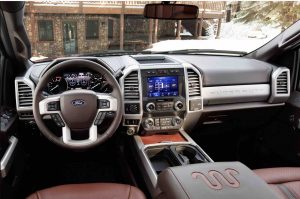 It also has something else – an all-aluminum (rather than steel) body – which has its good and its bad points. 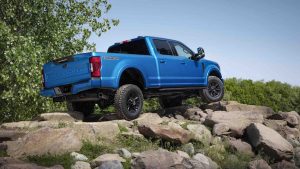 Not an overhead cam V8.

Literally a step up.

F250s so equipped get a 2-inch lift kit that raises the body up that much vs. the standard truck, 35-inch Goodyear M/S-rated knobby tires, a limited-slip front differential, locking rear diff, rock-crawl mode for the transmission and a low-speed cruise control system unique to this version of the truck.

It has 10.3 inches of minimum clearance and can ford 33 inches of water. 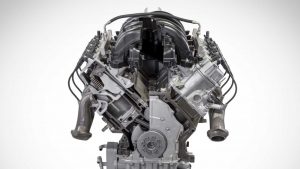 The hunkiest of the bunch.

Diesel option costs almost as much as some cars do.

Getting into the bed takes a step ladder. 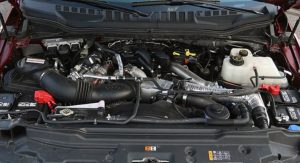 For more – of everything – the F250 offers a massive 7.3 liter V8. It is the biggest V8 you can get in . . . anything. It is also a pushrod/overhead valve V8 – Ford’s first in a long time. This will address concerns some have about the long-term durability of OHC engines in trucks and is without question a simpler engine, with fewer parts.

Which is more than the Chevy Silverado 2500 can pull with its top-dog 6.6 liter Duramax turbodiesel and essentially as much as the Ram 2500 with its optional 6.7 liter turbodiesel can handle (19,680 lbs.)

And there’s more to come – if you choose the Ford’s third available engine. 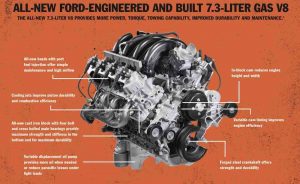 It’s the 6.7 liter Powerstroke turbodiesel V8, the only four-figure V8 you can get (shy of a Peterbilt) and the only one in the class rated to pull a foundation-ripping 22,800 lbs.

The standard 6.2 V8 is paired with a six-speed automatic but both the 7.3 gas V8 and the 6.7 liter Powerstroke diesel come standard with heavy-duty ten-speed automatics that have a very deep .63 overdrive in tenth. All three engines can be paired with rear-drive (2WD) or 4WD and with any cab/bed or trim configuration.

Ford doesn’t upsell you a cab or trim before it will sell you a bigger V8.

Or the diesel V8.

PS: Neither of the F250’s gas V8s are direct-injected. 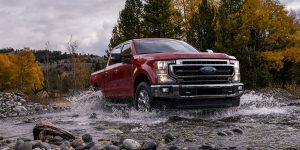 Really capable trucks with solid axles and leaf springs like this one used to be a handful. They were great on the job site, just the ticket for getting your Airstream to the camp site. But they were like Mr. Universe-level bodybuilders in that they were just too big- and much too clunky – for everyday driving. They rode like your grampa’s farm tractor and were just as loud, almost.

Amenities? If you had carpet you were riding in style.

Now there’s only a pea under 30 or so mattresses’ worth of difference in ride quality, noise and even handling between a half-ton luxo-truck like the 2020 Ram 1500 I wrote about last week (see here) and this truck. 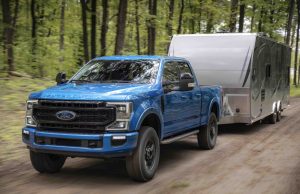 Well, once you’re inside.

As upsized as the current crop of half-ton trucks are, the 2500s are even more so – especially vertically. Running boards are not optional – unless you’re an NBA forward. You climb up, pull yourself in.

But once you’re settled in, the rest is easy.

It’s almost as if – no, it’s exactly as if – anyone could drive this truck. Like a friend of mine, who is female and about half my size. Power the seat forward, adjust the power tilt and telescoping wheel. Push the start button and put the drive-by-wire automatic into the gear. Off she goes! 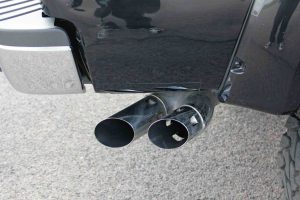 Another thing you’ll notice about this Ford is that while it’s tall it’s not too wide. It’s only about five inches wider (80 inches) than, for instance, a current Camaro (74.7 inches). That means it’s not a constant chore to keep this truck in its lane rather than the opposing lane. There’s Lane Keep Assist, of course – but it’s an assist you won’t need and can (thank god) turn off.

If you buy the diesel, you can turn on the exhaust brake to keep the big lug from picking up too much speed in its lane while going downhill. You’ll feel like a Peterbilt driver – just without the Peterbilt.

Also, you can go far – despite the big-rig appetite of the big V8s.

That’s a lot of gazzuline – or diesel.

Enough to travel four digits – even at 25 MPG.

Ford’s Super Duty series of trucks used to look very different from the light-duty F-150. But then styling overlap happened and the Super Duty look  – high bed walls, inverted hockey stick driver and passenger-side door uppers – became the look of the half tons.

What separates the Super Duty from the half-tons of today – aside from the heavier-duty underthings and the much bigger things under the hood – is the limitless configurations of cab and bed. The eight-foot bed goes with any cab – not just the regular cab.

And you can still get a regular cab, too.

Carpet isn’t the only standard amenity, either. The base XL has AC, telescoping tow mirrors and a stereo with four speakers. It comes with manual windows, the one throwback to what a three-quarter-ton truck was like. 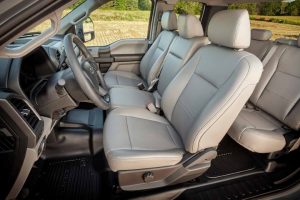 Manual roll-up windows have definite advantages, including being able to roll them up – or down – exactly as far as you want them to go. With power windows, it can be almost impossible to get the window to stop going up – or down – exactly where you wanted. And manual windows are simpler. They rarely fail and if they do, it’s a mechanical issue – not an electrical one.

And not a body control module issue, either. 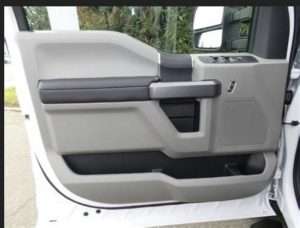 Many people get a rude surprise when they learn that – with modern vehicles – its not just an electric motor or electric connections that you have to deal with also but another computer that controls what goes up and down.

And that can be not cheap.

Power windows come standard in XLT and up trims, along with Ford’s Sync 3 infotainment system piped through an eight-inch LCD touchscreen.

If you want two-tone leather seats (with three-stage heating and cooling), a power tailgate and a very powerful Bang & Olufsen premium audio rig to go with your rig, they’re available in the Platinum and Limited trims. These also come with power-deploying running boards; the Limited adds a panorama sunroof – just like a Lincoln (that can haul several Lincolns). 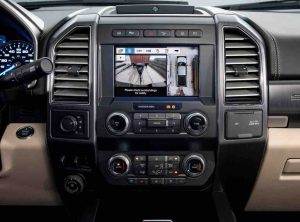 And even that isn’t the end of it. You can get a King Ranch version with power-adjustable pedals and a heated steering wheel.

There’s very little that’s not available in the F250 that you could get in the F-150. But you can’t get the F-150 with any of the monster-truck V8s that come in the F250. Or the car-crushing Tremor package.

This is interesting because there’s more than a little price overlap between the half-ton F-truck and the three-quarter-ton F-truck. Especially if you make it at least kind-sorta comparable in terms of capability. 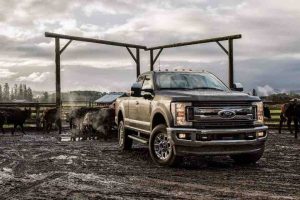 Ford has made the F250 so appealing it may pull sales away from the F-150!

At least it’s all in the family.

This truck’s big weakness – literally – is its aluminum body. Not so much in terms of strength but rather cost.

Ford describes this as “military grade” and it surely is. The military uses aluminum (in airplanes and such) to reduce weight more than impart strength. Ford used it in the F250 (and F-150) for the same reason.

The question is whether shaving (roughly) 400 pounds of weight by using aluminum rather than steel is worth the cost to truck buyers.

Pick-ups don’t have to fly, after all. 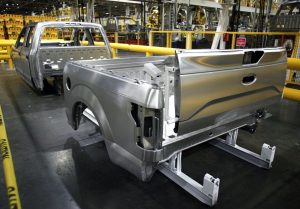 The main reason for the aluminum panels isn’t even to reduce weight – per se. It is to reduce the pressure coming from Uncle to increase fuel economy and (lately) to decrease carbon dioxide “emissions” (rebranded as such because the actually harmful ones are no longer plausibly an issue justifying further regulation).

Are either of these things of importance to the people who buy trucks?

The F250’s mileage isn’t dramatically better than its rivals.

Uncle doesn’t even require manufacturers of vehicles in this class to publish them. Because everyone – even Uncle – knows that people who buy 2500s (and up) care about gas mileage about as much as Trump cares about not offending snowflakes.

All else being equal, the Ford’s mileage is probably 2-3 MPG better overall than it would have been if it were steel bodied and lugging around another 400 or so pounds.

Is it a big sell? Probably not.

But people who buy heavy-duty work-intended trucks do care a great deal about durability, the ability to withstand damage and the cost to fix damage. Aluminum is tough in some ways; for example, it can flex more than steel without deforming permanently. And of course, it corrodes differently than steel.

Bu if you bend it too far – or a deer bends it too far – it’s harder to pull back into shape and welding it is a higher art form than steel welding. That adds potentially higher repair costs which will probably also result in higher insurance costs. 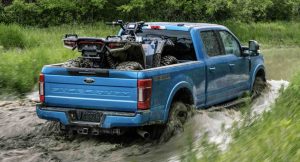 It’s the one debatable aspect of this otherwise King-of-the-Hill truck.

If this truck were made of steel, it’d be so far ahead of the pack it could stop by the side of the road for a Big Gulp and a pee break and still beat them to the finish line.