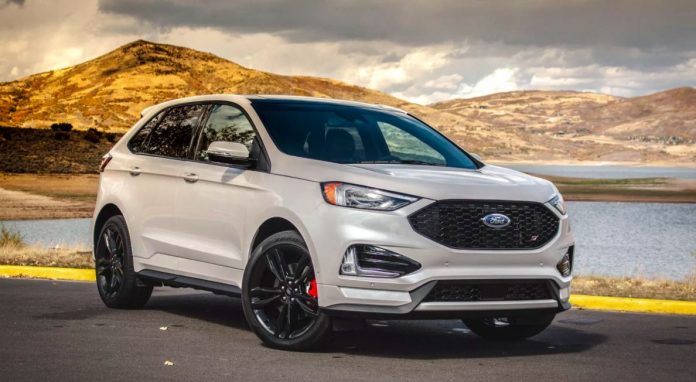 The Ford Edge has enough room for a third row  . . . but it hasn’t got one. What it does have is almost as much room in its second row (40.6 inches of legroom) as it does in its first.

Plus more room behind its second row  . . . without folding them down.

And that’s two things most three-row SUVs haven’t got.

It has something else, too. 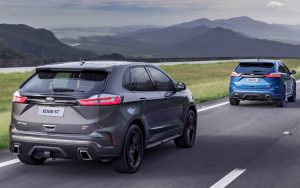 The Edge is a mid-sized crossover SUV with a full-sized inside. It hasn’t got room for seven.

But it has more room for five – plus their stuff.

It also has more power – as much as 335 horsepower, if you order the available twin-turbo V6. Which is another edge the Ford has over its rivals in the class, many of which don’t even offer a six.

Prices start at $31,100 for the base SE trim, which comes with a 250 horsepower turbocharged four-cylinder engine and front-wheel drive.

AWD is available optionally and increases the SE’s price to $33,095.

You can get the look of the ST – without the twin-turbo’d engine – and its higher MSRP. The ST-Line gets similarly aggressive-looking 20-inch wheels, black-finish exterior trim and suede covered seats with contrast-color stitching. 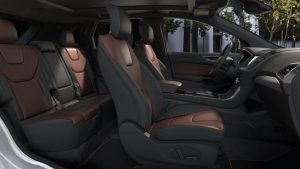 Lots of room in both rows – and behind the second (without having to fold it).

Comes standard with more power than others in the class – and offers even more. 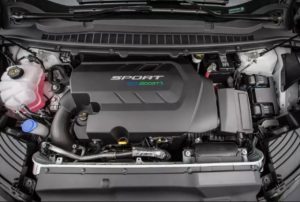 The Edge comes standard with one of the strongest engines in its class – a 2.0 liter turbocharged four that makes 250 horsepower. This is more horsepower than you can get in other medium-sized crossovers like the Mazda CX-5, which comes standard with a 187 hp 2.5liter engine (not turbocharged) and offers a version of the same-sized engine with a turbo that only makes 227 hp.

Ford offers even more power than that.

That’s V8 torque  – and acceleration – without the V8. 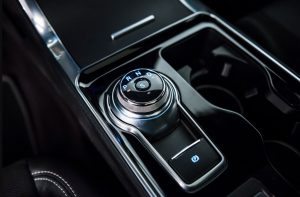 The ST Edge hauls – zero to 60 in in the mid-high fives -which isn’t far off the bumper of a Mustang GT (with a V8) . . . but it doesn’t pull as much as you might expect given how strong it is.

Ford says the maximum you can hitch to this thing is 3,500 lbs. Which is still more than possible cross-shops like the CX-5 (which maxxes out at just 2,000 lbs. of trailer-towing capacity with its optional engine) but it’s not much of an edge vs. the others.

But it may also be marketing. Ford also wants to sell Explorers, which tout a 5,600 lb. maximum tow rating. In fairness, the Explorer is built on a rear-drive platform that’s better-suited to pulling a load than the Edge’s FWD-based layout. Still, one wonders whether Ford deliberately under-stated what the Edge can pull so as to not pull away sales from the pricier Explorer. 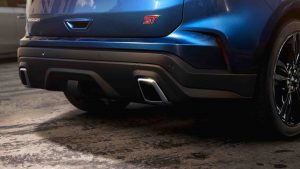 Still, the fact that you can get a V6 in the Edge is itself an edge given how uncommon six cylinder engines are in 2020 crossovers. The Edge still offers one chiefly – probably – because it’s actually a 2015 crossover, just made this year. Not much has changed since this model was introduced some five years ago – but the political/regulatory situation has changed a great deal. It’s why newer-design rivals in the class don’t offer more than a four.

Both of the Edge’ engines are paired with eight-speed automatics but the four can be paired with – or without – all-wheel-drive in all trims. The stronger V6 is paired only with AWD – and is only available in the performance-themed ST trim.

Speaking of performance – and mileage.

Both engines require premium to deliver on their best-case numbers. This is also a function of the Edge’s age. Five years ago – and before five years ago – turbocharged engines generally needed premium to take full advantage of the boost. Lower octane caused the engine’s computer controller to dial back the boost – to avoid knock (and possible engine damage).

This was so because turbocharged engines were performance engines. Put another way, the turbo was installed to increase performance. The price for this – which performance-minded buyers were happy to pay – was having to pay extra for premium.

In the intervening years, turbos have become the method by which to maintain performance. To get a smaller engine – installed to increase gas mileage – to perform as if it were a larger engine when on boost.

To be – essentially – an economy engine.

People who buy economy engines do not like paying extra for premium gas. Thus engineers have figured out how to maintain the boost on lower octane regular unleaded – which gives Edge rivals an edge, especially as regards the Edge’s base engine – which ought not to require premium for exactly that reason.

And because rivals’ base engines (and some of their optional engines) don’t.

If you are a Batman fan you’ll like driving the Edge; or rather, the view from the driver’s seat of the Edge.

The hood spreads its wings, bat-like, rising to meet the arched-up quarter panels.  The windshield wipers sweep inward rather than to one side. This thing needs a mask all right – but not the kind currently in vogue.

The ST has the goods to back up the looks, too. It is quicker than V12 supercars used to be – or close to it. But since most Batmen can’t afford the ST, they’ll have to make do with the four that comes in the other STs. 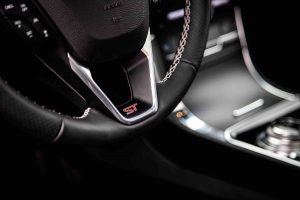 Which isn’t a consolation prize. Its 250 hp is very credible – it’s almost as much power as some of the optional turbo’d fours in models like the new Subaru Ascent, for instance. And its 275 ft.-lbs. of torque sufficient to deliver the low-and-mid-range pull of a V6, even if it can’t pull as much as a V6.

The fact that both of the Edge’s engines are paired with conventional (geared) automatics rather than gearless CVT automatics is a compensatory edge. It’s also a relic of five years ago, when the political-regulatory pressure was lower and CVT automatics were still found mostly in economy-minded vehicles. Because the CVT transmission is a type of transmission designed for maximum economy – at the expense of performance. 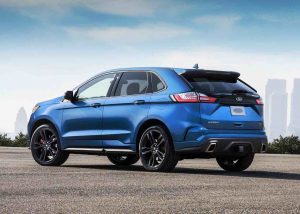 CVTs are very smooth – because they don’t swap gears. They vary ranges. This is also good for mileage. But CVT-equipped vehicles sometimes feel sluggish during initial acceleration from a standstill and they sometimes make more noise during acceleration, because they don’t upshift to a higher gear. Instead, they hold a lower range – at higher engine RPM.

If you prefer it the way things were five years ago, the Edge has an edge.

Another one being the simpler layout of its dash and controls. They’re not as “fancy” as the latest touch-screened everything but this is a virtue if you prefer driving to video-gaming. 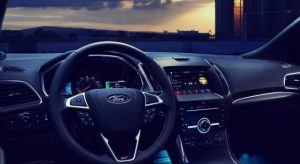 The “safety” systems are also less present, probably because Ford has added them in over the years rather than designed them in.

Also, the AC gets cold. Not just cool. It can bring the temperature inside the Edge to 60 degrees on a 100 degree day. Some newer-design cars have warmer AC systems. They cool you down; but they don’t bring back fond memories of the old Freon systems that could frost the vents. 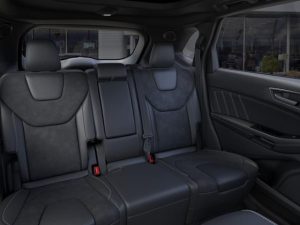 Another Edge is the size of this Ford.

About 188 inches long overall – so about a foot shorter overall than a seven passenger SUV like the Explorer and so noticeably easier to maneuver in close-quarters driving, such as backing up out of a parking spot at the supermarket.

You can use the Edge to carry a pushmower and a weed whacker with the rear liftgate closed. 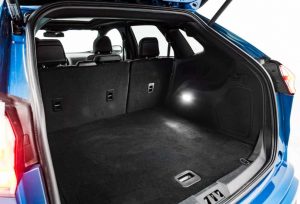 Ford offers powered/push-button folding-down of the  rear seats, too – but you have to return them to the upright position manually.

The doors are large, too.

Both pairs. Sometimes, the rear doors are noticeably smaller – just as there’s noticeably less room in the back seats. What Ford did here is make the Edge’s first and second rows first-class rows – as opposed to first class in the first row and coach in the back (and steerage in the third).

Ford also includes multiple 12V power points as well as USB power points. Believe it or not, 12V power points are becoming uncommon in newer-design vehicles, apparently because most accessories are powered-up via USB-style hookups. But, some accessories – like radar detectors – still get their juice the old-fashioned way and it’s handy that the Edge still provides a way to get it.

Especially the ST version, which ought to come standard with a radar detector. 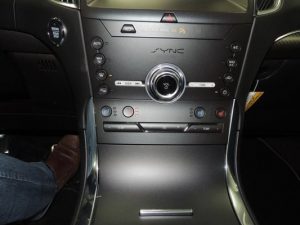 The Edge doesn’t come with a CD slot anymore. Instead, AppleCarPlay and Android Auto – so you can play your CDs without having to carry them around.

After you convert them from physical to digital media.

If you order the ST and decide to order the upgrade performance brake package, keep in mind that it includes performance pads – which take getting warm before they bite as hard as the standard pads.

But they bite better once hot – and don’t fade because they got hot. 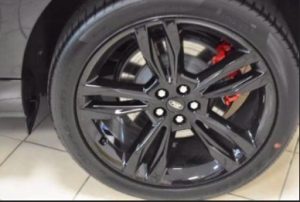 Finally: Ford may be updating the Edge next year. Which might be good . . . or not. Depending on the updates. One such update might be the retirement of the V6, for political reasons.

In which case, now might be a good time to shop for both room and power.

Rather than try to be all things to seven people, the Edge succeeds at being very good for five.