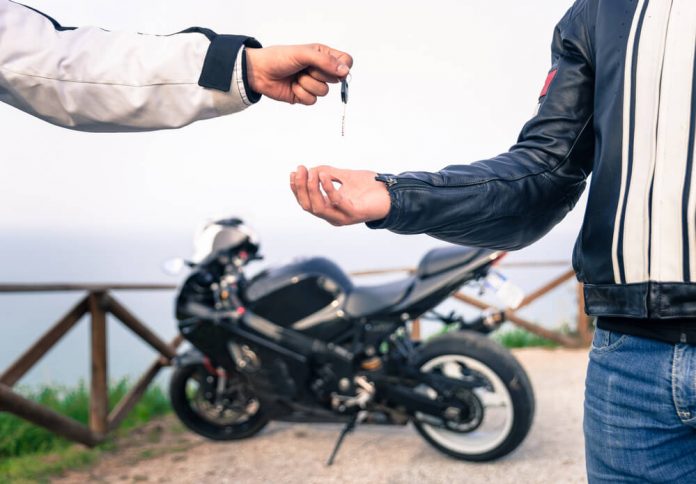 Bikes are not unlike shoes in that you want one that fits.

You want to be comfortable on it, able to easily hold the bike up with your feet and “walk” it around, as when maneuvering it into/out of your garage. You don’t want a bike that’s too heavy for you – or which is hard for you to deal with at low speeds, as when making U turns, backing up and so on. 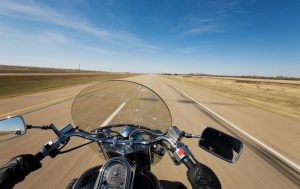 Almost any modern bike will be powerful enough as they are almost all have power-to-weight ratios much more favorable than most cars. But many bikes are arguably too powerful for a new rider – and not just sport bikes. There are cruiser and touring and adventure-touring bikes that are quite capable of throttle wheelies – and that’s for your next bike or after you’ve been riding your first one for a year (better three).

But you also don’t want a bike you’ll outgrow right away. 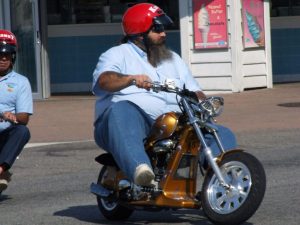 Which brings me to a few specific suggestions. The first is a dual-sport (on and off-road) bike in the 250-650 class, something like a Kawasaki KLR250 or KLR650 or its Honda/Suzuki equivalents. These bikes have a number of merits, among them a standard-sized frame that will fit most adult men comfortably. Street bikes with 250 cc engines (e.g., the Honda Rebel) tend to be too small for most adult men; they’re often used for new rider training courses (MSF) because they are very light and very easy to handle. But they are also very easy to outgrow – and not just physically. A standard-sized man will usually get tired of a little bike like the Rebel in short order. 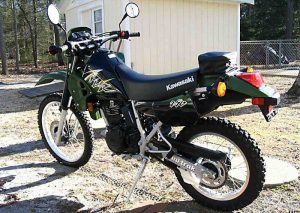 But a dual-sport bike like the KL250/650 is a bike you may never get tired of. They are huge fun because you can trail ride and ride on the road, as you like. The KLR250 is a little under-engined for long highway rides but it can be operated at highway speeds. The KLR 650 can be operated cross-country – and many owners do just that.

Kawasaki has been making the KLR series for generations. As in decades, without making major changes. These bikes are simple, durable and need very little in the way of elaborate maintenance and what they do need you can probably tackle on your own, if so inclined.

They still have carburetors, even. 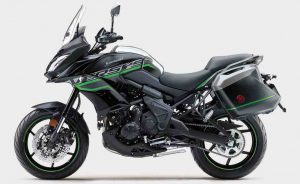 My next recommend is related to the above. The adventure-touring class. An example of the breed is the Kawasaki Versys, which is available in 650 and 1,000 engine sizes (the frame size is the same). These are more road-oriented but can also be ridden on grass/trails – hence adventure. This class of bike is surging in popularity because they are a return to what motorcycle riding was once all about… having fun. And without spending a fortune.

My third recommend is a bike that anyone who knows bikes has probably owned or at least ridden at some point and will probably agree is a great bike to own – and not just as a first bike, either. It is the Honda Nighthawk – which Honda made in several iterations but the most common and recent being the Nighthawk 750. It is a “standard” bike of the type that was once referred to as the Universal Japanese Motorcycle (UJM) back in the ’70s and ’80s – because every Japanese nameplate made one. They all descend in basic layout from the bikes that changed everything – the 1969 Honda CB750 and the Kawasaki Z1900. 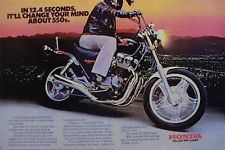 These two bikes had modern in-line/air-cooled four cylinder engines (SOHC for the CB750, DOHC for the Z1900) and set the standard emulated by everyone else.

The Nighthawk was another take on the same basic theme – and the 750 was made through the early 2000s (see here for some detailed info about the bike). I’ve owned 500 and 650 Nighthawks and have nothing but accolades to share about them. And they have the additional virtue of being common and cheap. Less than $5k will buy you an immaculate, low-miles one and $2,500 or so ought to cover a mechanically sound and decent-looking example. These bikes are also inexpensive to insure and can be fitted with hard bags if you plan to tour/need storage capacity.

Some – like the CB550SC I owned once – even have shaft drive, so no chain to clean or adjust. 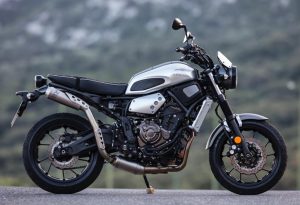 New bikes generally similar include the ’20 Yamaha XSR700 (about $8,400 new) and the Suzuki SV650 (about the same). If you like “retro,” you might have a look at the Kaw W800 – which looks like a ’73 Kaw but has all the modernities, including fuel-injection and disc brakes on both wheels.

The downside of the above bikes is they do have the modernities – including a computer just like a modern car and thus when the bike needs service other than the most basic, it will likely mean a trip to the dealer. But, these bikes are less apt to need anything more than basic maintenance for years to come and if you prefer to just ride, a bike like these might be just right for you.

You may be wondering why all my recommends have one thing in common . . . that being they’re all Japanese bikes. The reason for that is simply that the Japanese make the most reliable and affordable bikes. It’s the reason why Honda and Kaw and Suzuki and Yamaha practically killed off the British bike industry – and put Harley on life support. No offense to those bikes; they have their merits, too.

But for someone who wants to ride – and doesn’t want trouble – it is very hard to go wrong with anything made in Japan.