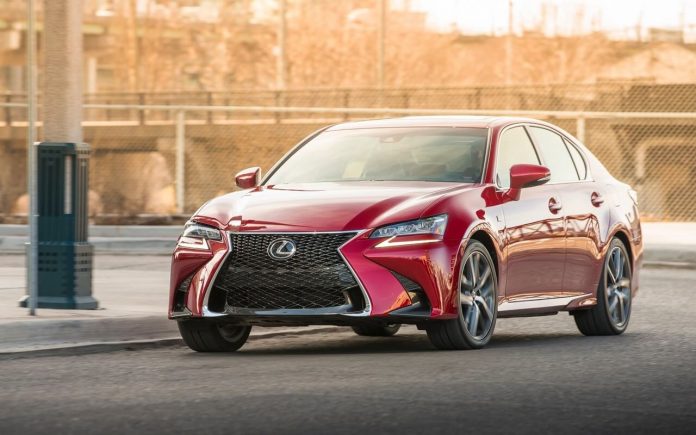 What killed the Lexus GS350?

After 27 years in production it looks like 2020 will be the final year for this mid-sized luxury-sport sedan, which was one of the first of its kind not made by BMW or Mercedes-Benz.

Lexus sold it for less than BMW and Benz charged for their mid-sized luxury-sport sedans, models like the E-Class and 5-Series. And gave you more.

As well as less, in the form of lower – and slower – depreciation.

A Lexus luxury-sport sedan was likely to be worth more after you paid it off than its BMW or Mercedes equivalent – and last longer without costing you more, too.

All of that’s still true today – which makes it a sad day because the GS is going away, for reasons that have little to do with its merits relative to its rivals but rather because luxury-sport sedans as a class just aren’t selling well anymore as the market shifts over to luxury-sport crossovers. 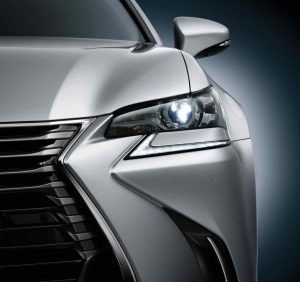 The GS350 is a mid-sized luxury-sport sedan available in rear drive and AWD configurations.

Unlike most of its rivals, this one still comes standard with a V6 rather than a turbocharged four – and it costs less than most of them do, too.

Prices start at $51,395 for the rear-drive version and – interestingly – $51,065 with AWD. Read that again. Lexus has priced the AWD version of the last-of-the-line GS slightly below the price of the RWD version. 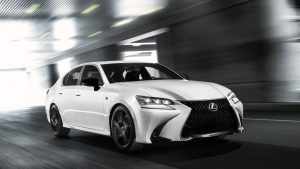 And both come with much smaller – and less powerful – 2.0 liter fours while the Lexus comes standard with a 3.5 liter V6.

For its swan song year, Lexus is offering a Black Line edition – available in either Caviar White or Ultra White on the outside, with unique black leather interiors, trimmed with Rioja Red stitching and carbon fiber accents. 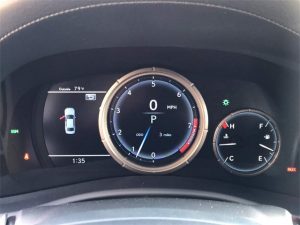 One of the best deals going for a car of this type.

One of the strongest standard engines in the class.

Toggle/mouse input for the Infotainment system isn’t as easy to use as buttons and knobs.

Every GS350 – including the F Sport – comes standard with a 3.5 liter V6 that makes 311 horsepower and 280 ft.-lbs. of torque. This engine is the same well-regarded engine used in several other Lexus – and Toyota – models and has earned a reputation for being exceptionally reliable and long-haul trouble-fee. 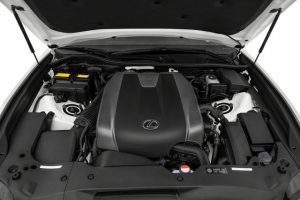 Now, the GS350 is pretty much the only car in its range that comes standard with one.

There is the Infiniti Q50 – which does come standard with a V6 that’s almost as large and nearly as strong (3.0 liters, 300 horsepower) but it’s a smaller, almost compact-sized car and so not really a direct cross-shop. And the Genesis G80 – which is about the same size but has a much smaller trunk and a tighter back seat. 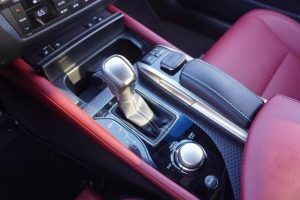 The ES350 is a front-drive car and doesn’t offer AWD. It leans toward the luxury side of the luxury-sport aisle, while the GS350 leans more toward the sport side. It’s not really a case of better or worse but different strokes for different folks.

The transmission you get depends on the layout you choose. 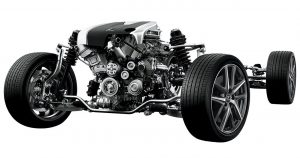 Interestingly, both have two overdrive ratios – 7th and 8th in the eight speed box and 5th and 6th in the six-speed. Not three for the eight speed (and two for the six). The eight-speed transmission has tighter gear spacing, first-through fifth, vs. first through third for the AWD’s six-speed transmission – including a really deep 4.596 first gear ratio vs. 3.520 in the six speed.

But the AWD GS gets a more aggressive 3.7:1 final drive ratio vs 2.937 for the rear-drive GS so both end up being about equally quick, achieving 60 MPH in 5.7 seconds (with RWD) and 5.8 (with AWD) a difference impossible to discern without a stopwatch.

There is a big difference on top, though.

The rear-drive GS is capable of 143 MPH while the AWD version is electronically limited to 130 MPH. 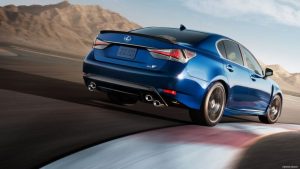 A turbo can make up for making an engine smaller – provided there’s enough boost to make up for the lost cylinders. But there are intangibles that a turbo can’t replace, including the sound made by a V6 as opposed to a four.

The GS still has its V6 because the GS hasn’t been redesigned lately. The current model dates back to 2013 and so was designed a couple of years before that – at a time when its designers never imagined they’d have to squeeze 35 MPG on average out of a car in this class. A V6 was expected – and so that’s what went under the hood of the GS.

Which brings up that intangible. What’s expected.

If you jumped into a time machine and went back 25 years and tried to sell luxury-sport prospects a $50k car with a four cylinder engine they’d laugh in your face. Who would pay $50k to drive a car with an engine the same size as his neighbor’s $20k economy car?

But it’s becoming hard not to pay to drive one, as that’s increasingly all that’s available – even for $50k.

Here, you get the pride of owning a V6 rather than a measly four – with a great deal more power than those measly fours, too. 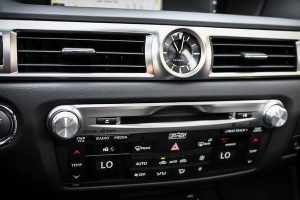 Beside which, the sound.

When you give it gas, you hear the baritone song of six, not the  prepubescent song of four. It is true the torque spread of the four is more generous but that misses the point. The GS’s V6 enjoys a spin to the right side of the tach and so will you.

You may also enjoy the absence of ASS – the automated stop/start “feature” almost every new car now comes standard with, including the GS’s rivals from Benz and BMW. The GS350’s V6 shuts off when you shut it off. As opposed to it shutting itself off at every red light and pause in traffic, as ASS-equipped cars do.

Still, it could be sportier. 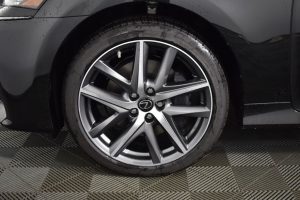 The ride and steering – even in Sport mode – lean toward the luxury side of the aisle, for a car of this type. The F Sport with its adaptive suspension and more aggressive 19-inch “summer” tires is much improved in this respect – and relative to the ES350, which is otherwise a contender in the curves, notwithstanding its FWD layout.

Especially the $52k F Sport, which has the rest.

Lexus kind-sorta does offer the rest – and more – in the GS F, which has a 5.0 liter, 467 horsepower V8 under its hood. This one delivers the goods – including zero to 60 in four seconds. But this kind of speed costs $85k – and that put it out of reach for practically all of us. 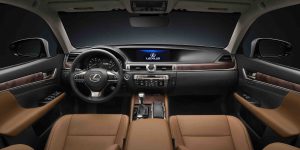 Aside from general trends in favor of crossovers, the other problem besetting luxury-sport sedans is their lack of one-car-does-it all practicality – the attribute which helps explain the trend in favor luxury-sport crossovers.

But the GS350 is exceptionally practical  . . . vs. other luxury-sport sedans. 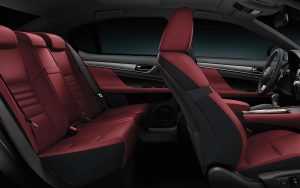 The problem for all luxury-sport sedans is how much more practical luxury-sport crossovers are. For example, the hugely popular Lexus RX350 (which comes standard with the same 3.5 liter V6) and is almost exactly the same overall size in terms of its footprint (192.5 inches long) has 18.4 cubic feet of space behind its back seats and 56.3 cubic feet with its back seats folded down.

That’s three times as much space for “stuff” as the GS350’s got and that plus the snow-fording advantage of being higher off the ground makes the RX more appealing to people who need a family car that’s also a luxurious and a sporty car.

Even if it technically isn’t a “car.”

The GS may not have as much cargo room – or ground clearance – as a crossover but it does have a very generous list of standard amenities going for it, including a 12-speaker premium audio system (with a CD player) and a larger-than-most 12.3 inch LCD display, a standard sunroof and leather seats. 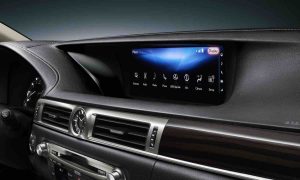 Available options include an even more premium 17-speaker Mark Levinson sound system and – F Sport models – a four-wheel steering system (DRS) to further uptick this car’s cornering capabilities. It should be mentioned here as well that the available AWD system is set up to  deliver a rear-biased 30/70 (front to rear)power split, to maintain the feel of a rear-drive car when the cornering upticks.

Most $50k cars have a smartphone-emulating interface to control secondary functions – in order to set them apart from $25k cars that have knobs and buttons to control them. Whether this is an improvement will depend on whether you like tapping and swiping to control things. 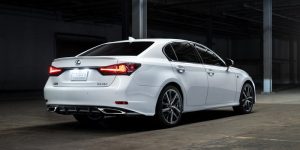 The Lexus system does have ergonomics in its favor.

There is a soft pad on the center console for your right hand to rest on, with a small forward-back/left-right toggle you can use to “mouse” your inputs to the LCD screen. The toggle has some drag built into it so there’s more feedback than the more common finger swipe/pinch/tap method used in other $50k cars – but it’s arguable that a simpler button or knob would serve the same function with less elaboration.

The GS goes away with 2020 which is only about six weeks from now. So if you want one under your tree, don’t wait on Santa.