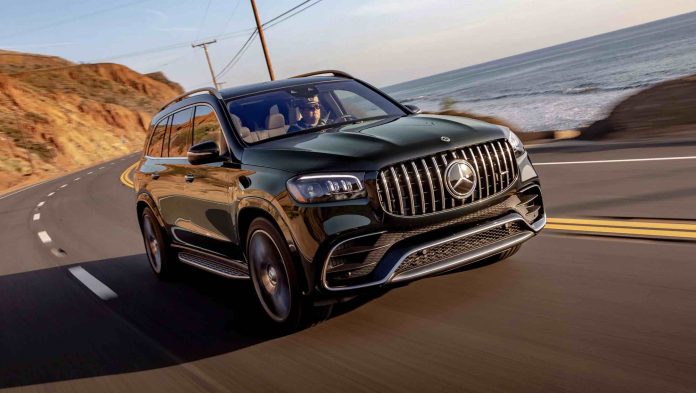 Lots of medium-large crossovers offer a third row. Almost all of them offer very little room in that row.

The Mercedes GLS is among the few its size – and length – that has the room you’d otherwise have to buy something bigger (and longer) to get.

It’s also got some other things way back there, including heaters for the third row.

And there’s something else, too.

Two of them, actually.

The GLS is a three-row ultra-luxury crossover SUV that fits in places a full-size sedan like the Mercedes S-Class would find tight – while fitting several more people inside.

It has nearly 35 inches of legroom in its third row – which is about 4 inches more than is typical in the third row of most crossovers its size (and length) that offer a third row.

And there are only a handful of crossovers in the same class as the GLS that can also compete with it as far as space. The BMW X7 is probably the closest thing. Like the big Benz, it offers a roomy third row and also comes standard with a turbocharged in-line six cylinder engine, teamed up with a mild-hybrid set-up that cycles the gas engine off and on as you drive to decrease the amount of gas you burn as you drive.

But the Benz offers something else – a twin-turbo V8. In two versions. 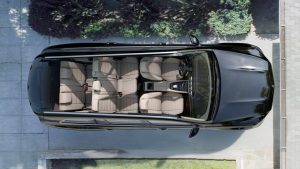 It’s hard to find anything that can carry seven people that fast.

If you have $132,100 burning a hole in your pocket – and want to burn some rubber – there’s the GLS63 AMG, defined by the 603 horsepower twin-turbo V8 under its hood, plus upgraded brakes and a more aggressively tuned suspension to match. 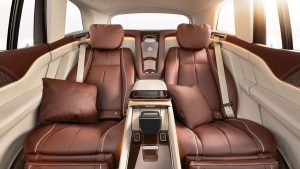 This Benz got a complete makeover last year – probably to put some more distance between it and its chief rival, the BMW X7 – which was all-new in ’19.

The main change for 2021 is the addition of the 603 horsepower GLS 63 AMG to the roster – probably to put the 523 horsepower X7 M50 a bit farther in the rearview mirror.

On deck – if that’s not enough – is a $200k Maybach version, with reclining and massaging rear seats.

An S-Class for seven, really.

Excellent E-Active Body Control system is only available with the much-more-spendy GLS 580.

Like the X7 (and the also similar but slightly smaller Lincoln Aviator) there’s no Low range gearing; if you need to take seven off-road you’ll need an SUV with truck-type underpinnings and 4WD, such as the Cadillac Escalade, Range Rover Sport or the Lincoln Navigator.

Even though it can cycle its gas engine off, gas mileage isn’t that great: 20 city, 24 highway. 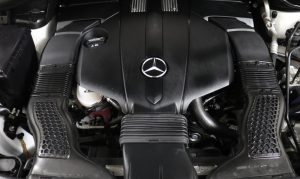 Like several other Mercedes models – including the E-Class sedan I recently reviewed – the GLS comes standard with a 3.0 liter straight six augmented by a generator/starter system (and 48 volt electrics) that’s used to regularly cycle the six off and on, to boost gas mileage and lower gas (carbon dioxide) emissions.

The latter is the bigger deal – for Mercedes and other manufacturers trying to keep gas-burning engines under the hood at all. Not because buyers don’t want them but because government regulations are getting to the point of almost outlawing them. 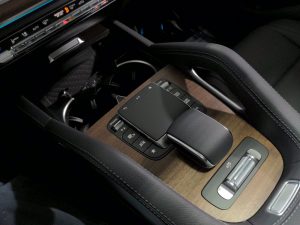 You gas it up just as you always have in the past. The engine recharges the battery pack, that spins the flywhweel starter, that cyles the gas engine back on whenever you need to go. It is an elegant solution to a difficult problem – that of complying with the government while delivering what buyers expect.

Which includes not having to stop for an hour – or several – every 200 miles or less to recharge.

The other boon is not noticing the gas engine cycling off – and back on. As is very noticeable in cars without the high-powered re-start system the Benz has and that have instead what is marketed as auto-stop/start “technology.” 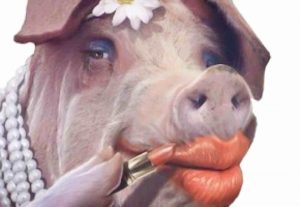 Which is lipsticking the proverbial pig.

Auto stop/start is a crude way to make the government happy – i.e., to comply with government regulations regarding the burning (and emitting) of gas. The gas engine is shut off, automatically, pretty much every time the vehicle stops moving – and then automatically restarts when it’s time to get going again. But the system uses the same basic starter motor used to start IC engines for the past 120 years – paired with the same basic 12 volt electrical system used in cars for the past 60 years.

Neither system was designed to repeatedly re-start the engine – nor do it without any feel or sound of starting.

Which makes the driver – and the government – happy. 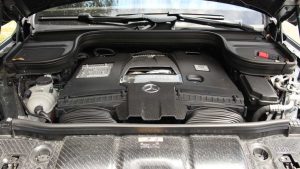 EPA says 20 city, 24 highway – which isn’t great but then again, it’s pretty good for a plus-sized, seven passenger crossover with 362 horsepower under its hood that can get to 60 in 5.8 seconds. We take that kind of speed almost for granted.

We ought to revel in it.

If you need more speed, the V8-powered GLS580 delivers it – courtesy of the 483 horsepower twin-turbo’d V8 under its hood. It gets to 60 in just over 5 seconds. And if that’s not enough speed, the GLS 63 AMG’s 603 horsepower V8 gets you there in 3.6 seconds, which is truly ludicrous speed – without the ludicrous wait. 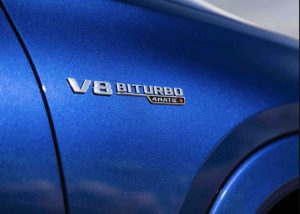 The main thing the GLS offers is executive-class travel for everyone. Not just the driver and passenger – with maybe business class for the second-row passengers. And steerage for the third row unfortunates.

That’s rare, even among other high-end crossovers like the BMW X7, which is slightly smaller and for that reason, less roomy.

The other thing the Benz offers that larger SUVs with viable third rows do not is a nearly flat floor, which allows for a center aisle rather than a center hump, which most SUVs have because most are built on truck-type chassis, with a separate steel frame and a body bolted on top of it. The hump running down the centerline makes space for the driveshaft – at the expense of space for the passengers.

And not just for their legs.

It’s harder to maneuver – to get into and across the seats – with that hump in the way. In the Benz, it’s not.

Once you’re rolling, you’ll appreciate the handling – which is remarkably adroit given the size of the GLS. It is like driving an S-Class, just higher up – and with more behind you.

The only deficit here is that even better handling is available – but only if you spring for the more expensive GLS 580, which can be ordered with Mercedes’ very trick E-Active Body Control system, which leans the body back toward the inside of the curve to counteract the tendency of the body to roll toward the outside of the curve during high-speed cornering.

It also scans thew road ahead for irregularities – and potholes – and pre-adjusts the suspension calibrations in anticipation of them, rather than reacting to them, after you’ve already driven over them. 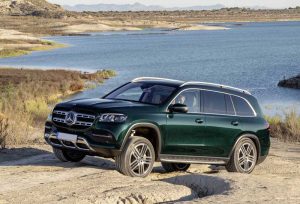 The intangible emotional appeal of that inline six.

These engines have a different character than any motor. Or any V6. They are smooth and revvy and make you feel  . . . happy. That you’ve achieved a degree of success in life and for that reason can treat yourself to something like this.

Or – even more so – either of the two available V8s.

Especially the version in the GLS 63 AMG. If being able to keep up with a Corvette with seven people on board doesn’t make you grin like the Joker, there’s something awry with your sense of humor. 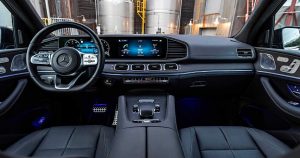 Benz offers both configurations, with captain’s chairs for the six-seat layout. Either way, they all fold flat – at once – at the touch of a single button. Or individually, as you prefer. An available Executive Package includes a fold-out/down center console, tablet to control the infotainment/climate and heaters for the all-the-way-in-the-back seaters. That’s a uniquely Benz luxury amenity, certain to be emulated but for the moment, exclusive.

Similar – to the S-Class – is the dash layout of the GLS, which is an all-flat-panel LCD touchscreen display that can also be configured by voice. Just say – hey, Mercedes.  Then tell it what you’d like it to do, such as change the audio selection or turn on the massaging seats. 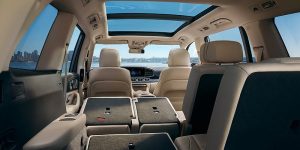 Something else the GLS has that the S-Class doesn’t is a pair of heated grab handles on either side of the center console, with heated metal trim surrounds that radiate heat to your sides without having to grab them.

Such things spoil a guy.

Mercedes also has arguably the best LED mood lighting. The entire cabin is bathed in an ethereal aura of light, your pick of spectrum. If they had this in the ’60s, they’d have called it trippy.

Also retro – but smoothly blended with the very modern look – are pewter-plated toggle switches for a number of everyday/important functions, which you can use if you prefer rather than hey, Mercedes – or tap/swiping through the screen or via the mouse trackpad in between the grab handles. 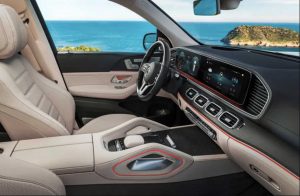 There are nine USB power points.

The enormous panorama roof is – as a friend put it – surf worthy.

The GLS is also an interesting midway between the typical crossover – which is typically based on a light-duty and usually FWD-based car layout – and the typical SUV, which (per above) is based on a burly truck layout, with four wheel (rather than all-wheel) drive and 4WD low range gearing.

It’s more rugged and capable than most crossovers, which aren’t designed for more than light-duty towing, especially. But it’s not as capable of going off-road as an SUV, which has the gear for that kind of duty.

What you have is a ride that doesn’t feel flimsy – and handles athletically – that can pull a pretty serious load – without feeling clunky in the curves and without the hump on the inside. 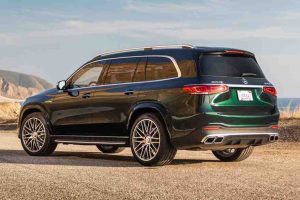 With everything you can get – and expect – in an S-Class.

And room for seven people or a lot of stuff (84.7 cubic feet with the second and third rows folded, almost enough to store an S-Class).

Luxury for all aboard is what this Benz is all about – and delivers.