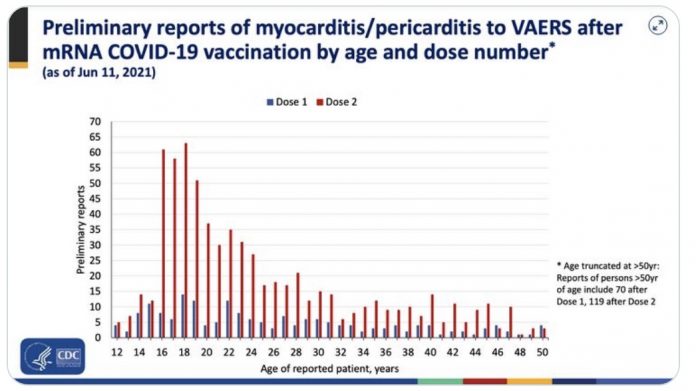 Sluggishly, “the science” – as expostulated by the Vatican of Sickness, the Centers for Disease Control – is admitting that the “safe and effective” whatever’s-in-those-needles it has been very aggressively pushing for everyone to experiment with, especially children and young adults, actually isn’t.

But without saying it’s not.

They are admitting it – post facto, because the facts are becoming too-well-known not to admit it; kind of like admitting that the sun generally rises most mornings.

Whatever’s-in-those-needles “does appear  . . . to be a new trigger for myocarditis,” says a CDC Advisory Panel on Immunization Practices. Myocarditis is heart inflammation. Pericarditis, which is the related inflammation of the membrane surrounding the heart, is another sickness almost no one in the previously healthy 25-and-under age group is generally afflicted with – until after having received a “safe and effective” vaccination for a sickness that presents almost no chance of giving them the sniffles. 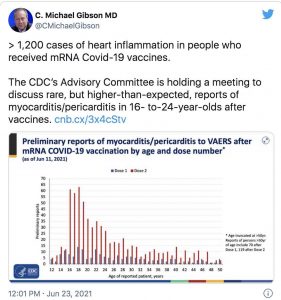 Over just the past several months, at least 1,200 young people developed one or both of these potentially – and in several cases, actually – fatal sicknesses.

It has been reported that what is styled the “post secondary dose risk” of myocarditis/pericarditis post Holy Anointing for people under the age of 25 is 200 times the normal rate of the natural rate of occurrence for these illnesses in people 25 and under.

More about all of this here.

But the vaccines are still “safe and effective” – officially.

Linguistically, it is an imbecility. If a medicine can make you extremely sick, even kill you then by definition it is not “safe.” Was the Pinto a “safe” car? Ford made millions of them; a few dozen people may have died due to the design and location of the car’s fuel tank and fuel filler neck. It was hounded off the road – and Ford into court – over the statistically trivial chances that a given Pinto might erupt in flames if struck from behind in just the right way.

Hundreds of millions of healthy Americans have been forced to wear a degrading and medically useless rag over their faces, for most of the past year, on the basis of specious assertions about “asymptomatic” transmission – which not one person has been proved to have been sickened by.

But a “vaccine” that is maiming and even killing perfectly healthy teenagers and young adults is and which is associated with closing in on 6,000 reported deaths so far this year coincident to being injected with it is . . . “safe and effective.”

It is astounding, the effrontery of it. A blatant “case” of Orwell’s Doublethink. And a demonstration in practice of leftist radical Saul Alinsky’s “rules” – the paramount one being to never concede error while ferociously attacking any who dares to point it out. Usually, on account of their “racism.”

But in this case, “the science” will do. “The science” always supports medical tyranny, even when “the science” has to be adjusted – without admitting it needed to be. For example, Pope Fauci XVII’s contradictory bulls regarding the wearing (and not) of Holy Rags.

And then maybe two at once. 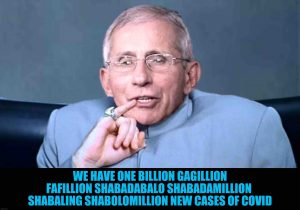 The universal Anointing of young people and children cannot be gainsaid, either – though they need it as much as an alligator needs  a sweater and many parents are beginning to have their doubts – and beginning to ask why this incredibly aggressive concerted effort to shoot whatever’s-in-those-needles in the bodies of perfectly healthy kids.

Maybe it makes sense for elderly/morbidly obese/already-seriously-sick people who sand a greater than 1 percent chance of dying if they get the ‘Rona to assume the risk of an Anointing. But is there any valid medical reason to be experimenting with the health of people whose risk of dying from the ‘Rona is on the order of 0.0-something percent?

In normal times, most people would say – or agree with those who said – wait. Whatever’s-in-those-needles is not “safe and affective.” It is harming – it can kill – perfectly healthy kids. There is no legitimate reason to continue putting them at risk on the putative basis of practically no risk at all – from the sickness that whatever’s-in-those-needles is supposed to prevent them from getting. 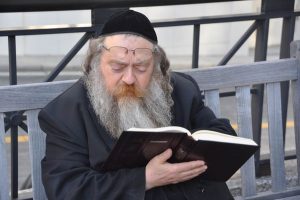 Which we know it doesn’t – in adults.

The Anointed can still get the ‘Rona. Or a “variant” of it. So what, pray, is the point of the Anointing? Apparently, it is the Anointing itself. Like the wearing of the Holy Rag, it is not the efficacy that is relevant but the universality of acceptance – of the doing.

The difference is that crossing oneself and wearing a Yarmulke will not give you – or your kids – myocarditis or pericarditis. But the enforced wearing of the Holy Rag has created the predicate for this latest – most dangerous – religious ritual, which involves something you can’t take off once you leave the store.

And which may quite possibly put you or someone you love in the ground.