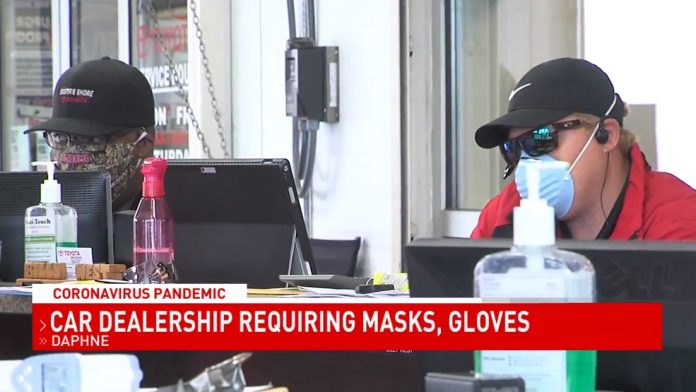 America has been turned into a kind of inescapable hospital ward by very sick people, using the cudgel of commerce to compel the healthy – the sane – to play along. As for example by requiring healthy people to play-pretend that they are sick – or spreading sickness – and so they must wear a “mask” to enter  a store.

This form of Sickness Kabuki is returning  – not because most people want to “practice” it but rather because car dealerships, being the retail outlets of large corporations, are being pressured to impose it by the large corporations to which they are beholden. The same corporations that have reinstated “mask” requirements on the assembly line floor are insisting on the same on the showroom floor. 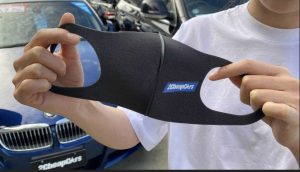 This includes General Motors, Ford and the Stellantis combine that owns Chrysler-Dodge-Jeep, who earlier this month decreed that everyone who works for them will “practice” Sickness Kabuki by wearing a “mask,” including those who’ve took the experimental “vaccine” so as to avoid having to wear the soul-effacing things.

These poor people face an economic Sophie’s Choice: Assert their sanity and lose their paycheck. Or play along with the sick Kabuki, in order to continue being paid. The pressure coming from these big corporations is responsible for most of the spread of Sickness Kabuki, which would probably never have taken hold to the degree it did if people were not threatened with loss of livelihood, at the cost of their self-respect.

A dangerously large percentage of Americans work for these corporations, which for that reason wield a dangerous degree of control over America. A literal handful of corporate executives can cause tens of millions of people to dance pitifully from the economic strings they hold. And these corporations are “interlocking” – meaning they do business among themselves and share common interests, often at odds with our individual interests, as formerly independent human beings.

One of these interests of theirs is the reinstating of the company town model, this time under the guise of a hospital ward. Sickness – the endless possibility thereof – will serve as the basis for total micromanagement.

“Masks” are just a taste of what’s to come.

A company town – for those unfamiliar – was a place where everything in the town revolved around and was controlled by the company, including the town itself. Which was typically built upon land owned by the company, which then built shacks upon it for the people who worked for it to live in – and pay rent to the company to live in, using company money. The workers bought their necessaries – food and so on – at company stores, also owned by guess-who. 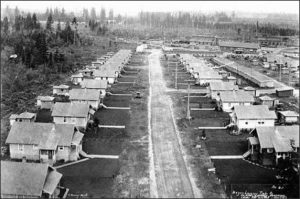 In effect, the company owned the workers themselves – as they owned nothing. Many of them weren’t very happy about it. But unlike the New Normal being elaborated by today’s corporations – who are on the verge of owning everything, almost everywhere – the people who worked in those Mark I company towns could leave and take their labor with them. The were free to try their luck in another town, one not owned by a company.

This ended the power of the Mark I company town model.

The Mark II model being erected all around us, right now, is founded on the concept of making everywhere a company town, disguised as a kind of universal hospital ward – so as to make sure no one can leave – or disobey the company’s orders. The idea is – as they themselves have put it, for us to own nothing – and for them to own everything.

And for us to be happy about it.

Of course, they didn’t say the middle part. But it is implicit in the first part. Once we own nothing, they will in fact own everything – including us. They will then be able to force us to do anything they like, including much more than wear a “mask.” That is merely the first, rough assertion of what they have in mind for us. Proof of Jab being next.

But far from the last.

There is hope, however. Because they cannot force us to buy from them – at least not yet. This reverses the power dynamic on which their evil plans depend, in our favor. It is the means by which we can smash their company town Mark II model to a thousand pieces, if only we exert our power to do so.

We can fire them – by not dealing with them.

We have what they want – our dollars, the same thing that they use as leverage against those who work for them. If workers refuse to play Kabuki, their dollars are withheld – by firing the worker.

And so the worker complies. He self-enserfs, for the sake of a miserable dollar.

But we can refuse to become serfs.

By withholding our dollars. We can refuse to buy a new car from any dealership that insists upon Kabuki performances as a condition of sale. We can walk onto the lot – and into the store – practicing normalcy, ready to spend a substantial sum of money – upon which the store and its employees and the corporation they work for, ultimately, depend  for their livelihoods – provided we are treated like customers rather than patients within a sickness ward.

If not, we walk, taking our dollars with us. 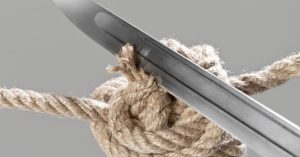 A much deeper cut into the ropes that seek to bind us can be made by finding non-corporate jobs at independent small/family-owned businesses – or go into business for ourselves.

Unless you want to live in a company town/hospital ward you cannot move away from.