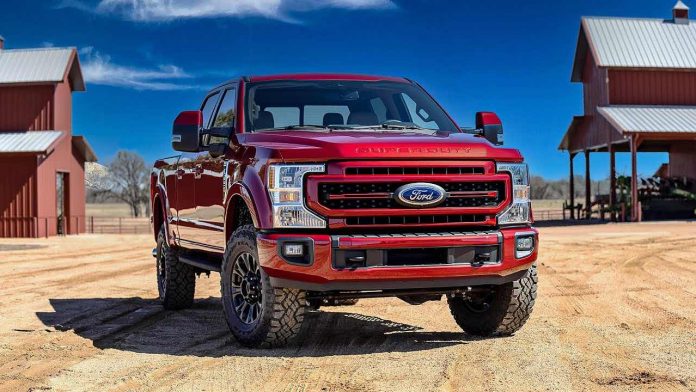 Call it the Battle of the Super Duties!

The F-250 is Ford’s three-quarter-ton (2500 series) pick-up truck, one notch up in capability from the half-ton (1500 series) F-150. The two look similar – because the current half-ton F-truck emulates the Super Duty appearance of the F250, including the tall bed walls and such that used to be specific – and exclusive to – the latter.

But looks only pull so much.

There is also something else to consider.

Unlike the F-150, the F-250 is available with your pick of all three of its available engines – which are all V8 engines – with any trim configuration, including the base XL trim. The F-150’s strongest engine is a V6 (with two turbos) that isn’t available in the lower-priced XL and XLT trims. 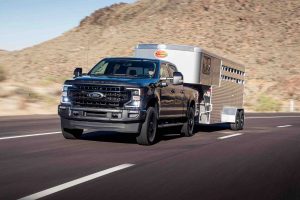 Two other V8s are available, optionally.

The second is physically smaller – but also much bigger. 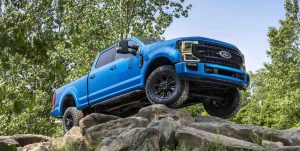 This one being the 6.7 liter Powerstroke turbodiesel that makes more than twice the torque of the 7.3 liter gas V8. 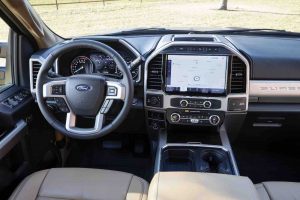 A 12 inch LCD touchscreen is available with Lariat, King Ranch and Platinum trims.

Even the standard engine is still a V8.

About the same length and width as a same-configuration half-ton F-150 but much more capable.

Like the F-150, the F-250 has an aluminum body that’s lighter than steel but easier to dent – and harder to fix.

No manual transmission available with any of the V8s.

Both the F-150 and F-250’s ride height and bedwalls are so high it’s not easy to reach into the bed – even for a man well over six feet tall. 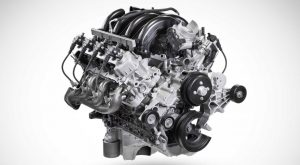 One of the chief draws of current 2500 series trucks like the F-250 is that these are the last trucks on the market that still come standard with V8 engines.

Some of the latest 1500 series trucks – like the just-redesigned Toyota Tundra – no longer offer V8s at all because of the ever-increasing pressure of government regulations regarding gas mileage – and greenhouse gas “emissions.”

But many truck buyers still want – still need – a V8. 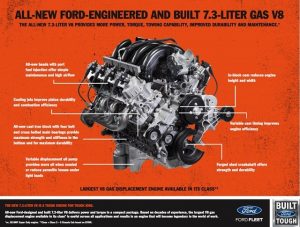 This V8 has dual overhead cams – but no turbos. It’s paired with a six speed automatic with just two overdrive ratios. It is becoming hard to find automatics with fewer than eight speeds and less than three or more overdrive gears – once again because of the pressure being applied by the federal regulatory apparat. The extra overdrives helping to squeeze out a couple of MPGs – the cost of doing so paid by the buyer. 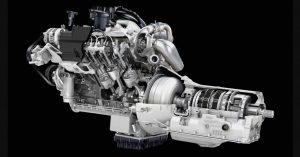 This engine is a pushrod engine – no overhead cams. Not direct-injected. It is a simpler engine, with fewer parts that’s a lot like the big block V8s that used to be commonplace under the hoods of big trucks. The max you can pull with this engine – which is paired with a ten speed automatic transmission – is about the same as you can pull with the 6.2 engine – 15,000 pounds conventionally; 19,500 with gooseneck – but with almost 50 more horses under your right foot.

For only just over $2k extra.

There’s one more engine to consider. If you can afford to. It’s the F-250’s strongest engine – though not its largest engine. 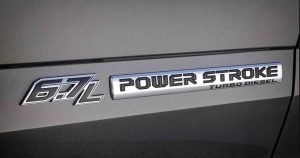 This engine also features an exhaust brake and has the ability to burn B20 diesel (emissions regs that apply to “light duty” trucks don’t yet apply as fiercely to heavy-duty trucks). So equipped, you can also drive some 600 miles on a full tank (34 gallons) which is comparable to how far you can drive a Prius hybrid – while towing several of them.

None of the F-250’s engines are available with a manual transmission – which used to be as de rigueur  in big trucks as big V8s. The reason they’re no longer available is the same reason V8s are becoming unavailable in half-ton trucks (which are also all automatic-only):

It is harder to fine-tune an engine for highest mileage and lowest “emissions” when the driver is in control of the shifting. Automatics can be programmed to get the most – and least – out of an engine and that’s why manuals have all-but-disappeared. 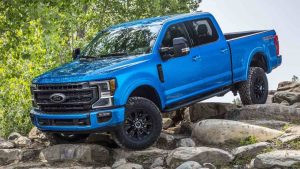 If you test drive an F-250 with the Powerstroke diesel V8 back to back with one powered by the 7.3 V8 you will immediately notice a number of differences.

It’s also quicker – without feeling it.

The bigger V8 feels like it’s pulling harder – even though it can’t pull as much. Or get you there as quickly. 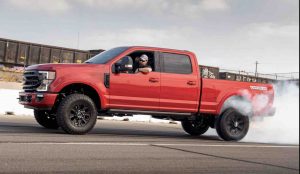 This is a beautiful – and quiet – thing.

The diesel endows the F-250 with explosive acceleration – just over 7 seconds to 60 being pretty impressively explosive for anything weighing almost 7,000 pounds without a driver behind the wheel – without afterburners. It simply bullies its way forward – and down the road – like a 320 pound linebacker sacking a quarterback.

An F-250 with the 7.3 monster motor is close behind – but makes more of an issue of it. More revs and – interestingly – more noise. The diesel is remarkably quiet. The gas engine – having to rev – is louder under full throttle.

EPA does not publish city/highway numbers for heavy-duty trucks like the F-250 but I can tell you – having driven both an F-250 with the 7.3 gas engine and an F-250 with the 6.7 diesel engine – that the latter goes much farther on a full tank, around 600 miles on 34 gallons which – rough math – works out to circa 17 MPG.

The gas V8’s mileage being closer to 10. 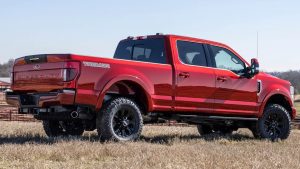 No matter which big V8 you end up with, you will end up with a big truck. More precisely, a tall truck.

An F-250 regular cab is only marginally longer (231.8 inches) than an F-150 regular cab (227.7 inches) and both are just as wide (105.9 inches, with the oversized extending side mirrors) which means they both need every inch of road, on either side. Smacking mirrors with another big truck coming at you the other way is more likely when you’re this wide – and many roads aren’t much wider. 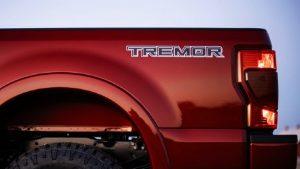 The tested Tremor model seems even bigger – because it is even taller. Because it stands on 35 inch knobbies and has a factory lift kit that ought to include an oxygen feed. On the one hand, this thing has so much clearance (and capability) it could probably crawl over Mount Rushmore. On the other hand, it is so big it is constrained by the amount of room available off-road, which is often not much. In terms of tenacity, this thing is the peer of Wrangler Rubicons (and new Broncos). But its bigness imposes limits.

So also its height. 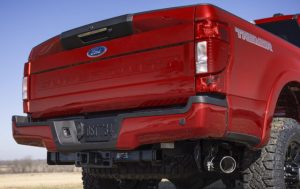 I’m a big guy. I’m a taller guy than most guys. But even a six-foot-three-inch-tall guy like me can’t touch the Tremor’s bed floor without standing on a step ladder. This means needing to use the step ladder that’s built into the tailgate. But even though this helps you get in, it remains a little difficult to get stuff out – because of how far that drop is.

The F-250, of course, is a Super Duty truck and such trucks have traditionally been higher up than other trucks. But then the Super Duty look caught on – and now even light duty trucks like the F-150 emulate the high-tall themes that look rugged but make loading and unloading more of a challenge. 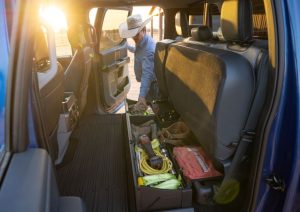 You can seat five big men comfortably in this big truck – two up front, three across in back. It’d be nice if you could seat six – three up front – which would be possible if the truck offered a bench seat rather than buckets separated by a console. Or a console you could flip back that turned into a jumpseat. This would also allow your significant other to snuggle up closer.

All that’s missing then being three on the tree!

While the F-250 is available with a large (12 inch) touchscreen similar to the one available in the F-150, it is not obligatory. Even in the Tremor. Which – for a ’22 model year truck – is still happily truck-like. It has straightforward manual/hand controls for most major functions – including the four-wheel-drive settings – as well as an analog gauge cluster. You can even still roll down the windows manually, if you prefer. But it is also a luxurious truck, which can be outfitted with a Bang & Olufsen ultra-premium audio rig and rides like a jacked-up Cadillac.

My ’02 Nissan rides like a truck – even though it’s not even half the truck this thing is.

The one worry is the Ford’s aluminum body – including the bed. Aluminum has many merits, including light weight and better corrosion resistance relative to steel. But it also has some negatives, especially in a truck context.

Aluminum is easier to bend – and harder to fix. Trucks tend to get bent, in the course of work. A steel-bodied truck is more dent resistant and can often be bent back into shape – kinda-sorta – using a come along and rubber hammers. Damaged aluminum often requires the services of an expert and that can cost more than a come-along and rubber hammers.