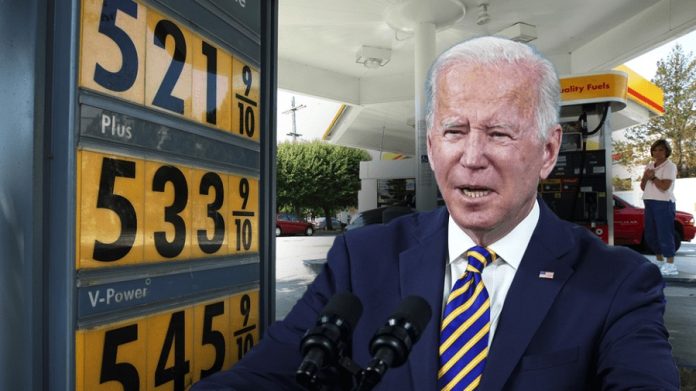 It’s ironic that the Thing responsible for causing the price of gas to double (on its way to tripling) at the same the value of the money we’re forced to use to pay for it has declined by about 15 percent has decided there’ll be 15 percent less gas in what was – once – 100 percent gas.

It – the Thing – has “authorized” via a “waiver” – another 5 percent reduction in the quantity of gas you’re allowed to buy, by increasing the quantity of ethanol alcohol in each gallon of what is no longer gas to 15 percent.

This is what’s styled “E15” – which is set to become the new default standard, replacing “E10,” the styling for what was 90 percent gas adulterated with 10 percent ethanol alcohol.

It – the Thing – says this is being done “As part of (his) commitment to providing Americans relief from market supply issues created by Putin’s unprovoked war in Ukraine.”

A number of interesting things about this transition.

The first being that 15 percent alcohol means another substantial reduction in the energy density – in BTU terms – of the resultant brew. This means the number of miles your car will travel down the road on a gallon of E15 will be reduced and that, in turn, means you will be buying more E15, sooner – using the money that’s had its buying power reduced by 15 percent, courtesy of the same Thing.

The Thing says “This action will increase fuel supply and provide consumers more choices at the pump.” Interesting, given “consumers” – one imagines hogs at the trough – will have less choice and pay more for it, by dint of being able to drive less far, using it.

It’s also ironic – superficially  – when you stop to reflect that the Thing often vouchsafes the importance of energy conservation and “efficiency,” most notably fuel efficiency. It was the Thing, after all, that summarily decreed a mighty increase in the minimum number of miles all new cars must go on a gallon of gas to nearly 50 miles-per-gallon by 2026. 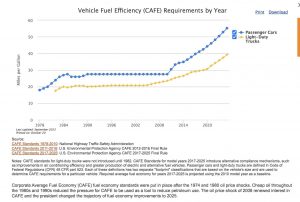 But his latest decree assures they will go considerably less far – on a gallon of E15. If the Thing were truly interested in maximizing how far cars can go on a gallon of gas, he’d be decreeing that ethanol-alcohol be removed from gas rather than added to it.

That he doesn’t says a lot about intent.

Ethanol is also inefficient in that it takes more energy input to make the stuff than it takes to refine gasoline. It is why a half gallon of 77.5 percent Everclear grain alcohol at the liquor store costs substantially more than a gallon of much lower proof E15. It makes economic sense to make grain alcohol for drinking – because a half gallon of it goes a long way in a human, or even several of them.

It doesn’t go nearly as far in an engine. 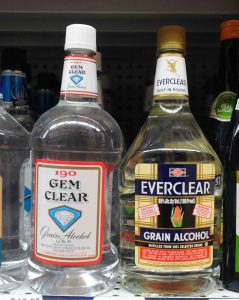 Some race car engines are set up to burn even more alcohol than is being introduced into the fuel supply for street-driven cars. But race cars don’t have to meet gas mileage mandatory minimums and racing is a cost-no-object business.

Alcohol in gas also does something else – to street car engines not built to run on more than 10 percent alcohol (E10).

Which is the vast majority of them.

It corrodes them, from the inside out. More accurately, the water that alcohol attracts accelerates the rusting out of steel fuel tanks and lines. It is particularly tough on carbureted engines, none of which were designed to burn “gas” with this much alcohol in it. This encompasses not only older car engines, made when gas was still 100 percent gas. It also encompasses most small engines made right up to now. Lawn mower engines. Snow blower engines. Chain saw engines. Most of these have a bright yellow warning label affixed to them – or in their owner’s manuals – warning the user to not use gas that has more than 10 percent alcohol (E10). 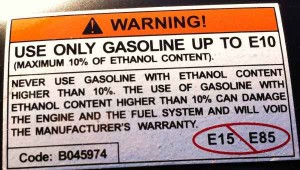 Use of E15 will at minimum void the warranty, if it’s still in effect. And if it’s not, it’s still on you to deal with whatever damage ends up being caused by the use of higher-than-recommended alcohol-content fuel in your outdoor power equipment.

Of course, older cars  are no longer covered by their new car warranties. It will therefore fall upon you to cover the damage done by the “gas” the Thing is trying to force you to put in the tank. It may not be a problem for newer older cars – the ones made from circa the early-mid 2000s to now, many of which were designed to run E10 and for that reason have plastic fuel tanks and fuel system parts designed to handle alcohol-laced fuel. Another 5 percent in the tank, courtesy of the Thing, probably won’t stop these cars.

But it’s incontestably true they will have to stop sooner. 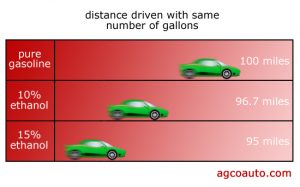 For more ethanol-laced “gas.” Which their owners will have to pay for with money that buys 15 percent less of it. And everything else, too.

Including the food that now costs 15 percent more even before the Thing “authorized” the further adulteration of the fuel supply. The cost of food is likely to go up even more than 15 percent – precisely because it will now take more “gas” to get to the store, to buy it. And then drive the food back home. Also because more food – for animals – is being  used to make ethanol.

But only we are trapped within it. 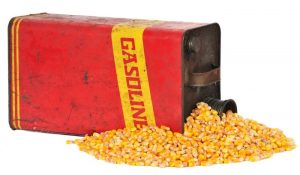 The Thing doesn’t need to sweat the cost of gas – however much adulterated – because we’re paying for it. Nor of food – for just the same reason. Or for that matter, the devaluation of our money – which does not concern him.

It probably partially explains why the Thing – and the lesser Things that are behind him – are so seemingly indifferent to the effects of their “authorizations”, “waivers” and “mandates” on us.

But there are other explanations, too.