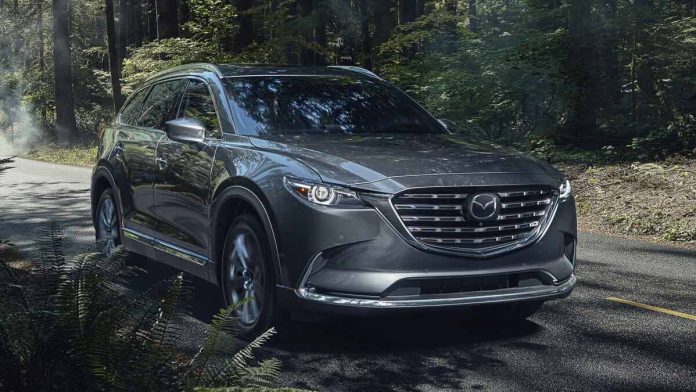 It’s hard to make a crossover different from all the other crossovers  . . . without making it something other than just another crossover.

It’s akin to trying to make a family-friendly Corvette.

But Mazda does a a better-than-most job of it with the CX-9, its largest, most family-friendly crossover. It is just slightly less practical than some of its rivals – having just a bit less room for cargo than most of them have – but it works hard to make up for that by being as fun to drive as a rig like this can be without becoming something that isn’t well-suited to being a family-friendly rig.

And it has some other strong points as well, including a lower starting price – with all-wheel-drive standard – than some of its main rivals charge for the front-drive versions of their big crossovers. 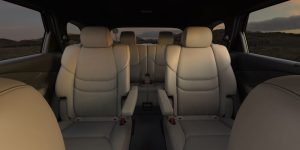 The CX-9 is Mazda’s largest crossover. It seats up to seven passengers (with the option to seat six) in three rows of seats, which can be either bench (second row) seats or captain’s chairs, depending upon how many you’d like to come along for the ride.

All trims come standard with AWD and a 2.5 liter turbocharged four cylinder engine paired with a six speed automatic transmission.

Prices start at $35,630 for the Sport trim and run to $47,650 for the top-of-the-line Signature, which comes standard with quilted leather seats and real wood inserts.

Primary cross-shops include other full-size crossovers like the Honda Pilot, VW Atlas and the Kia Telluride/Hyundai Palisade twins. 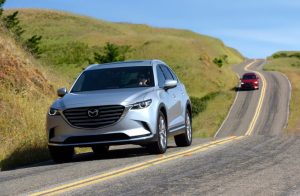 AWD – previously optional – is now standard. Also standard is a slightly higher base price than last year’s FWD CX-9, which stickered for $34,160 to start. But this can also be viewed as a price cut in that last year’s CX-9 with the then-optional AWD stickered for $36,060 – or $430 more than this year’s AWD-equipped CX-9.

Costs several thousand less than rival Honda Pilot with FWD – which costs even more with its optional AWD system.

Agile and snappy – for a full-size crossover.

Six (rather than eight, nine or ten) speed automatic transmission is likely to be long-term durable.

Rivals like the Pilot (and Telluride/Palisade) come standard with V6 engines – which the Mazda doesn’t offer.

Standard turbocharged engine makes power comparable to the power made by rivals’ V6 engines . . . but only if you feed it premium unleaded gas. 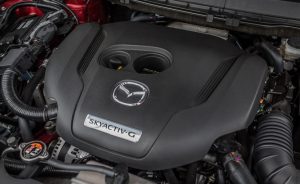 The standard engine in every CX-9 is a 2.5 liter, turbocharged four cylinder engine. An interesting thing about this engine is that it advertises variable output – 227 or 250 horsepower – from the same engine, dependent upon the fuel you use. If you use regular unleaded, the engine delivers the lower number; on premium, you get the higher number. The reason for the difference is due to to the octane of the gas – not the quality of it.

People sometimes make the mistake of thinking that unleaded regular isn’t a “premium” – or high quality – gas but in fact it only means its octane rating isn’t as high as that of premium gas. Octane is a measure of a fuel’s resistance to heat and pressure within an engine’s cylinders. The higher its resistance – its octane – the less likely it is to burn spontaneously, from heat and pressure rather than spark. That is why turbocharged engines, which generate a lot of heat and pressure, often need premium – high octane – to stave off premature, uncontrolled combustion within their cylinders and to develop maximum cylinder pressure, in order to make peak power. 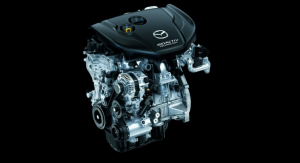 In the past, if you fed an engine that was designed for high octane fuel low octane fuel, the result would be premature/spontaneous combustion, a bad thing for the engine (and ultimately, you). Modern engine management systems can deal with lower octane fuel by reducing cylinder pressure (and thereby, heat and spontaneous combustion) by reducing the amount of turbo boost, for instance. This allows the safe use of lower-octane gas, though it does cost you some power.

But it’s a way for Mazda to give CX-9 owners, in effect, two engines in one. In rivals like the VW Atlas – which comes standard with a 2.0 liter, turbocharged four that makes 235 horsepower – if you want more power, you have to upgrade to the optional V6 to get it.  Here, you can opt to spend a little more for premium gas, whenever the need for more power arises. 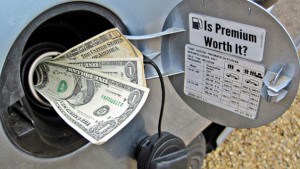 Six rather than eight or nine speeds means a less complicated transmission; also one that isn’t shifting as much – and both of those things could mean longer-term reliability. There’s no significant (to the owner) advantage to having so many gears, the top several being overdrive gears, each one “stepping” just slightly up to the next. There is a slight fuel efficiency benefit – which benefits the car maker in that it helps them to comply with federal fuel efficiency mandates. 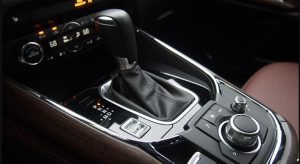 But the difference is so slight – to the buyer – as to be arguably not worth the extra complexity and all of that shifting. The Mazda rates 20 city, 26 highway vs. 20 city, 27 highway for the Honda Pilot, despite having only six gears and one overdrive rather than the Pilot’s eight and two overdrives. The eight-speeded Kia-Hyundai twins rate exactly the same 20 city, 26 highway as the Mazda.

A much more relevant difference is towing capacity. The twins tout a class-best 5,000 lb. maximum tow rating, which is competitive with smaller trucks and enables these two to pull a decent-sized travel trailer. The Mazda maxes out at 3,500 lbs. – same as the Pilot and more than the VW Atlas with its standard four cylinder engine, which has a low-for-the-class 2,000 lb. max standard tow rating. 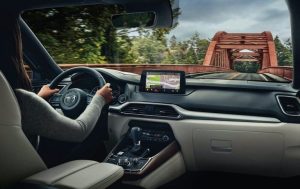 Not everyone can indulge a Miata – though lots of us would like to. But kids and everyday realities sometimes put the kibosh on that, at least for now. In the meanwhile, why not something for the kids and family that’s made by the same company that makes Miatas? There is shared engineering there as well as something arguably more important – that being a shared ideal.

Mazda, today, is what BMW used to be – that being a company devoted to the art of driving, the sheer pleasure of it. To drive a Miata is to know it – but that puts-a-smile-on-your-face isn’t absent here, notwithstanding the different silhouette.

The CX-9’s engine, for instance, is a revvy and peppy thing that seems to enjoy being throttled up to the higher ranges of the RPM band while the six-speed automatic has just the right number of gears for snappy, well-spaced shifts. 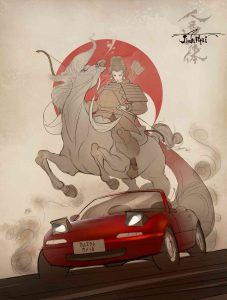 But it is chiefly the suspension tuning that gives the CX-9 a quality Mazda styles Jinba Ittai, roughly translated from the Japanese as the intuitive sense of oneness of a rider on his horse, each attuned to the other. You feel this when you’re on the throttle rather than the brakes in a decreasing radius turn. The Mazda rolls with you, Miata-like.

There is also nearly nine inches (8.8 inches) of ground clearance, very helpful in the snow – especially with standard AWD. 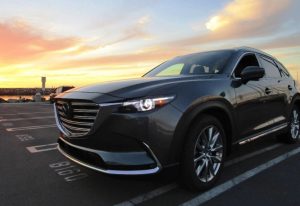 The CX’s silhouette is lither rather than boxier – which is pleasing to the eye as well as salving to the soul, if it’s not yet time for that Miata. And Mazda has managed to imbue the CX with that little bit of Miata-ness without appreciably diminishing this rig’s practical bona fides.

There is a bit less space for cargo behind the third row (14.3 cubic feet) and overall, with the second and third rows folded (71.2 cubic feet) but it’s not that much less than you’d get in the Pilot (16.5 and 83.9 cubic feet, respectively) or the Kia-Hyundai twins (21 cubic feet and 87 cubic feet) unless you really need that additional 5-10 cubic feet of space. In which case, the more practical alternatives may be a necessity. 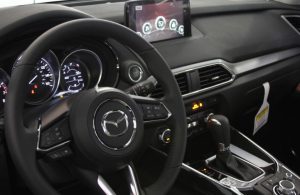 More Jinba Ittai can be found inside this rig, too.

The main instrument cluster, for instance – which isn’t yet another LCD display screen. Instead, very . . . Miata-like analog gauges, suggesting that driving is at hand. There is a gear selector lever, too – as opposed to anodyne buttons/knobs to engage Drive, Reverse and Park.

These are small things, physically – but they are big things, emotionally.

For the person who feels emotions, about driving.

Mazda betrays this feeling, too – in the lesser attention given to the secondary LCD screen for displaying the audio system controls and other peripherals. It is present but not dominating, as it is in so many others – where the object seems to be to divert people’s attention from the vehicle (and the drive) toward “apps” and “infotainment.”

Which, of course, is necessary to do when the vehicle lacks Jinba Ittai.

The CX-9 does not come standard with a power rear liftgate or keyless ignition – but this will delight people who don’t need any help opening the liftgate and like the idea of having a simpler ignition system that won’t ever cost them hundreds of dollars for a replacement electronic fob that only the dealer has (and only the dealer can program).

It does come standard with rain-sensing wipers and heated from seats – features most people will want and like not having to pay extra for. Or be upsold into a higher trim in order to have. 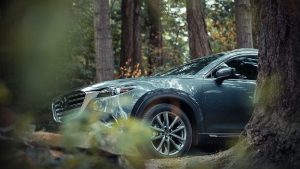 There’s a Carbon Edition – if you’d like the ultimate (as far as CX-9s go) in Jinba Ittai. It features a unique-finish “polymetal” gray paint scheme outside with red leather-covered seats and trim inside. This one also has a windshield de-icer system that uses electricity to thaw the glass faster than blowing hot air on it can.

There are times in life when your needs over-rule your wants. But there are also times when you can get some of what you want along with what you need.