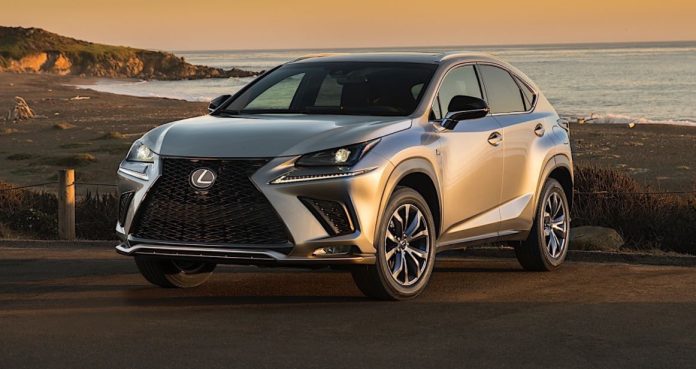 If you’ve not heard already, the 2023 Lexus RX350 will no longer come standard with – or even offer – the 3.5 liter V6 engine it used to come standard with. It will come standard with – can you guess? – a turbocharged four, which seems to be on its way to becoming the last engine you can get in anything as the push toward eliminating engines in favor of electric motors gets harder – and maybe soon, impossible – to avoid.

Thus, the new RX has more in common with the NX, its slightly smaller sibling – which already comes standard with the same four cylinder engine.

So what’s the difference? 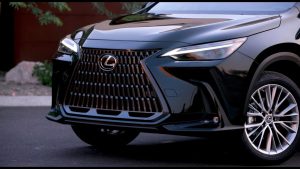 The shapes are very similar, too.

But the price isn’t.

There’s about $10k worth of difference, there.

The NX is Lexus’ compact-sized crossover – relative to the mid-sized RX350. Both share similar styling and have about the same space inside for people as well as cargo. 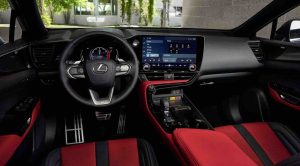 And – now – they have similar powertrains, too. 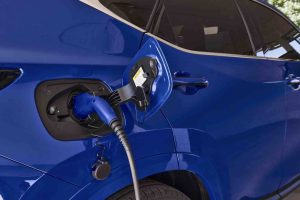 The NX is the first new Lexus to do away with the previous-generation’s mousepad/finger-controller interface – which you used to operate the infotainment system. It has been replaced by a new Lexus Interface that can be operated by voice as well as touch. 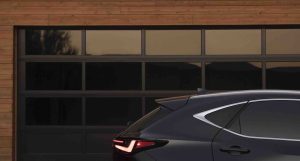 A larger 9.8 touchscreen is now standard and an even larger 14 inch screen is available optionally.

Standard (non-turbocharged) engine in the NX250 doesn’t pack much of a punch.

F-Sport handling/cosmetic upgrades not available with the NX250. 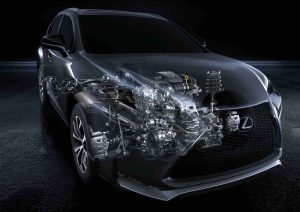 The only engine you can get in any NX is a 2.4 liter four cylinder – as in the ’23 RX. But you can get it four different ways.

The first way is as it comes in the NX250, which is without a turbo. This way, it makes 203 horsepower. It’s paired with an eight speed automatic (not a CVT) and you can choose either front-wheel-drive or (optionally) all-wheel-drive. This combo gets to 60 in 8.2 seconds with FWD and 8.6 with AWD. Gas mileage is essentially the same, either way – 26 city, 33 highway with FWD and 25 city, 32 highway with AWD. 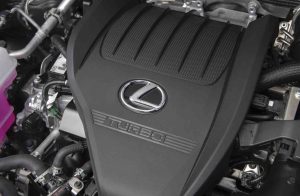 The second way is as it comes in the NX350, which is with a turbo. This way, it makes 275 horsepower – nearly as much horsepower as the 3.5 liter V6 that was standard in the RX50 (that made 295 horsepower) and significantly more torque 317 ft.-lbs. vs. just 268 for the retiring V6. The turbo four is also paired with an eight speed automatic and standard AWD. This combo gets the NX to 60 much sooner – in 6.6 seconds. Gas mileage is only slightly lower than the AWD-equipped NX250’s too: 22 city, 29 highway. 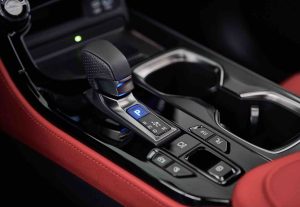 How about a third way?

The NX350h pairs the 2.4 liter engine with electric motors (that power the rear wheels) and a lithium-ion battery that gets recharged as you drive, using the engine as a generator as well as propulsion. The combo produces a total of 239 horsepower, enough to split the difference, 0-60-wise, between the NX250 and the NX350. The hybrid can make the run in 7.2 seconds and achieves 41 MPG in city driving and 37 MPG on the highway. 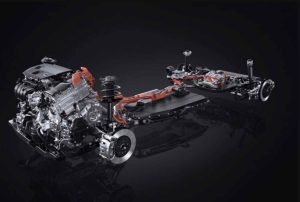 The NX450h is also a hybrid, but one that can be plugged in – so that you don’t have to burn any gas to top off the battery pack. It can also be driven entirely on battery power – at normal road speeds – for about 36 miles – because it has a more powerful lithium-ion battery pack than the NX350h. That one’s hybrid side is more an assist than primary propulsion. It is designed to minimize the engine running – powering the vehicle’s secondary systems when the NX isn’t moving and under light-load conditions, such as during deceleration.

The plugin- NX450h can operate like a full-time electric car, just not as far. But with the advantage of not having to plug it in for a recharge if you haven’t got time to wait for one. 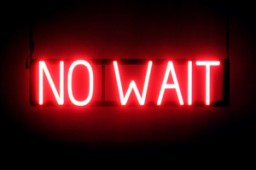 Like the NX350h, you can just fill ‘er up – with gas – and be on your way in minutes rather than hours. And you may be able to avoid filling up much, if you can plug it in often. On household current, it takes about two-and-a-half hours to fully recharge the NX450h’s battery pack.

This version of the NX is also the speediest, getting to 60 in 6 seconds flat.

One thing you don’ get is the RX’s 3,500 lb. towing capacity. It’s hard to understand why that is given both the NX350 and the RX350 have the same drivetrain and are similar in other ways as well. It’s probably because Lexus wants the RX to be different in at least a couple of ways, so as to avoid too many people buying the less-expensive NX instead. 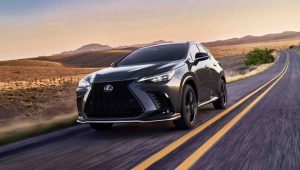 The new NX350 dramatically upstages the old NX300 – which offered nothing larger (or stronger) than a 2.0 liter engine that developed 235 horsepower. Equipped with its optional 275 horsepower 2.4 engine, the ’23 NX350 is nearly one full second quicker to 60, which is a difference you can tell by feel rather than the stopwatch.

The turbo’d engine’s generous torque production – which is higher than that produced by a typical V6 without a turbo – is also almost always-at-the-ready in that it is produced at just 1,300 RPM and maintained all the way through 3,600 RPM. The result being a powerful engine that’s also an easygoing one; you generally don’t need to floor it to get the acceleration needed for moving away from a stoplight with alacrity. 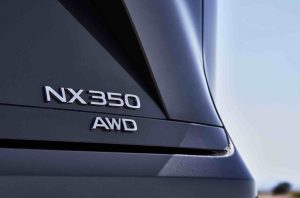 However, the base-engined new NX (the NX250) is slower to 60 because it comes with a less powerful engine than the previous NX300 came with. This means if you want at least the acceleration you would have gotten with the previous NX300, you will need to upgrade to the NX350 – or one of its two hybridized variants. 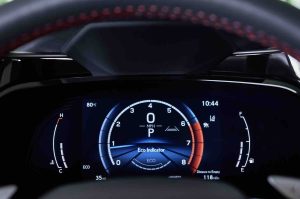 Which goes deeper than what’s under their respective hoods. 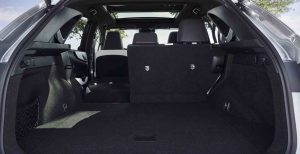 The new NX is still a compact-sized crossover, as contrasted with the mid-sized RX350. The latter is 192.5 inches long vs. 183.5 inches long for the former. But on the inside, the size is almost the same.

But it’s behind the seats where the similarities are most striking. 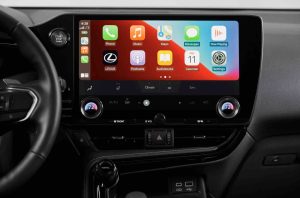 Now, you can get an RX with a third row – which you can’t, in an NX. But it’s interesting how otherwise close in terms of interior space the two-row versions of these two Lexus crossovers are.

Especially given how the same they are now, under the hood.

On the outside, the two look a lot alike as well. Both have similar silhouettes as well as “faces.” You almost have to park them side-by-side and get out a tape measure to be able to tell the difference between them. 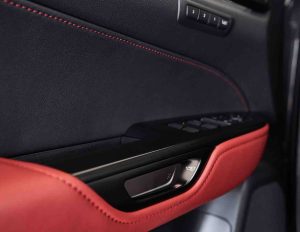 But there is one big difference between them. At least, there will be – until the ’23 RX becomes available.

The NX was first to ditch the index-finger trackpad/mouse input system that Lexus had been putting in its vehicles in favor of an entirely new and more conventional system that relies on tap-swipe touchscreen controls. These are embedded in a new . . . touchscreen that’s angled toward the driver and within easy reach as well as line-of-sight. The old system was much harder to use accurately while the vehicle was moving, because it was hard to tell by feel (without looking) where your finger was moving.

It also stores user profiles/preferences in the cloud – which settings can be accessed (and used) in other Lexus vehicles equipped with the same system. Voice command is available, too. 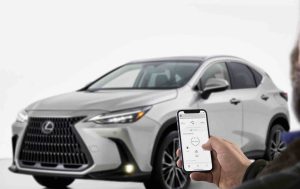 There are rotary knobs and buttons for adjusting cabin temperature as well as increasing or decreasing the volume of the sound system. It’s a much better system than the old system – and the NX got it first.

Another bit of techno-newness is electric door locks. Or rather, electric door openers – and closers. They’re similar-in-concept to those used by Tesla with the exception of having manual handle-over-ride, in the event the electric actuators don’t work. 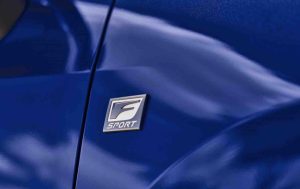 Thoughtful – useful – touches include standard USB power points in both the old and new style. There’s also a 12V power point for the old school, who may still have and wish to use devices powered that way – such as radar detectors, for instance.

You can also get “fast response” interior heating, which you’ll appreciate on a cold day.

One thing you can’t get – with the NX250 – is the F Sport package, which centers on an Active Variable Suspension system (basically, adjustable dampers that allow the ride to be firmed up upon demand) and a 20-inch wheel/tire package, plus unique-to-this-version gauges and gloss black trim. 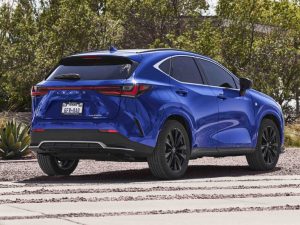 Now that the RX no longer has what you used to get for the price, maybe paying less for the NX – and getting the same – makes more sense.