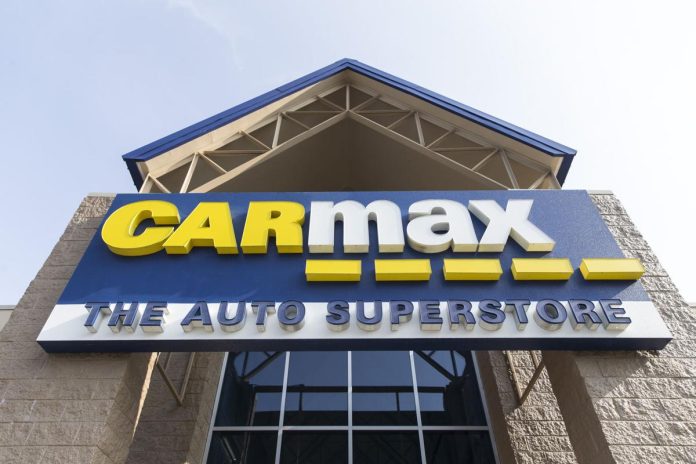 When a person begins losing a lot of weight – and it’s not because they’ve been dieting – it’s what they call a clue in law enforcement that something might be wrong with that person.

Here are two such:

The first is Carvana – the used car chain with the glitzy towers of used cars, that sent flatbeds out to pick them up and drop them off at buyers’ houses  that was supposed to wipe chains like Carmax off the map – is plunging toward the deck like Air France flight 447 back in ’09. The chain’s stock is nearly worthless. Bankruptcy appears imminent. 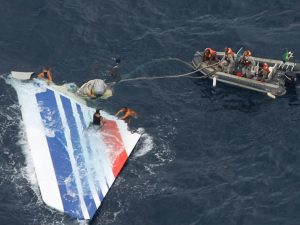 The second is Carmax – which appears to be coming along for the ride.

The numbers for the third quarter that ended in November are as alarming – for Carmax – as the diminishing range indicator in the gauge cluster of an EV on a cold day when you are far from home. Profits have plummeted by 86 percent, which the company attributes to “affordability challenges” and a “deteriorating used car market.”

The two are, of course, inextricably – fatally – related.

There is an “affordability challenge” because the used cars Carmax (and Carvana) are trying to sell were most of them bought at artificially high prices, which were rendered so in part by an artificially induced scarcity of new cars induced by the force-closing of new car assembly lines (and microprocessor, or “chip” production lines) during the manufactured “pandemic. Which left people who wanted new cars looking for used cars, because such were the only available cars.

This temporarily upticked demand for used cars and – there being a limited supply of them to compound the perverse incentives – the market value of used cars rose to an equivalence with the new cars that weren’t available. 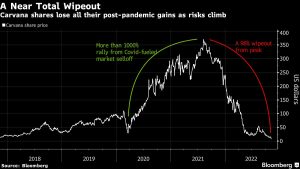 People who owned a vehicle were being offered tempting sums to sell them to dealers – and outfits such as Carvana and Carmax – to be re-sold by these dealers and chain sellers for even more money. For awhile, there was a lot of money to be made this way.

And then the music stopped.

It stopped, in part, because the new car assembly lines resumed assembling cars and so there was an increase in the supply of new cars. This, in turn, lowered the artificially high market value of used cars generally but also specifically those held in inventory by used car retailers such as Carvana and Carmax, who bought high – and now find themselves in the position of being obliged to sell low. 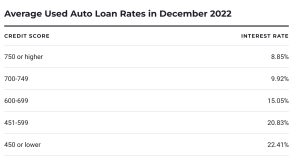 Bad enough. Worse – for them – is that interest rates are higher now, on both new and used car loans. Which makes it harder for people to finance the purchase of any car.

But interest rates are much higher on used car loans.

According to a recent article published by U.S. News, the cost of money (which is what interest amounts to) for a used car loan is now almost 9 percent – if you have an “excellent” credit score of 750 or higher. This is about twice the cost of money on a new car loan – which can and often does make it more costly to buy the used rather than the new car. It will, for sure, if you haven’t got “excellent” credit – in which case you might be looking at interest rates as high as 15-20-plus percent on an “investment” that is depreciating in value even more rapidly than usual precisely because of the unblocking of supply chain holdups that had temporarily limited the available supply of new cars.

Which has popped the “value balloon” of used cars.

Why pay $400/month for a used car when you could finance a new car for the same or even less? 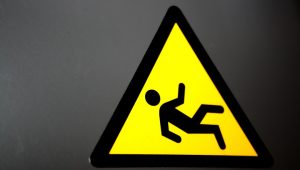 The good news for used car buyers who don’t need to spend money on money is that the “affordability crisis” in the used car market is going to make used cars much more affordable. It will soon be as it was, prior to the “pandemic.”

That is to say, it will be a buyer’s market – for those who have the cash.

There will be fire-sales of inventory when Carvana and Carmax go the way of Blockbuster Video. And these fire sales of inventory ought to further depress the used car market, generally. People who want to sell their used car – or trade it in – will find they are no longer in the catbird seat. They will have to accept whatever the market will bear. And that will continue be less for at least as long as interest rates – the cost of money – continue to increase, which seems likely to continue for some time to come. It is a a problem compounded by the decrease in the buying power of money, itself – what is styled “inflation” but which is in fact an increase in the supply of money, which causes a dilution of the value of the money already in existence.

But, for those who have money – even if devalued – and do not need to spend money on money (i.e., interest) it is time to sit down in the catbird seat.

There will be deals to be had – for those who can still pay.