The worse the economy gets, the more popular motorcycles become. They’re a cheap – and fun – way to get around. “Rat bikes” – older models that maybe don’t look showroom-new anymore but run fine – even more so. You can still find mechanically sound, if  a bit aesthetically impaired, rat bikes for $2,000 or so. Sometimes, if you’re lucky, a lot less so. As an example, about a year ago, I stumbled on a 1983 Honda GL650 Interstate. This is a middleweight touring bike with a windshield, fairing and lockable, weatherproof storage compartments – making it ideal for longer trips and much more practical/useful than a sport bike. I snapped it up for $1,400 with 12,765 original miles on the clock. I now have a 60 MPG bike that’s a lot more appealing to me than a 50 MPG – and $25,000 – hybrid. 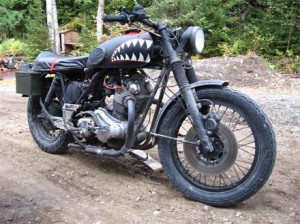 A buddy scored a couple of older Nighthawks – each of them costing less than $1,500. They have some dings; the chrome’s not perfect anymore. But the bikes are 100 percent solid, mechanically.

But, older bikes have their owns set of issues. The first of these is that many dealers won’t touch a bike older than 15 years or so. Some draw the line at ten. Many people do not know about this informal rule – and get a surprise when they take their newfound oldie in for a valve clearance check and carb adjustment.

This is very much unlike the situation with cars. You can take a 20-year-old Honda to virtually any Honda dealer – provided it’s a four-wheeled Honda.

In any event, it’s important to factor this fact into your decision whether to buy an older bike – especially if you can’t do most major (and even minor) work yourself. Ask around and see whether there’s an independent shop/mechanic in your area you can go to. There probably is – with the caveat that specialists are often even more expensive than a dealer.

The second issue is related to the first: parts. Both availability and expense. The first is fairly obvious, even if many don’t think about it much. 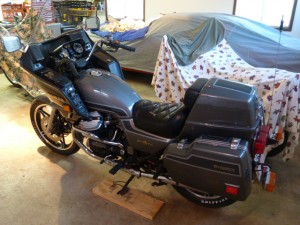 The second less so.

The good news is that, for most major brands (Honda, Kaw, Harley, etc.) basic maintenance stuff (oil filters, brake parts, etc.) usually remains easy to find either at the dealer parts counter or through aftermarket mail order suppliers such as Dennis Kirk (www.denniskirk.com) or (for the Japanese stuff) Sudco.  Even after the bike is 30-plus years old. I have a ’76 Kz900, for example, and it has never been a problem to get those things.

Sometimes it takes a few days for them to get here via UPS. But no big deal.

However, after about ten years or so, the availability of factory-new replacement trim parts, electrical bits and pieces and even things like factory footpegs/grips, etc. often begins to peter out – especially if the bike was not a popular model that was produced in large numbers over a period of several years. Watch out for low-production bikes built only for a year or two – like my one-year-only ’83 GL650. If I ever need certain parts unique to this one model, built for only one model year, I will be on a Mission!

Honda is better than most in terms of parts availability – chiefly because while old man Honda himself was alive, it was official company policy that Honda would continue to manufacture parts for all the bikes it ever made – all the way back to ’60s-era Honda Dreams, even. But old man Honda is dead and gone – and the policy has changed. While it is still generally easier to scrounge parts for older Hondas, it’s not as easy as it used to be.

You may have to scrounge the used market (or eBay) to find what you need. It’s smart to stock up on spares for stuff you know you will need eventually – such as grips and pegs. Aftermarket stuff can usually be made to work, but factory stuff is preferable.

But here’s where you can get burned: While the cost of a rat bike itself may be miraculously low, sometimes, the failure of a major/critical component can render the whole works a money pit quicker than you can say ElectraGlide in Blue.

Example: A croaked alternator/stator on some bikes can be a $400 deal; radiators are similarly expensive. Ditto CDIs and other electronic components without which the bike will not run. And which renders the bike effectively worthless both to you and to anyone you might try to sell it to.

Of course, these are precisely the parts most likely to croak on you, if you have an older bike. 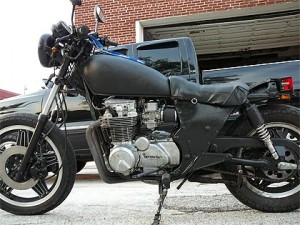 Like cars, some bikes (and brands of bikes) are known to be more (or less) trouble-prone than others. Given the repair-to-worth ratio of a $2k bike, it is doubly important to take a little time to research the known history of any older bike you’re thinking about buying. Fifteen minutes of Googling is usually plenty of time to discover any significant red flags. The Internet is a wonderful tool. Irate owners of a problem bike can be counted on to leave lengthy posts about their experience. And it may not be that the bike’s “bad” – just expensive to fix.

Check owner’s boards for the make/model of bike you’re interested in. The info is readily available. If you don’t find anything specific, ask around. If you’re thinking about an old Honda CB750, say, find an owner’s BBS (or general Honda bike board) and leave a post asking previous owners and others for their input, pros and cons. Ask people you know who know bikes, too.

Be aware that water-cooled bikes are more complicated – and potentially expensive – than air/oil-cooled ones. Check for obvious signs of marginal maintenance such as dirty, obviously old brake fluid in the master cylinder, chewed-up sprockets, indicator lights that don’t work and gauges that read abnormally – or not at all. Listen for weird noises – and look for things like excessive smoke. Does it start easily? Does it shift smoothly? The usual, common sense checks. Trust your intuition. It’s usually right.

Bottom line, a low-bucks rat bike is a great bike to have – provided you’re careful about which one you grab by the tail.

The Toyota Canary in the Coal Mine