In just a few months from now, it will be $2,500 easier to “buy” a new electric car. I put “buy” in quotes because in fact, other people will be paying a good chunk of the purchase price – to the tune of a $10k direct cash payment (it is euphemistically called a “tax credit”) per car, courtesy of The Man With The Plan. (But without much understanding of economics or engineering.) 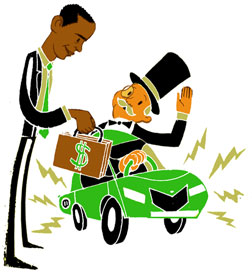 A line item snugged deep within Barack Obama’s 2013 federal budget – which hasn’t passed yet and won’t be passed until after the (s)election this November – will up the existing electric lemon inducement from the current $7,500 per car to $10,000 per car. This means the subsidy payout alone on something like a new Chevy Volt will be almost as much as the total cost (without any subsidy) of a decent little economy runabout such as the  2012 Nissan Versa.

And the government giveaway  will be immediately available, too – dangled in front of “buyers” (cough) “at the point of sale, making it transferable to the dealer … allowing consumers (italics mine) to benefit when they purchase a vehicle rather than when they file their taxes.”

Well, yes, they will be consuming . . . other people’s money. A tremendous buttload of it. How much is a tremendous buttload, exactly? Well, if you assume 10,000 electric lemons, that’s $100 million bucks. And Obama’s stated goal is to “…put one million (italics mine) advanced technology vehicles on the road by 2012.”

Don’t want to? Here, I’ll do it for you: It’ll come to about $10 billion – if Obama’s goal of one million electric lemons is realized. That’s just under 10 percent (in inflation adjusted dollars) of what it cost to put Neil Armstrong on the Moon. Back in ’69, at least, the American people got something for their money.  After all, Apollo 11 did make it to the Moon – and back. Most electric cars can’t make it to the store – and back. 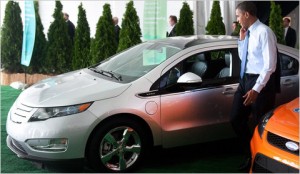 Even with the existing $7,500 tax credit and sweetheart lease offers as low as $199 per month designed to “move product,” not much product has been moving. As of mid-September, year-to-date Volt “sales” have yet to reach 14,000 – just a bit shy of the projected 40,000 GM anticipated.

And how about those Obama Jobs the Obama Car was supposed to confect? GM has had to idle the production line where the Volt is (well, was) built – and “temporarily” lay-off 1,300 workers.

What’s shocking is that GM – apparently – wasn’t able to anticipate any of this. It does not require the proverbial rocket scientist.

So, are the guys in charge stupid? How else to explain their inability to anticipate that a car that costs more than $33,000 – that’s after the current $7,500 tax subsidy – and which will still cost $30,000 after the pending $10,000 subsidy or as much as an entry-level Lexus or BMW – might not be very appealing to people concerned about paying $3 and change for a gallon of gas? 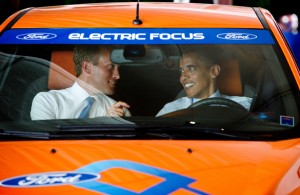 People who, you know, are concerned about spending money – unlike GM and Obama.

Well, that may be just the point. They’re not stupid. It’s simply that it’s not their money. It’s yours. Always more where that came from.

So, they don’t care that the Volt – and the rest of them – suck ass, economically speaking. Functionally, too. Though interesting as technology demonstrators,  they still can’t go nearly as far – without lots of hassle – as the most humble non-electric new car.

Perhaps a car like the Volt will pay for itself down the road, in the form of reduced operating costs (well, except for the cost of electricity and that $2,000 charging station you”ll need to have installed in your garage). But even assuming the Volt and its kind are cheaper to drive, long term – and that’s by no means certain or even probable – they still cost Lexus-BMW money up front. Even with the $7,500 subsidy. Even with the pending $10,000 subsidy. And people in a position to buy a Lexus or BMW want… a Lexus or a BMW. Not a Chevy.

And those who aren’t in a position to afford a Lexus can’t afford this Chevy.

Same problem with the Nissan Leaf electric car. It’s not selling well, either. Could it have anything to do with the car’s $35,200 sticker price? Even taking $10k off the top, a Leaf still costs about $15k more up front than the Versa sedan – and the $10k-ish Versa can be driven 300-plus miles non-stop whereas the Leaf stops – for hours – after about 70 miles. 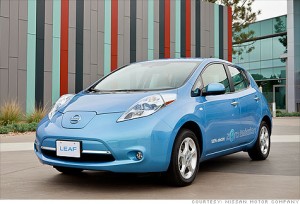 It’s an economic Catch 22 – and ought to be an obvious one.

If money’s tight, you don’t spend $30,000 on anything you don’t absolutely have to spend it on. Certainly not an indulgence such as a brand-new car. Even if it’s free to operate it, you still have to buy it. And if the car in question costs $30k – remember, that’s after the proposed $10k discount – that’s still $30,000 out of pocket. Anyone who got through sixth grade maff can see it’s probably smarter to buy a $10,000 new car like the Versa – or better yet, a perfectly serviceable $6,000 or so used car. If you’re trying to avoid the poorhouse, the last thing you want is a car payment for the next 5-6 years.

Hence, it’s no surprise – or ought not to be a surprise – that the typical Volt “buyer” (according to GM CEO Dan Akerson) is someone earning $170,000 per year. Someone, in other words, who doesn’t need to worry much about the cost of gas. Or the cost of cars. Someone, in other words, who can afford an expensive toy. Unfortunately for GM – and for us – there are only so many such people. The mass market GM needs to make a car like the Volt economically viable doesn’t exist – because it cannot exist.

It is an oxymoron.

People who need something affordable to drive don’t buy $30,000 toys. Which is why, Mr. President, the Volt and the Leaf aren’t selling.

The whole thing’s a disaster of Edsel-esque proportions. 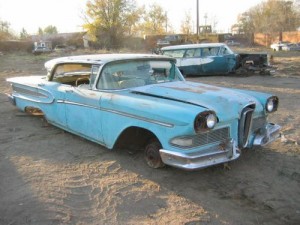 GM has thrown more than $1.2 billion – remember, much of this is being our $1.2 billion, via the bailout – at the Volt. And GM can’t give the things away – literally. The two-year $199/month lease deal GM recently put on the table out of sheer desperation to get at least some of these things off the dealer’s lots – and maybe save a little face – means there are people driving around in $89,000 Volts for less than $5,000 for two years – on your nickel and mine.

And it’s still insufficient inducement to “move product,” for all the obvious reasons already discussed.

But unlike the Edsel fiasco, GM – and The One – insist on throwing good money after bad. And unlike Ford, which lost its own money on the Edsel, this time, it’s our money being squandered. (At least Nissan isn’t getting bailout money on top of the electric car subsidy money.)

There is apparently no limit to it, either.

When $10,000 per car proves inadequate – which it will – the subsidy will probably be increased, perhaps to $15,000. Maybe they will decide to just pay people to take the cars home. Nothing down – and nothing per month. Just hand them over to anyone who wants – and give these “buyers” a monthly stipend to cover the cost of electricity. Maybe then they’ll “sell.” The One will explain that he has “created jobs” and is “investing in the future,” too. 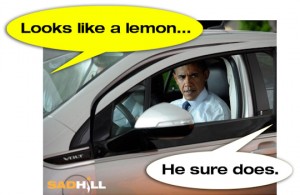 None of this, of course, would ever have happened if moral hazard were operative. If GM and Nissan and everyone else had had to put their own money (and their own corporate asses) on the line, the Volt, the Leaf and all the others would never have been produced. Not as production cars, at any rate. Maybe as concept cars – to show what might be doable and to gauge market reaction. But never in a million years would GM have put one billion on the line – except for the fact that the one billion was not GM’s to put on the line. Or at least, not GM’s to worry about losing. If the Volt fails – and so far, it has failed catastrophically – it won’t be GM left holding the bag.