We may soon have access to affordable new cars once more – if Uncle will allow it. 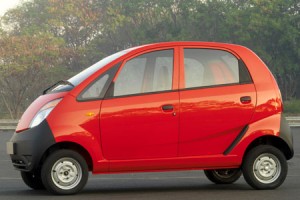 Tata Motors – a major automaker in India – recently announced plans to bring its Nano mini-car to the United states within three years. The Nano is smaller than a BMW Mini Cooper coupe but  being laid out as a four-door – with a short but very tall profile – can realistically accommodate four adults, which cars like the two-door, four seat Mini (and Fiat 500 and Scion iQ) can only do unrealistically – and two seaters like the Smart car can’t do under any circumstances.  The Nano would thus be the first micro-sedan sold in the U.S.  And thus, the first potentially family-viable/primary car micro car sold in the U.S.

In India, the Nano sells new for the equivalent of $2,500 U.S. dollars – a fraction of the cost of the least expensive new car you can currently purchase in America, the Nissan Versa 1.6 sedan – which lists for $10,990. 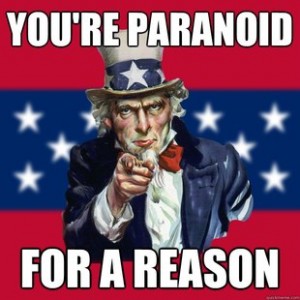 The Nano as currently constituted for sale in India will never pass muster with Uncle – whose demands that new cars be made “safe” (according to its Rube Goldberg definitions) as well as “emissions-compliant” (even though the emissions output of any car equipped with a catalytic converter and fuel injection system – which means almost every vehicle built since the late 1980s – including the Tata – is negligible) will make it impossible to get the $2,500 Nano here.

Instead, we’ll get a Nano that’s priced closer to the Versa’s $10k MSRP.

Tata’s founder Ratan Tata told Automotive News as much, hinting at a production car MSRP of around $8,000 or so.

Which is probably optimistic given not just Uncle but also inflation. The purchasing power of Fed Funny Money is depreciating at a rate of about 6 percent per annum, if you run the numbers honestly (something neither the Fed nor Uncle ever does). That means in three years’ time, a Nano that might sell for $8,000 in Fed Funny Money today will require at least $1,440 more (that’s not compounded – and assumes inflation remains “stable” at 6 percent annually).

That puts us right close to $10k – before Tata tallies the tab of complying with Uncle’s demands.

The Nano will probably require at least four air bags – and probably six, given it is a very small car and therefore inherently less crashworthy than a larger, more substantial car. (The Scion iQ – reviewed by me here – has no less than 11 air bags.) The car’s body itself will likely have to be changed up in order to comply with the various bumper impact, side impact and roof crush/rollover requirements set forth by Uncle. Plus back-up cameras and probably auto-start, too. All these things will make the U.S.-spec Nano heavier, less efficient and more expensive. It will be nothing less than a miracle if the car can even be made to comply with the sheafs of ukase without Tata having to design and build an entirely new car. 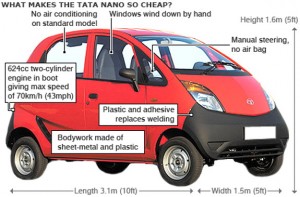 That goes for “emissions,” double-plus good.

I’ve written before (see here) about the diminishing returns on that front. Most people outside the car business have no idea how little progress has been made since the late 1980s – because most of the progress was made around that time and since then, the automakers have been chasing literally fractional decreases in tailpipe emissions. When you hear or read about a proposed “10 percent” reduction in the emissions output of new cars, you ought to read the fine print – which of course is never published. The fine print is that the reduction won’t be 10 percent of 100 percent. It will be 10 percent of the 3-5 percent of the exhaust stream that isn’t either carbon dioxide or water vapor. Everything else has already been chemically scrubbed by the catalytic converter. An ideal air-fuel ratio is perpetually maintained by a modern car’s fuel injection system. Genuinely harmful pollutants – the stuff that forms smog – are virtually nil. Have been nil for decades.

But Uncle can’t admit this – because to do that would mean no more justification for new ukases.

So, even if the Nano is – like any modern car fitted with a catalytic converter, 02 sensor and fuel injection – already 90-95 percent “clean” at the tailpipe, that will not be sufficient. It will have to be 96-98 percent clean, as is required of current (and soon to be here) cars – no matter the cost (to consumers).

That is the way of Uncle. 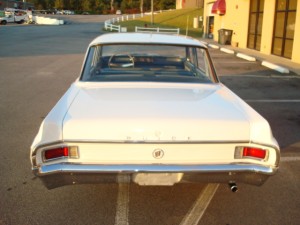 Just the other day, I was over at my friend Graves’ place. He has a ’63 Buick Special sedan. In its day, this was a modestly priced, middle-of-the-road car. But it had a V-8 engine and a spacious, open-feeling cabin. And even though it only had a two speed automatic, it still could return 20-something MPGs on the highway – because it only weighed about 2,800 lbs (a current mid-sized car typically weighs closer to 3,800 lbs.) And it only weighed about 2,800 lbs. because it did not have to comply with the “safety” ukases in effect today.

And it only cost $2,600 (base price) back in 1963 because it didn’t have to have air bags, or back-up cameras, or auto-stop. $2,600 is equivalent, in today’s Fed Funny Money, to about $19,662 (see here if you don’t believe me). To put a finer point on it, back in ’63, an American could buy a V-8, rear-drive sedan for about the same money you’d have to spend today to get into a decently equipped four-cylinder powered FWD compact.

Because the Buick did not have “value added” by Uncle.

Just wait till he gets through with the Nano… .