Traffic cops are becoming ever more dangerous to our wallets – and all-too-often, our persons. Since we can’t properly defend ourselves against their depredations, avoidance is therefore becoming all the more important. If you see them before they see you, you stand a good chance of not having to interact with them at all. 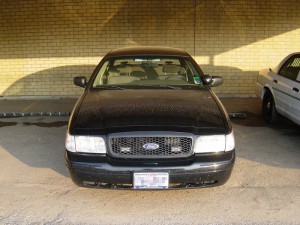 Unfortunately, cops have become harder to spot. Because they no longer restrict themselves to the stereotypical cop car – the Ford Crown Vic. These are no longer being produced – and so are being replaced by cars that blend into the background better than the big Ford. Cops are also driving more unmarked cars – and even marked cars are harder to pick out before it’s too late because of their low-profile light bars and paint schemes designed specifically to make them less obviously cop cars. 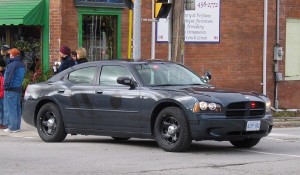 But, not all the news is bad news.

First, most cars out there are not cop cars – and many of them you can write off with near 100 percent certainty as not being occupied by someone out to Harass & Collect:

In the past, cops have used two-door cars for traffic work – in particular, as “pursuit” cars. Examples include the 1980s-era Ford Mustang LX and (more recently) the 1994-2002 Chevy Camaro. However, these models have been out of service for years – decades, in the case of the old 5.0 LX Mustang. While it’s possible some departments may be using newer models such as the Pontiac GTO (there was at least one of these running around SW Virginia circa 2008)  it is very unlikely. 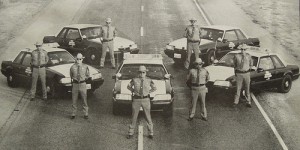 American traffic enforcement is overwhelmingly “buy American” minded. There have been exceptions here and there (at one time, the Falls Church, VA cops were using Volvos) but the rule is – cops cars are American cars. Part of this is patriotic glad-handing (it looks bad when American cops are driving “foreign” cars); part of it is practical politicking (government fleet buyers incline toward the home team brands for the favor-currying it involves) and part of it is due to the fact that – for the most part – the import car companies do not make cars suitable for cop duty. Historically, cops have preferred large, RWD-based vehicles – models like the Ford Crown Victoria. That’s still mostly true today.

Maybe on Miami Vice – but  even then, Sonny’s Ferrari was not used for traffic enforcement. Out in the real world, cops may use luxury vehicles seized via asset forfeiture proceedings – but for undercover and other purposes, not for issuing pieces of payin’ paper. The guy in the M5 sitting next to you at the red light, revving his engine, is looking to race – not write you up. 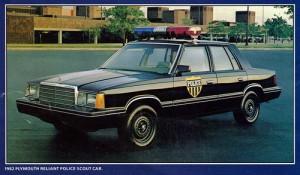 I won’t say never, because there are probably some rural departments that hang onto their cruisers that long – or even longer. (There was – and still may be – a company that refurbishes worn-out Chevy Impalas – the older, full-size/RWD ones that look like Shamu the Whale – and the more recent Ford Crown Vic.) But – as a general rule – most cop cars get retired long before they reach double-digit age. Many are run almost continuously, seven days a week, year round. It is not unusual for a cop car to see 100,000 miles in less than three years. Which is why it’s unusual to find one still in service after ten. For the most part, you can breathe easy if it’s older – even if it’s a model (like the Vic) that is popular with cops.

*Compact cars are rarely, if ever cop cars –

Cops are beefy – hence, they favor big cars. There is also the issue of carting the cattle (that’s us). Small cars  have backseats unsuitable for “transport.” Even the otherwise popular Dodge Charger has proved problematic in this regard – and it’s only a little bit smaller than a Ford Crown Vic – and huge compared with anything in the compact class. Now, in the past, cops did use small cars like the K-car (believe it or not) and before that, the Chevy Nova – which in the ’70s was considered a “compact.” But in modern times, to my knowledge, no compact car has been put into service as a traffic patrol car. If it’s a compact coupe – or an import brand compact – you can be 99.999 percent confident it’s not a cop. 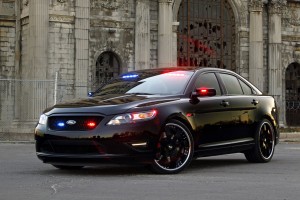 For the most part, cops have shunned these vehicles for traffic duty because they’re too small, too expensive, too slow – or too fragile. Being either FWD or based on FWD cars, they don’t hold up as well to jumping curbs and other such abuse – and in general cost more to maintain. Also, until fairly recently, the imports dominated this class of vehicle – and as mentioned earlier, the people doing the fleet buying for cops tend to buy American. If it’s an import crossover, you’re safe. If it’s compact (Honda CR-V/Subaru Forester-sized) you’re safe. If it’s a high-end crossover (BMW, Acura, Cadillac, etc.) you’re safe.

Ok, so which cars should you be wary of?

* Dodge Charger – marked and unmarked.
* Jeep Grand Cherokee (federal and park pigs seem to like these a lot).
* Ford Crown Vic, Taurus and Explorer (the Taurus is a toughie because there are a lot of them out there. Also true of the Explorer).
* Chevy Malibu and Impala; Chevy Tahoe. 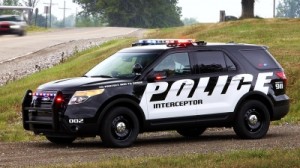 If the car in question is a primary (and solid) color – such as all white or all navy blue – your threat indicator should notch up. Though “low profile” light bars and so on are harder to discern, a good eye will notice these accoutrements of cop cars. Civilian cars never have wig-wag lights built into the grille – it’s illegal as carrying an AK into traffic court. And civilian cars usually don’t have windows tinted so heavily you can’t see inside the car – again, because it’s illegal. If you see lights, tinted windows and multiple antennae – it’s a damn good bet there’s bacon in the air. Exercise caution.

Final thing: Military pilots used to be taught to recognize the profile/silhouette of an enemy aircraft at a glance. You can do the same by memorizing what cop-likely cars look like, especially the shape of their headlights/grilles and tail-lights, so you can pick them out efficiently (and pre-emptively). This is especially helpful when operating at night.