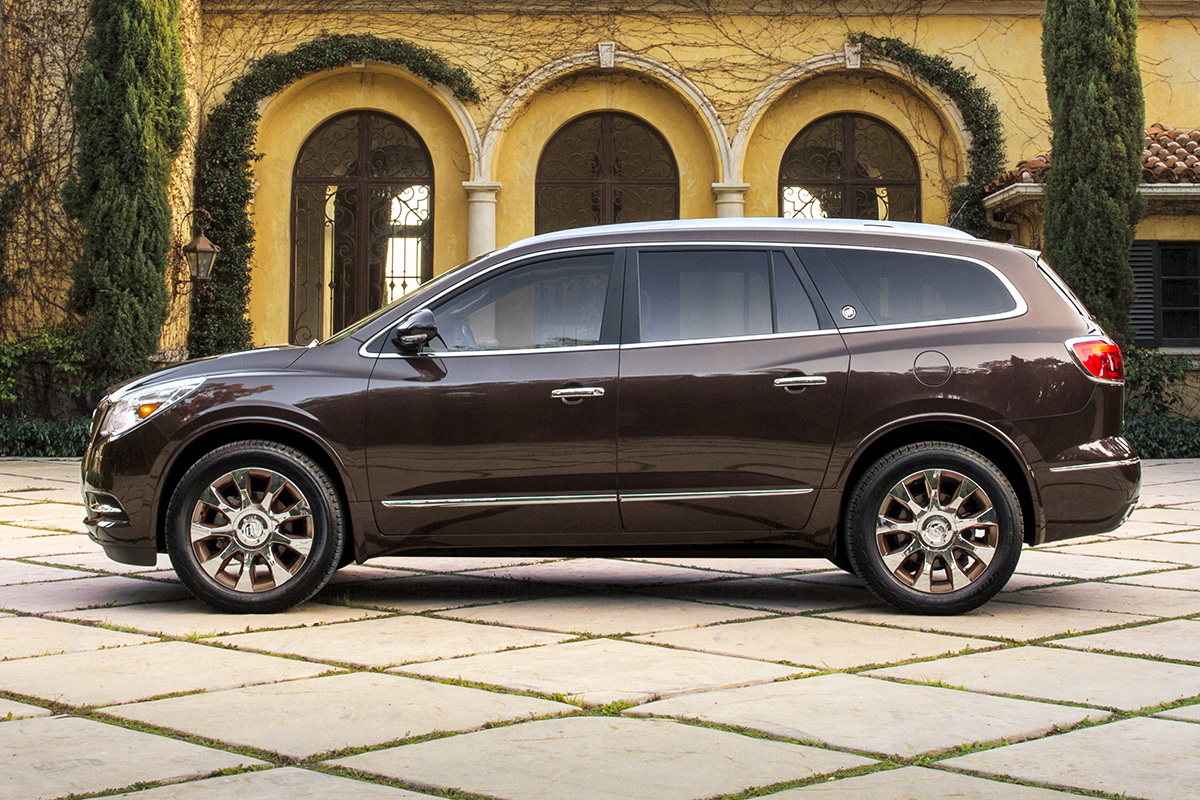 GM still has two “near luxury” brands – Buick and GMC – which is double what other car companies have. They have the mass-market line (Toyota, for example) and then the luxury line (Lexus). 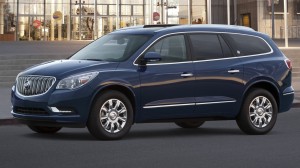 Theres nothing in the middle.

With GM, you can go incrementally up two steps from the mass-market brand (Chevy) before getting to the top-of-the-line brand (Cadillac).

Or down a step.

As a case in point, consider GM’s full-size/three-row crossover SUV. It is sold three ways, with prices that are less … or more … and sometimes, overlap. 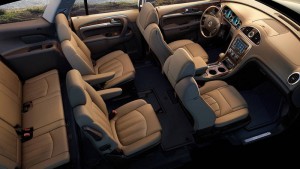 Mechanically, these are all basically the same rig.

They differ – slightly – in terms of styling and (nominally) the Buick and the GMC are positioned as the “nicer” versions but as the pricing structure reveals, this can get confusing. A loaded Traverse is arguably “nicer” – and pricier – than a base Enclave. And is a loaded Enclave any less (or more?) “nice” than a loaded Acadia Denali?

GM retorts that the Buick version is the softer/quieter version, a kind of seven-passenger ermine slipper – while the GMC is more “rugged” (though also “nicer” than the Chevy, which is also “rugged.”)

My teeth hurt, too. 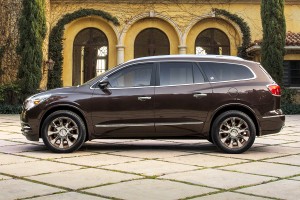 The Enclave is the Buick-badged version of GM’s full-size crossover SUV. Its big sell is that it has more interior space (especially cargo room) than an Acura MDX, a Lincoln MKT, an Infiniti QX60 or an Audi Q7 – but isn’t as huge on the outside as something like a Chevy Suburban (or Infiniti QX80).

It shares mechanicals with its Chevy and GMC-badged siblings but – being a Buick – it comes with luxury features such as three-zone climate control, leather trim and 19 inch wheels standard whereas these are available optionally in the Chevy and GMC.

All Enclaves come standard with the same 3.6 liter V6, six-speed automatic and three rows of seats. 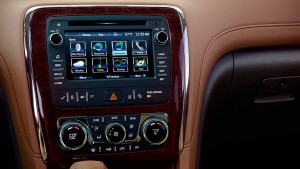 Like its Chevy/GMC siblings, the Enclave (all trims) gets 4GB in-car Wi-Fi and the latest version of GM’s On Star concierge system.

Premium trims can be ordered with a Tuscan package that adds 20-inch chrome wheels with bronze trim accents.

This will be the final year of the current-generation Enclave; an all-new model (three all-new models, actually) is on deck for the 2017 model year.

Third row is more than just a jumpseat for kids, as in smaller rivals like the MDX and QX60.

Class-best cargo capacity behind third row and with first and second rows folded down.

Get one for a couple thousand less than Acura asks for an MDX or Lincoln wants for an MKT.

Final year of this generation Enclave probably means you’ll be able to negotiate a sweet deal on one as dealers try to clear inventory to make room for the new/2017 Enclave. 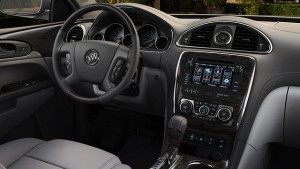 If you want AWD, the price jumps by $4,595 (the difference between the base FWD-only Convenience and the base AWD Leather trim).

It’s kinda slow for the money, very thirsty – and doesn’t pull as much as most of the others in its class.

Getting long in the tooth.

Current model is about eight years old (first year, 2008) and the ’16 will look really old when the-all new 2017 Enclave comes out.

All trims come standard with GM’s 3.6 liter V6, an engine that is used in everything from Camaros to Cadillacs (as well as Traverses and Acadias). 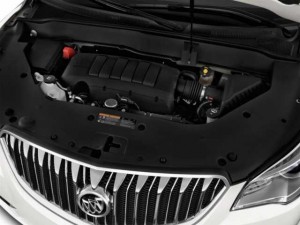 It is direct injected, has variable valve timing and – in the Buick – makes 288 hp. A six-speed automatic is standard and you have the option of FWD or (in all but the base Convenience trim) AWD.

Which explains why it’s kinda slow – and very thirsty.

This would probably be okay if the Buick were easier on gas, but it’s not. The FWD version only manages 17 city, 24 highway while the heavier AWD model’s mileage is just 16 city, 22 highway. 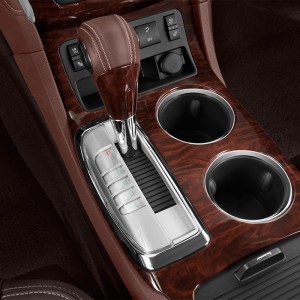 During a weeklong test drive of mixed city/highway driving, I averaged 16.7 MPG.

So does a Lincoln MKT equipped with its optional – and 365 hp – twin turbo V6.

This highlights the Enclave’s power-to-weight problem. A stronger engine would not have to work so hard to haul the thing around and so would probably use less gas than the hard-sweating 3.6 V6 does.

A weaker-than-others maximum to rating – 4,500 pounds – is another indicator of the Enclave’s under-engined issue.

Probably, GM will address this problem with the new (2017) Enclave that’ll be out in a few months. Maybe there will be a hybrid version (like the Infiniti QX60 hybrid, which tickles 30 MPG instead of flirting with teens) or a diesel engine option, as in the Audi Q7 TDI (which can pull up to 6,600 lbs. and also manages close to 30 on the highway). 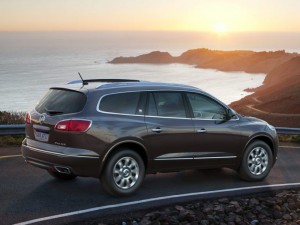 It has no ass.

That’s what one of my country friends  said after I floored it for her, to demonstrate the Buick’s passing prowess.

This $53,000 ride (as tested) accelerated about as quickly as the Toyota Corolla I was also test-driving (reviewed here) the week I had the Enclave. But the Corolla’s an economy car, with a base price just over $17k. People don’t expect much to happen when they firewall the gas pedal of a car like that … but at least you get good gas mileage out of the thing (32.3 MPG, about twice what the Buick averaged).

It’s kind of deflating, on the other hand, to be driving a $53k vehicle that cannot out-accelerate a just-over-$17k vehicle. And which drinks about twice the gas, too. 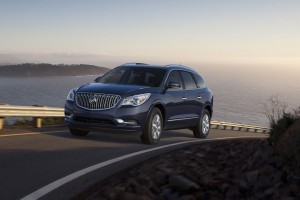 Once you get up to speed, though, the Enclave recovers its poise – which is as good or better than that of its rivals, almost all of which are tuned for “sporty” handling. Which inevitably means firmer riding.

The Enclave’s ride is super smooth – and super quiet – even though the Buick rides on 19 (or 20) inch wheels, with the short/stiff sidewall tires that go with them.  It’s obvious much thought went into suspension tuning – and sound deadening.

The latter probably accounts for a good portion of the Enclave’s bulk. 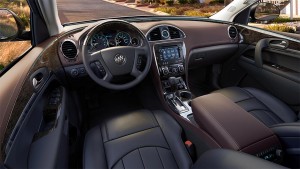 It corners with less body lean than you’d expect from a Buick. It’s not an MDX – but that’s not what Buick’s about. From an everyday driving standpoint, the Enclave’s chief weaknesses are probably its length (201.9 inches; which almost a foot longer overall than the MDX) and its 40.4 foot turning circle. These conspire to make it more challenging to deal with u-turns, curbside parallel parking and busy city traffic scenes.

In the Enclave’s defense, the Lincoln MKT is even more of a bus (207.9 inches) and has an even wider turning circle (42.4 feet). And something like the Chevy Suburban – which seats about the same number of people and only has about 5 cubic feet more total cargo capacity (I’ll get into this in greater detail shortly) is about two feet longer overall and has a three foot wider turning circle.

The Suburban is a nice rig, but it’s not easy to deal with if you actually live in Suburbia … much less urbia. 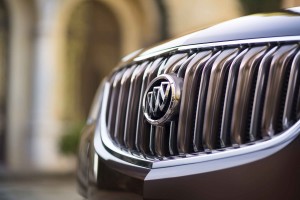 Let’s start with the Enclave’s objective charms. The thing is immensely roomy inside. Even with all three rows in place, there’s 23.3 cubic feet of cargo capacity behind the third row. Lower the second and third rows and the Enclave can house a mariachi band plus a few trays of margaritas: 115.2 cubic feet of open space.

You pretty much have to move up to a full-sized SUV (not a crossover SUV) to find more interior real estate – and then you’ll really be driving a bus. 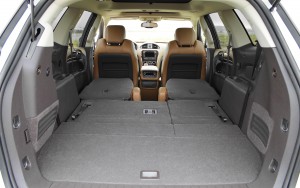 And the Buick’s third row is usable – and accessible.

Getting to the seats requires manhandling the second row forward, then clawing and crawling your way back there. Many of these “three row” crossovers would do better chucking the useless third row and opening up the space for more cargo room (see, for instance, the Ford Flex and the Lexus RX350).

The Buick is among the few that has third row seats adults can get to without pulling something – and sit on without sterilizing themselves. There is 33.2 inches of legroom – comparable to the second-row legroom in several mid-sized cars and enough to make them comfortable for even a six-footer like me. 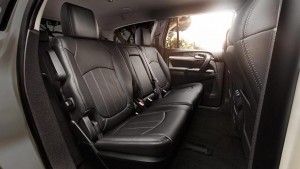 Access is simple and not only is there a footwell, there are also foot vents – so you get heat and AC directly instead of having to wait for it to make its way back there, eventually. That you get this useful third row with more useful cargo room, too, is a Buick standout that can’t be argued with.

Some things that can be argued with:

Even my $53,600 Enclave (Premium, with AWD and “the works”) came with an old-timey mechanical ignition key. Old-timey being circa 2008 – when the current Enclave came out. Yes, this review is about the 2016 – but it’s not much different than the ’08. Which had a turn-it-in-the-cylinder key, too. 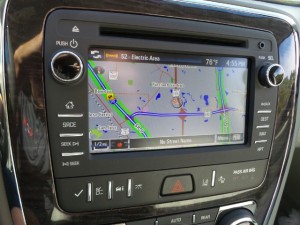 You do get an electric transmitter fob, but it does not unlock the doors automatically as you approach; you have to manually push the button. The newer stuff just opens sesame, magically.

Another item that shows the Enclave’s age is its still-attractive but entirely analog instrument cluster and its smallish-for-the-class (and price) 6.5 inch LCD touchscreen. It has the latest apps (and built-in WiFi Internet access) but it’s nothing special to look at – which it ought to be, given the price tag. To bring up the Corolla comparison again: The little Toyota has a nicer looking (and larger) LCD touchscreen. So do many other cars in the sub-$20k bracket. That is a problem – for Buick.

They ought to have brought out the 2017 this year, if you ask me. 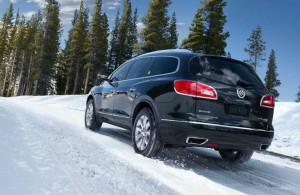 If it had been my call to make, I’d have made it possible to order the Convenience trim with AWD for another $2,000 or so (what it costs to go from a FWD Leather trim to an AWD leather trim) instead of the $4,595 kick in the soft parts it takes to move from the FWD-only Convenience to the AWD Leather. The Enclave’s primary appeals are its space – and its value. As the price goes up, its deficits – relative to newer rivals – become more apparent.

The Enclave’s biggest problem, though, is that it has to compete with the Traverse and the Acadia before it competes with models like the Acura MDX, the Lincoln MKT and so on. Can anyone explain why an Acadia Denali is justified given an Enclave Premium with the Tuscan Edition package? 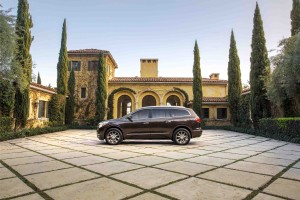 For that matter, why buy either the Buick or the GMC when you can buy the Chevy – which is almost exactly the same thing – for less?

Buick – and GMC – are anomalies. Anachronisms. They are remnants of the Alfred P. Sloan business model, which made sense when GM owned 50 percent of the U.S. car market (yes, it did). Today, that share is around 22 percent – and having three divisions selling the same vehicle rebadged and with overlapping prices is hard to grok.

On the other hand, this Buick is “nicer” than a Honda Pilot or a Mazda CX-9 … and the Convenience and Leather trims (available with AWD) are relative steals compared with the MDX (which can tickle $60k, loaded) while being at least competitively “nice.”

The old gal still has some life left in her.

But you might want to wait and see what 2017 brings.