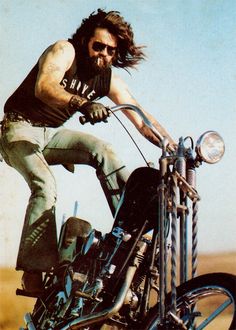 If you’re thinking about buying a bike, there’s a lot to think about.

One thing to think about is that bikes – like cars – vary in type and function.

But bikes differ more, in terms of their function, than cars do. What follows are some specific examples – and the pros (and cons) associated with these differences:

The best part about a kick-start bike is it’s fun.

Nothing like doing it right … in front of a good-looking woman, ideally.

Also, you’ll never be left hoofing it by a dead battery. Provided your leg still works, the bike ought to, too. Kick-start bikes are also simpler (no electric starter equals no need for a higher-capacity electrical system to turn the starter) and you can use the kick lever to manually rotate the engine without using any tools during tune-up time, which is handy. 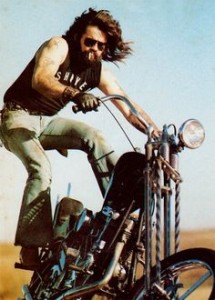 The cons: Not everyone can master the art – and even those who do know how may have trouble dealing with a big CC engine that has a lot of compression. For this reason, your choices will be limited to smaller CC, older (and less powerful) bikes.

Some older bikes have both electric and kick start – the best of both worlds!

The chief advantage of an air-cooled bike engine is  lower maintenance. An entire system – the cooling system – isn’t there. No radiator, no fan, no hoses, no thermostat. You will never have to replace these parts because they’re not there to begin with. Also – and consequently – you can usually get to the engine and better yet, you can see the engine. Air-cooled engines are usually good-looking engines, function (such as cooling fins) becoming very attractive in form.

If you keep them from overheating and don’t run them into the ground, air-cooled bikes often last for decades with little required of them except the occasional oil change and tune-up. 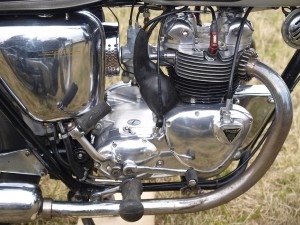 Downsides:  Air-cooled engines tend to run hotter, which made it harder for the manufactures to make them hotter, in terms of power output. Sport bikes went water-cooled for this reason in the late 1970s/early ’80s. It’s hard to make a 160 hp air-cooled engine that won’t melt itself. A radiator dissipates the heat it makes. Especially when you aren’t moving. Idling in traffic on a hot day is bad business for a high-performance air-cooled bike.

It’s also more of an engineering challenge to stabilize operating temperature within a certain range because there’s no thermostat, no fan, no coolant to do that with. Just airflow – which is to a great extent a function of how fast you’re moving. And ambient air temperature. Often, you have little control over either – and the bike’s operating temperature will vary wildly. This isn’t good for emissions control (big issue today) and it’s also a potential issue as far as long-haul reliability (which is a warranty issue).

If you get a bike with a chain, you’ll need to periodically clean, adjust and grease it. It will also (along with its sprockets) need to be replaced every so often. This is work you’ll have to do – or pay someone else to do. And either way, it’s money you’ll have to spend. 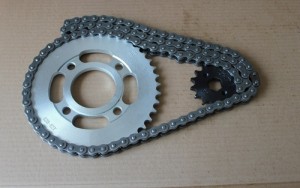 So what’s the upside? Chains and sprockets are a functional advantage in certain applications (such as high-performance sport bikes) because of the way they transfer power from the engine to the rear wheel. Under hard acceleration especially, the rear wheel has less tendency to porpoise up and down, as throttle is applied and dialed back. Chains are also pretty simple and relatively inexpensive – so if you’re looking at an otherwise solid bike that just needs a new chain (and probably sprockets, too) don’t sweat it.

Shaft drive, on the other hand, is almost zero-maintenance. There’s no periodic adjustment necessary and maintenance consists of occasionally draining the gear lube and replacing it with fresh lube. Which can usually be done in less than 10 minutes with very basic hand tools. There’s less mess (as from chain grease flying all over) and less to do. But – while shaft drives are usually very reliable – if it does break, it will be expensive to fix.

If the bike’s older, it may cost more to replace the dead shaft drive than the bike itself is worth. This is why it’s really important, when you’re considering an old bike, to make absolutely sure its shaft drive is ok before you lay down any cash. 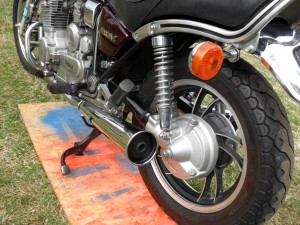 Shaft drives are usually found on touring/cruising-type bikes, where the shaft drive’s tendency to porpoise under hard acceleration/on-off throttle transitions is less of an issue. Shafties are usually very smooth when the pace is relaxed – which complements the touring/cruiser bike’s design.

If you’re new to bikes, you may not know that most bikes came with carburetors (not fuel injection) as recently as the early 2000s. Even sport bikes. Cars, in contrast, have been fuel-injected (and computer controlled) since the late 1980s. Some new bikes till have carbs, too – though fewer and fewer of them (and mostly, these are smaller CC, off-road bikes). Emissions control is the chief driver behind this change; it just took longer for Uncle to catch up to bikes.

Carbs have the advantage of not needing a computer to control them. They are mechanical devices; fuel-injection is electronic. And controlled by a computer. Carbs are more tunable – and easily tuned. But they do need to be tuned (adjusted) more often. Fuel injection usually just works. Cold starting is often (but not always) easier and throttle response is often (but not always) superior. 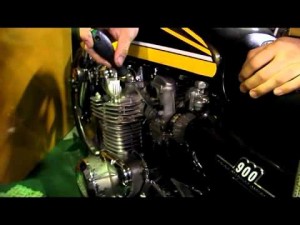 Probably the biggest negative you’ll have to deal with if you get a bike with a carburetor (carburetors, if it’s a multi-cylinder bike) is the effect of the alcohol-laced fuels you’ll be effectively forced to feed it. Modern gas formulations are designed for fuel-injected vehicles (cars) which don’t have bowls and floats and jets and rubber parts that alcohol-doped fuel likes to eat (or turn to goo). The maintenance issues that come with owning a carb’d bike (which will likely be an older bike) have become more urgent – and frequent. The carbs will need to be cleaned more often – and you’ll need to avoid leaving the bike to sit for weeks unused, which risks the build-up of gunk via weird chemical interactions between the carb’s internals and the fuel.

But, on the upside, carbs are forever. Or, almost. If you’re handy with a wrench and don’t mind the occasional tear-down and rebuild, you can keep a carb’d bike running for decades, without spending much money. A fuel-injected bike probably won’t ask for much for the first ten years or so. But after that, it may ask for a lot.

Which may be more than you’re willing (and financially able) to give it.