Four police chiefs in 10 days. 28 police officers with allegations involving a prostitute. Five police departments ensnared in controversy. Two suicides. And one teenage girl.
This is the volatile mix that has led to a sexual misconduct scandal of epic proportions in and around Oakland, California.
If that weren’t enough, it all happened while the Oakland Police Department was already under the watch of a federal monitor and compliance director.
And the scandal all began to unravel because of the words of a dead man.

An officer’s suicide, a secret revealed 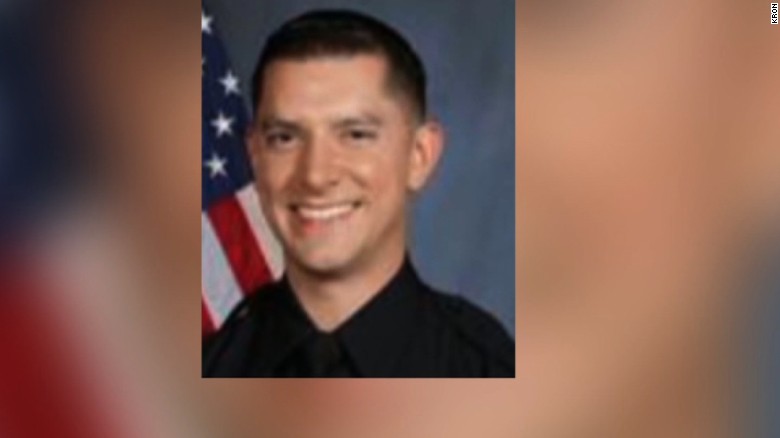 Oakland police officers showed up at the home of one of their own on September 25, 2015. Officer Brendan O’Brien’s mother called them. She came to check on her son at his Oakland apartment and arrived to a gruesome scene.
Her son was stretched out on the couch, his mouth open, his body too still to be alive, according to the coroner’s report. Investigators found him with gun still “on his right hand”, and a bullet through his mouth. The inside of his right arm emblazoned with a tattoo saying “Live Together Die Alone,” according to the coroner’s report.
There were several signs of suicide. According to a source with knowledge of the investigation, the most telling: a suicide note. In it, O’Brien spilled details of a life he thought wasn’t worth living, and an affair with a teenager.
“A couple days after he was found, I got questioned by homicide,” an 18-year-old who calls herself Celeste Guap told CNN.
Guap says she is the teenager O’Brien had been “dating.” And she think she knows why he finally took his life.
“He was really depressed and our relationship wasn’t a secret anymore and he would’ve lost his job,” Guap said.
How she met Officer Brendan O’Brien in the first place is disturbing in and of it itself. Guap says she was working the streets as a prostitute. She says she was underage at the time, which would legally make her a victim of child sex trafficking. A pimp was chasing her down a street one day in Oakland when she saw O’Brien.
“He saved me when I was 17,” Guap tells CNN in a phone conversation. “Instead of taking me to jail, we just kind of started something there, you know.”
Guap says she, underage at the time, and the officer began a sexual relationship.
The accusations are serious, scandalous, and if proven true, also criminal. Guap says she lied to investigators at first because she “didn’t want any drama,” but then they found proof in her phone.

Instead of taking me to jail, we just kind of started something there.

Investigators learned she not only had a sexual relationship with O’Brien, but other officers too. Guap says some of the officers even paid her for sex. And some paid her with information, tipping her off about prostitution stings so she could avoid them.
Guap tells CNN there were 28 officers total: Fourteen Oakland police officers, five Richmond police officers, several Alameda County Sherriff’s deputies, a Livermore police officer and a Contra Costa County Sheriff’s deputy.
Guap says she never met, but also texted sexually explicit messages to a former Oakland officer who became an inspector in the Alameda County District Attorney’s office. That is the very office that will decide whether anyone should be prosecuted related to these allegations. Guap says the officers trusted her in part because her mother and stepfather are both police dispatchers.
No one has been charged with any crime at this point. All of the cases are under investigation.
CNN attempted multiple times to obtain comment from the Oakland Police Department, but they did not make anyone available for an interview.

Another death alerts the feds to the case 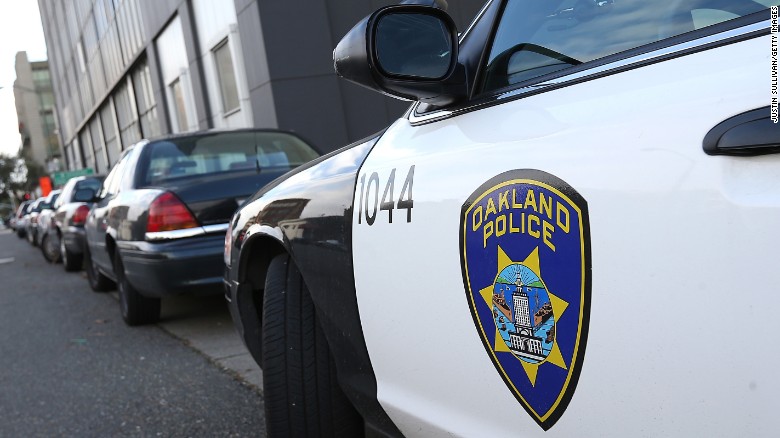 Long before Officer O’Brien took his life, he was battling rumors about another woman in his life, his wife.
A year and three months before O’Brien’s suicide, Oakland police were at his apartment investigating another death. It was June 16, 2014.
Officer Brendan O’Brien had called 911. Detectives arrived to find his wife Irma Huerta Lopez dead from a gunshot wound to the right side of her head, according to the coroner’s report.
A government official showed CNN pictures of the crime scene. It appeared Lopez had been sitting on the edge of the bed when she shot herself. Both of her feet were planted on the carpeted floor. A gun was lying near her foot on the carpet, along with a shell casing. A second casing was also found on the floor.
O’Brien told investigators he was arguing with his wife that night, according to the coroner’s report. He left to go pick up cigarettes at a nearby store. Fifteen minutes later he told them he returned to find his wife unresponsive. It was a few minutes before 10 p.m.
Irma Huerta Lopez was pronounced dead at 10:12 p.m. The autopsy report says the gun used belonged to her husband. It was O’Brien’s “off-duty firearm a Glock 45 caliber.” The death was initially deemed suspicious. The coroner’s investigative report said, “a press hold will be placed on the case because of the potential criminal investigation.”

Our whole family does not believe she took her own life.

Then the rumors started. The whispers turned into accusations by Lopez’s family that Oakland Officer O’Brien had killed his wife. To this day Lopez’s family members still believe so.
“Our whole family does not believe she took her own life,” a family member told CNN. But Oakland police and the Alameda County Sheriff’s Office Coroner’s bureau both concluded otherwise. The coroner declared Lopez’s official cause of death a suicide. But the whispers around town persisted. Then O’Brien, who had a “history of depression and post traumatic stress disorder,” according to the coroner’s investigative report, committed suicide.
A source familiar with both death investigations says when that happened, an indivdual pushed the federal monitor and compliance director to examine O’Brien’s wife’s death to ensure there was no cover up.
Compliance director Robert Warshaw began examining the death. It remained classified a suicide, but the investigation revealed something else, a source told CNN.
Warshaw did not return CNN calls for comment on this case. Court documents show the monitor did take action.
Warshaw alerted U.S. District Judge Thelton Henderson to “irregularities and potential violations” of an old “Negotiation Settlement Agreement” Oakland police were supposed to be following due to a separate case involving the department.
That agreement required the department to alert the monitor in a matter of days if there was an internal investigation going on.
But nobody notified the monitor about the sexual misconduct allegations involving Guap though they were investigating the case for six months, Oakland civil rights attorney Jim Chanin says.
“They broke the agreement,” Chanin says.
Judge Henderson ordered the federal monitor take over the latest internal investigation involving police officers on March 23, 2016, taking it out of the hands of Oakland Police Department’s Internal Affairs.
“Almost immediately, with the monitor compliance director in charge of the investigation, officers started getting walked out of the building,” Chanin says. “There were suspensions and at least two resignations.”
He says no action had been taken during the six months Oakland police handled the allegations themselves.

Oakland police: No strangers to scandal 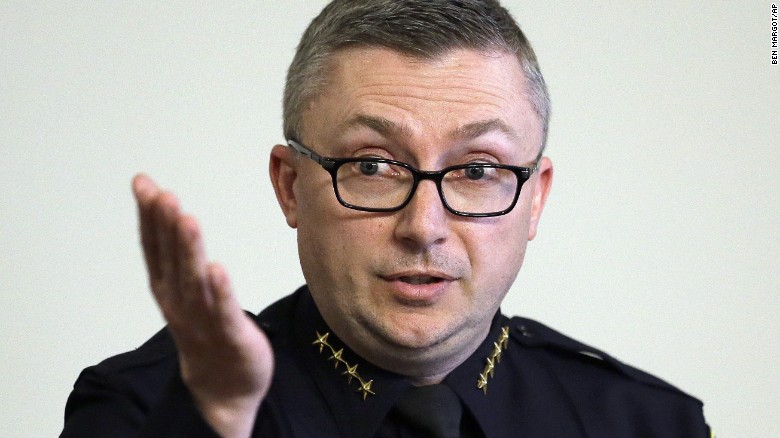 Since 2003 a federal monitor has been in place to make sure the Oakland Police Department complied with a negotiated settlement agreement stemming from a police corruption scandal.
Officers had been accused of planting evidence and beating up suspects. No accused officers were ever convicted but one officer fled prosecution and to this day is still on the run. The city paid out more than $10 million to more than 100 plaintiffs and agreed to make reforms, eventually ending up under federal monitoring.
They were almost to the finish line after 13 long years. Attorney Chanin along with attorney John Burris agreed to work with Oakland police to make sure they were complying with the settlement agreement.
Chanin says the department had been doing so well under the leadership of then Chief Sean Whent, that those involved with the monitoring, including Chanin, were about to recommend the department could run itself without federal oversight.

They fumbled at the one yard line. They were doing so, so well.

Then the sex scandal broke. Chief Whent, who had come from the department’s Internal Affairs division, suddenly resigned.
The fallout at the Oakland Police Department had just begun.
“They fumbled at the one yard line,” Chanin says, expressing shock and utter disgust with the latest accusations. “They were doing so, so well. This is a great disservice to the many good officer’s working hard every day in that department.”
Guap says she never meant to bring the department down. She points out she never went to police. The police came to her asking questions after O’Brien’s death.
“I feel guilty, but at the same time they knew they were doing something wrong too, so I can’t take the full blame,” Guap says. 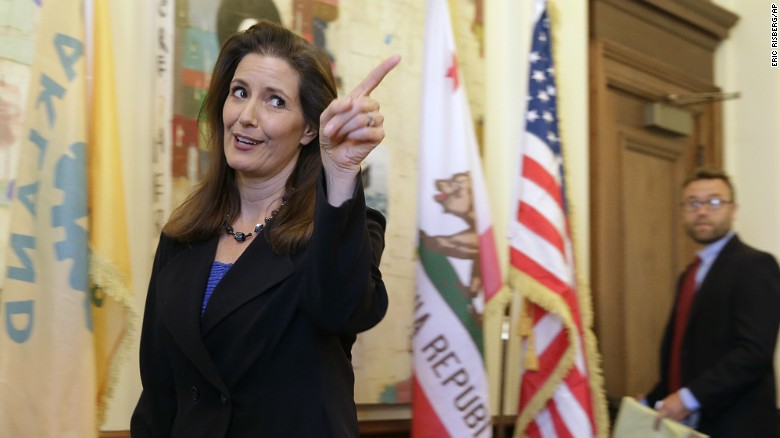 If allegations against the officers are proven true, they could lead to charges of statutory rape, solicitation of prostitution, and potentially sex trafficking, legal experts say.
CNN has reached out to the departments involved. Several Oakland police officers have been put on administrative leave and two of them have resigned in light of the sexual misconduct scandal. Contra Costa County put a deputy on administrative leave pending the investigation. Richmond police tell CNN several officers are under investigation and the investigation remains in progress. The district attorney’s office has put one of their inspectors on leave pending an investigation.
Investigations are underway in other departments. The Alameda County Sheriff’s department says they have cleared those named by Guap of any wrongdoing or unethical behavior through an independent investigation.
Oakland Mayor Libby Schaaf has put the City Administrator in charge of the department’s administration and personnel decisions. New acting Assistant Chief David Downing will oversee day-to-day operations. The federal monitor is now involved in recruitment and hiring.
Many police officers not involved in the scandals facing the department are mortified and disgusted by allegations against their coworkers.
A longtime Oakland police officer who spoke on the condition of anonymity says if the officers are found to be guilty, “they should be put underneath the jail.”

A Thank-You and Christmas Wishes!