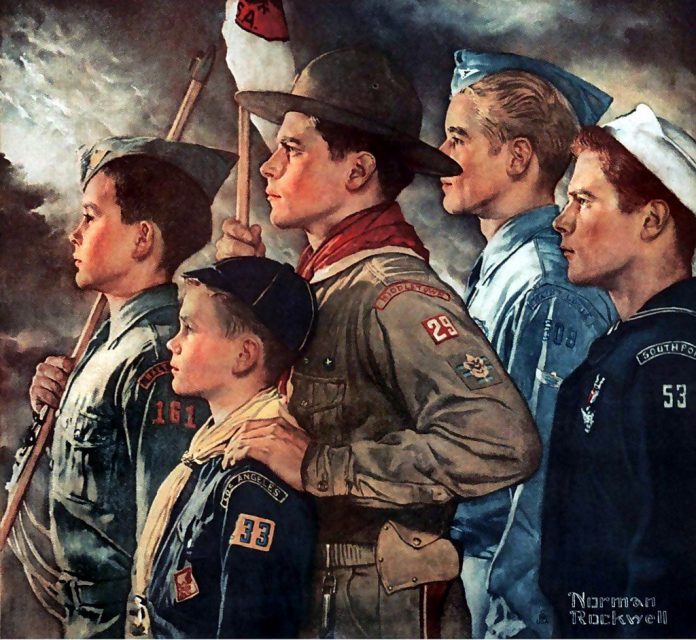 The Boy Scouts of America is – apparently – about to file for bankruptcy. This makes me happy, as a former Scout and an Eagle Scout.

Because it’s not the Boy Scouts anymore. It’s just Scouts – to reflect the new (and very one-sided) inclusiveness. Girls can be Scouts now, too – though this makes boys not want to be for the same reason that girls would probably skip Girl Scouts if boys forced themselves into the ranks, insisted the organization accommodate itself to them.

But boys never do that. It’s always the girls – who become women – who can’t abide boys (and men) having anything that’s just for boys (and men).

This goes for sports, the military – everything.

Regardless of the lack of suitability, compatibility or the problems it creates. The girls and women want in – and if you say no, they’ll use the courts to force the matter. Or, they’ll depend on the poltroonery of the Babbits in charge, who dread being perceived as anything less than “correct” and will practically writhe on the floor to demonstrate their obeisance to whatever the latest shibboleth is.

This is what happened to the no-longer Boy Scouts, which used to be a private organization. Tax-exemption was used as a pry-bar, but the real pressure to nix the Boys from Scouts came from shaming the organization, which was portrayed as exclusionary and not diverse enough because it didn’t admit girls – either as kids or adult leaders.

Which it did for a variety of eminently sound reasons, not the least of which was the problems that tend to occur when you place a teenage boy and a teenage girl in a tent together, out in the woods. The parents of both tend to worry about such things. Plus it distracts the boys from learning how to build a fire without matches, use a compass in the woods – which used to the point of the thing.

But in general, no.

By forcing girls into the Scouts, the Scouts are forced to dumb-down things like three-day hikes on the Appalachian Trail – for the sake of the girls, who also have other issues that become problems without access to showers and such after a few days in the woods.

But even those problems aren’t the real issue.

Which is, simply, that boys – like men – need “guy time.” That is to say, time away from women – and girls, too. Because the sexes are different, and not just physiologically.

Boys and men want and need to be free to talk the way that boys and men do when there aren’t any women (or girls) around. Exactly the way that girls – and women – like to talk among themselves – usually about men and boys.

Men and boys take no umbrage as this is natural. Men and boys are fine with girls and women having Girls Nights, their coffee klatches, even their own female-exclusive organizations.

There is no shaming effort under way to force that outfit to admit boys. The boys don’t care – and neither do their fathers. It is understood that it’s good for girls to spend time away from the pressure of boys.

Yet women – and girls – can’t stand it when boys and men go off on their own, whether it’s the Boy Scouts or a men’s-only cigar club. They regard it as a conspiracy against them. They will complain, shame – and litigate. Freedom of association – which includes the freedom to not associate – seems to be a concept not merely foreign to their thinking but an outrage which must be stomped at all costs.

Except, of course, when it comes to themselves.

So I say that perhaps the Boy Scouts should just close up shop and call it a day. Whatever this Scouts thing is, it’s not the same thing and arguably a bad thing. It’s certainly not the thing I had the good fortune to experience some 30 years ago, when I was a boy and Boy Scouts learned to shoot (riflery merit badge) did mile swims and three-day death marches on the Appalachian trail, with a crusty old Scoutmaster who helped us learn how to be men, in the absence of women.