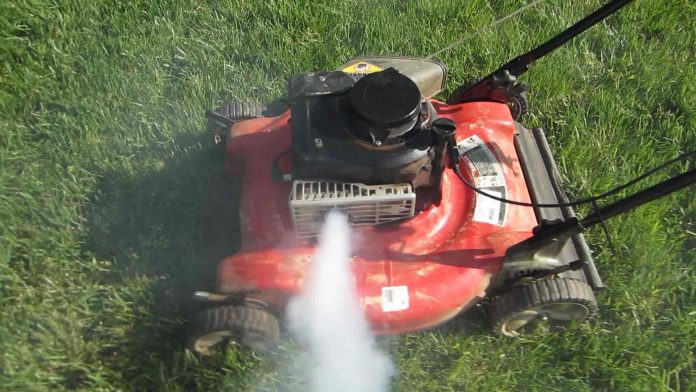 Most cars only need their oil changed after many thousands of miles of driving. My lawn mower gets its oil changed every time I “drive” – actually, push – it.

It burns almost exactly as much oil as gas – which is wonderfully convenient. When it runs out of fuel, I know it’s time to add oil. Usually the full quart – the little loose-ringed beast’s total capacity.

I am at a perfect Yin-Yang balance point. 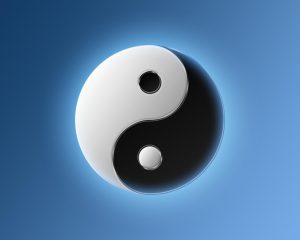 If it used any more oil than gas, it would probably run out of oil before it ran out of gas – which would lead very quickly to no more mowing. At least, not with this mower. And if it burned any less oil, I’d have to be more thoughtful – and remember to check the dipstick more often – to avoid the same engine-seized outcome.

Also, the oil is always fresh. It doesn’t have time to get dirty.

Amazingly, it does not visibly smoke.

One of my other oil-burners – this one on purpose – trails blue haze. It is blatant about its assault upon the environment. This is my ’75 Kawasaki two-stroke “triple” (three cylinder), a neat old bike of a type that no one makes anymore – precisely because of its audacious – and deliberate – indifference to air quality.

It has an oil injection system rather than worn out rings. Still, it uses considerably less oil than my push mower – which has only one (very tired) cylinder.

I generally only need to add a quart to the Kawasaki’s tank once every few hundred miles.

The truly amazing thing about my mower, though, is that it runs at all. That there is still compression sufficient for combustion. That it makes enough power to turn the blade that cuts the grass. Briggs & Stratton makes one hell of an engine. 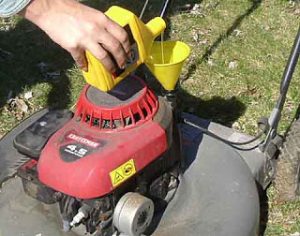 It runs reliably, too – so long as I keep the oil topped off in time with it going down.

The time will, of course, inevitably come when the oil-burning Yin outpaces the gas-burning Yang . . . for the same reason that running on a knee with worn cartilage will inevitably lead to no cartilage.

And then no more running.

I will keep on mowing – because it has to get done  – perhaps unaware of the gradual shift in balance occurring within; that while there’s still gas in the tank, there’s no more oil in the poor thing’s sump. But there will be warning. The pitch of the engine will begin to change as the lubrication dries up. These are the these sounds of mechanical distress; of friction and heat increasing.

The fusion of piston to cylinder – a marriage not made in heaven. That defeating feeling which attends pulling the rope and meeting new resistance.

Or, perhaps, The End will be heralded by a hole punched through the side of the engine case as the reciprocating assembly locks up mid-stoke. This is the engine committing seppuku.

And it has happened to me before – my just reward for abuse of machinery. No one who appreciates all that internal combustion has done to lift our burdens should ever allow this to occur.

Besides which, this is a life worth saving – because this old push-mower is largely free of the saaaaaaaaaaaaaaaaaaaaaaaaafety “features” which have made starting and using a new lawn mower the toughest – the most insufferable – part about mowing the yard. 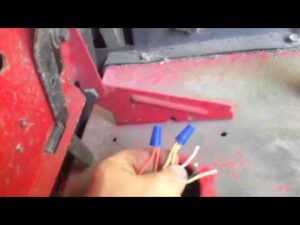 The one such “feature” it had I disabled the day after I brought it home, years ago, new from the store.

This being the “feature” that automatically kills the engine if the pushee isn’t grasping a flex handle thing which spring releases when he takes his hands off the main handle. It is idiot-proofing meant to keep idiots from putting their hands under the deck of the running mower. But it makes it impossible to adjust the engine of the running mower – something non-idiots sometimes need to do – and also makes it necessary to pull the damned rope again to restart an engine you didn’t want to stop because all you wanted to do was pause for a moment to grab a sip from the garden hose.

My ancient mower is mostly made of metal, too – not plastic. So it can be welded and otherwise fixed rather than thrown away. 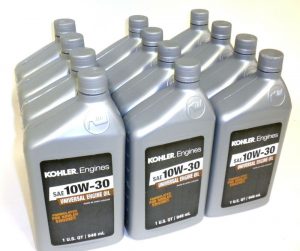 A quart of oil once a week is about $4 (no need to burn the good stuff) while a new mower – saddled with all the saaaaaaaaaaaaaaaaaaaaaaafety stuff – costs easily $200 and probably more.

I can cut the grass all summer for about $64 in oil ($4 per week for about four months out of the year, give or take).

Of course, the smart thing to do would be to re-ring the thing, which would eliminate the need to “change” the oil once a week.

I probably ought to look into that.

An Aspect of the Con