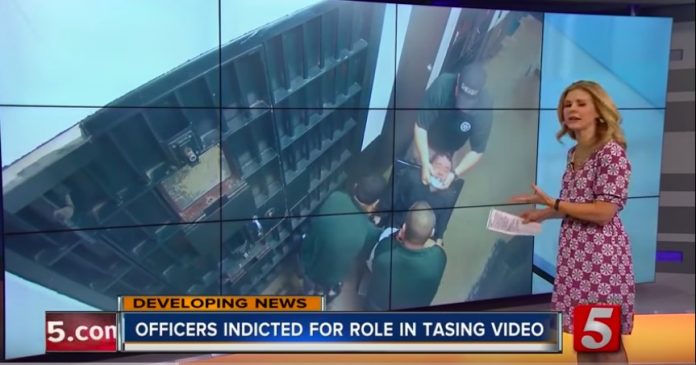 Armed government workers in Tennessee who were caught on video torturing a kid in a “restrain chair” – and were charged with multiple crimes – appear to have gotten away with it. A mistrial has been declared but one of the AGWs, “corporal” Mark Bryant, is headed back to court to be tried again.

Back in 2018, Bryant was charged with multiple counts of Excessive Force Under the Color of Law and two counts of Destruction, Alteration or Falsification of Records in Federal Investigations. The other armed government worker, “Sergeant” Gary Ola has also charged with two counts of making false statements to federal investigators for lying to them in August of 2017 and again in May of 2018.

In September 2018, Ola accepted a plea agreement for two counts of making false statements to FBI agents in connection with the incident. He has yet to be sentenced.

The victim of this attack – 18-year-old Jordan Norris – began in November 2016, when a SWAT team raided his home because he was allegedly selling arbitrarily illegal “drugs.”

After Norris was arrested, he began banging his head against the cell door. To instill some respect for their Authority, AGWs dragged him out of his cell and strapped him into a restraint chair.

The AGWs can be seen holding Norris down with a gag while Bryant sadistically and repeatedly Tasers the kid – at one point shocking Norris for nearly half a minute.

“Are you ready?” Bryant asked Norris?

“Stop resisting!” one of the AGWs screams at Norris, who was strapped into restraints.

“You don’t like it, do you?” another AGW can be herd saying.

At one part in the video, you can hear Bryant tell Norris, “I’ll keep doing that until I run out of batteries.”

Norris said he remembered deputies asking him, “Do you want me to do it again? We got a whole bunch of batteries we can drain into you pretty much. We will do it over and over until we have no more.”

For three hours Norris remained in the chair.

When Norris was eventually released, he was covered in burn marks from the Taser. Tony Chapman, Norris’ stepfather, said he gave AGWs the benefit of the doubt when he saw his stepson’s wounds. He thought Norris must’ve been resisting in some way. However, once he saw the video, it was entirely clear that Norris was in no way resisting — as he was buckled down in a restraint chair.

“I said, ‘Jordan what is that?’ It looked like he had the measles. And he said, ‘That’s where they Tased me.’ I could not wrap my head around that,” William Chapman said.

Chapman told News Channel 5 at the time that he counted more than forty burns.

Norris eventually received a taxpayer-financed settlement after filing an excessive force lawsuit against the department.

“The lawsuit alleged that the deputies used excessive force in repeatedly tasing Jordan while he was restrained in a restraint chair after experiencing a mental health episode,” Norris’s attorneys Ben Raybin and David Weissman said in a press release on their website. “The terms of the settlement are confidential.”

The settlement involved only the civil lawsuit and had no bearing on criminal charges against Bryant, the release stated.

“It is troubling that nothing was done in the eight months before this case was reported in the media, but Jordan is satisfied that his lawsuit prompted action to be taken against Deputy Bryant. Most importantly, the Sheriff has stated that steps are being taken within the jail to help ensure this never happens again,” Raybin said at that time.