Are people innumerate? Or indifferent?

Perhaps, they’re just lazy. Or – worse – industriously eager to demonstrate their virtue (really, the virtue they’re told to demonstrate) by waking around with their mouths Diapered, pretending to be diseased and treating others as diseased.

It is of a piece with the story of The Emperor’s New Clothes – which probably isn’t told to kids anymore because of the lesson it imparts about the dangers of pretending to see what isn’t there because the people all around you say they see it.

Of course, you can’t see a virus.

But you can see numbers. If, that is, you’re willing to look at them. This takes more effort, of course, than listening to Anderson Cooper. Which is apparently too much effort for lots of people, who – apparently – would rather “see” what practically everyone else seems to  “see”- which is lots of “cases” of the WuFlu.

Never mind the decrease in people dying of it.

The “cases” being reported go up almost hourly – replacing the no-longer-effective body count being reported (because there weren’t enough bodies to count). This increase in “cases” is taken as ominous but almost no one bothers to ask whether  more – or fewer – bodies are stacking up like cordwood on account of it.

Twenty guesses as to the answer.

But instead of the right answer – the death rate is going down as the number of “cases” goes up – and asking themselves what that implies (an even lower risk of dying than the already-known practically nonexistent risk) they behave as though the peril increases.

More people are Diapered now – willingly – than three months ago, when Diapering wasn’t pathological because, at that time, the mortality rate wasn’t known and it was possible to be reasonably worried about dying from WuFlu.

It no longer is. Mental illness drives Diapering now. 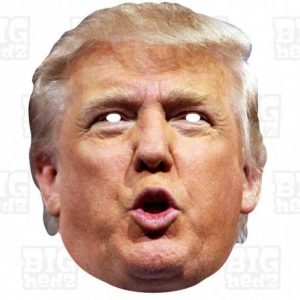 Masochism as well as sadism. Do these people like public humiliation rituals? How else would you describe putting on a Face Diaper when there’s no reason to do so other than to humiliate yourself by publicly displaying your neurosis or your laziness?

There is without question something to the latter thing. Note that Diapering isn’t merely a personally chosen humiliation ritual; the pantomime of the neurotic. The humiliators are insisting on the humiliation of everyone.

See, for recent example, the pathetic bending of the knee (and donning of the Diaper) performed by Oregon armed government workers the other day. They “got caught” –  note the morally inverse language – refusing to Diaper because they’re medically and mentally healthy, at least as regards this sickness – ergo no reason to don the Diaper.

But the Diaperer-in-Chief of the state – Kate Brown – could not “allow” (there, again) this act of healthy divergence from sickness psychosis, the image of which must be maintained by forcing everyone to pretend they are sick or living in terror of sickness – for reasons of the health of the state, which by now should be clearer than a freight train coming at you down the tracks.

Rather than stand their ground – even if it meant quitting their jobs – these Potemkin “heroes” caved in and performed the required Kabuki.

Just the right word. It’s a show. A Dark Carnival of complicity with insanity. Do people not understand that they are enabling the creation of permanent insanity by accepting this insanity? 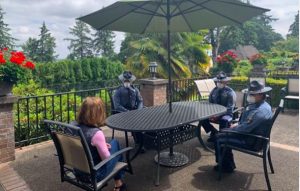 A world turn’d upside down? In which the physically and mentally healthy are forced to pretend they believe that death is in the air, everywhere? To ignore the objective facts that prove it’s not? To suffer the psychological abuse of being made to agree that two-plus-two-equals five?

That the emperor’s new clothes are the very finest they’ve ever seen?

Which brings up – inevitably – the Orange Man because – ultimately – all hope (if there is any) depends on him. The next emperor will most definitely insist that everyone “see” his new clothes – by wearing their new clothes.

On their faces. To show their obedience. Their willful suppression of objective reality in the face of socially pressured insanity.

Why hasn’t the Orange Man questioned this? Ridiculed the insanity?

Why no parsing of the numbers – which aren’t political numbers. They are just numbers and they speak for themselves, res ipsa loquitur.

The number of “cases” – vs. the number of deaders. And let the percentages speak about the insanity of the Diapers. One press conference is all it would take to point out that the emperor has no clothes.

Instead, peripheral jibber-jabber about monuments, something of monumental irrelevance at this moment in time. Whether a statue stands or falls is of no consequence in the face of whether reality – and sanity – stands or falls.

Along with the Orange Man himself.