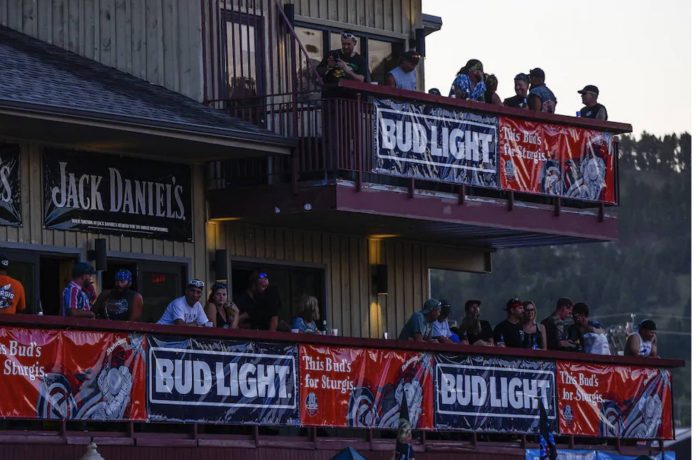 There’s an old joke that used to be funny about the shyster lawyer who asks the defendant, “And when did you stop beating your wife”? It was funny because everyone understood (because people could think, once) that the lawyer was a shyster . . . because the poor man hadn’t ever beaten his wife.

It’s not funny anymore because millions of people can’t think anymore; do not see that they are being shystered by the Gesundheitsfuhrers and the Hyena Media when it comes to assertions about the WuFlu.

The latest such follow on the heels of the annual Sturgis Motorcycle Rally in South Dakota, where hundreds of thousands of Americans didn’t imitate Michael Jackson. Didn’t wear gloves or Face Diapers; didn’t leap back in fear of proximity; they slapped backs and had fun – face to face. 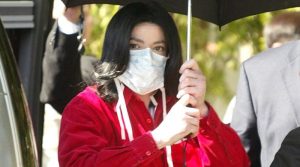 In your face to the Gesundheitsfuhrers who have been turning America into a depressing and tyrannical sickness gulag by spreading fear about a sickness that presents no more threat  to 99.5-plus percent of the public than the ordinary flu and less of a threat to 100 percent of the population than medical malpractice (which is credited with about 250,000 needless deaths each year) or obesity (millions) .

A fact – not an assertion.

Who feel rather than think – and seem to like feeling afraid (a subject for another column).

The assertions are sicced on the public by the Hyena Media, unleashed by the Gesundheitsfuhers who control it because it is owned by them. Also a fact rather than an assertion. About half a dozen vast cartels – including, very relevantly, the pharmaceutical cartel – have financial control over the Hyena Media whether by outright ownership or ownership by proxy via advertising support – which can be withheld and which has the same motivational effect as the withholding of food from a Hyena.

At any rate, the assertions erupt about what hasn’t happened – but might! – because hundreds of thousands of people gathered at Sturgis, South Dakota and did not pretend to be Michael Jackson.

No one has died because they got the WuFlu – rebranded “COVID-19” to make it sound like the threat it isn’t. 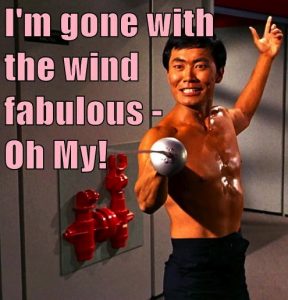 But – oh, my! – a person who visited a bar called One-Eyed Jack’s “could have transmitted the virus to others,” barks one of the Hyenas, who works at the Gesundheitsfuhrer organ called The Washington Post.

It is headquartered in a city where the entire city Diapers because the Gesundheitsfuhrers have ordered them to and because the Hyena Media has terrorized them into believing they must else they are all going to die (in spite of the medical and existential fact that almost none actually will and that wearing a disposable Face Diaper or a dirty old rag is immaterial regardless – which it says right there on the box, another fact).

The Hyena – a she Hyena named Hannah Rowan – goes on to reluctantly concede that “Four days after the event finished (South Dakota officials) said they are aware of fewer than 25 infections among the people who attended” the rally.

You can almost see her crocodile tears.

No mention of the fact that not one has died or even been “intubated” – the latter being one of the common primal screams of the people so ruined by the fear peddled by the Hyenas that they actually wish death on people who are healthy and refuse to pretend everyone is sick, much less about to die.

Well, facts they don’t want known – and which are therefore drowned into intellectual oblivion by the Hyenas so as to maintain the puissance of the Gesundheitsfuhrers. Who know this may well be their Hail Mary pass given that previous assertions about “climate change” and other imminent dooms never managed to get the traction this assertion has. 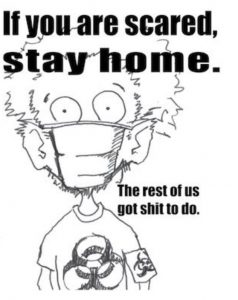 Which is why any slippage must be counteracted forcefully . . . with the wildest assertions confectable, including those about the cases! the cases! which was rushed onto the field when the crippled quarterback – the dead! the dead! – could no longer “play.”

The dead being, again, facts. Actual bodies – things that can be counted. More precisely, things harder to count falsely.

Countered by assertions – hysterically presented in defiance of them.

Keep people terrified and you can do just that to many of them – with their frantic cooperation and their sadistic insistence that others be ruled as they are ruled. Thus the Diapered siccing the Gesundheitsfuhrers on the Undiapered as well as those who allow the Undiapered into shops and restaurants.

If facts mattered – and if it was a fact that a pathetic disposable piece of cloth or a filthy old bandana “kept them safe” – the Diapered, that is – then they would not care whether others didn’t put on the piece of either cloth.

But they do care – very much – because it assuages their fears, weaponized by the Gesundheitsfuhrers and maintained by the Hyena Media. Which is now focused on hystericizing not just Sturgis but South Dakota generally and specifically its non-Gesundheitsfuhrer governor, Kristi Noem – who hasn’t locked down the people of her state nor decreed that they must wear the flimsy piece of cloth or the dirty old bandana, so as to create the impression of general Sickness Psychosis. 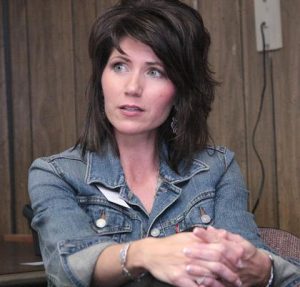 Which doesn’t exist in South Dakota precisely because you don’t see people pretending it does.

You could see that he wasn’t quite right.

The Gesundheitsfuhrers want to make it appear that everyone isn’t quite right – by using the media to browbeat the populace into thinking that appearing like Michael Jackson is normal. In order to rush in the new “normal” of endless fear based on endless assertions, with facts suppressed in the manner of heliocentrism in the days of Ptolemy.

The “full impact may never be known,” writes the She-Hyena. Indeed. Exactly.