If Face Diapers work, why is Joe Biden worried about being in the same room with an Undiapered Don?

Another rational question that will never be answered by the irrational, for whom the Face Diaper has become a kind of psychological security blanket. It makes them feel better. The fact that it doesn’t do anything – medically – is beside the point.

Some of the original impetus to impose general Diapering rested on this point. It was argued by some that it was mean-spirited to leave Diapering to the psychologically debilitated as this made them feel worse. In addition to dealing with their own neurosis, they had to deal with the public display of their neurosis. No one likes to have their issues on display.

There was also the factor of the political divide. While it’s not axiomatic, it is probably true that most of the willing Diapered are Democrats – hysterical liberal Democrats – who made a political statement by Diapering.

Whether Orange Man is good is beside the point. The deranged hatred of the man and its corollary – anything to get rid of him – is the relevant point. WuFlu hysteria serves exactly that purpose, or so it is hoped. Where Putin’s Poodle, Shady Ukrainians and Non-Impeachment failed, Diapering – and the attendant destruction of what had been a strong economy as well as a resurgence of what had been strong nationalism – might just succeed.

And the same politics.

It spreads misery – which can be blamed on the Orange Man.

This is not a paean to the Orange Man but an observation about those who despise him. These are people – need it be said? – who would kill everyone – or at least, kill their livelihoods, which amounts to the same – in order to be rid of the Orange Man. Such people excel at the use of gaslighting to get their way.

But if Joe was so worried why didn’t he wear his Diaper at the debate? And if he didn’t get sick, then why did it matter that OM didn’t? Why would it matter again? Joe can don his Diaper and be perfectly safe, yes?

No. That would derail the narrative train. Thus the Orange Man will be expected to Diaper even though Joe could defensively Diaper . . . assuming the Diaper provides any defense.

Which of course, it does not. It says so – right on the box.

But the deeper point is that country – the ill parts of it – have been triggered by the news that the president caught a cold. He was mildly sick, we are  told, for a few days. Not even bed sick. That this has become news – front page news – is itself news. About the state of mind of the American volk.

A large portion of which has lost its mind.

A volk reduced to this state of paralytic fear over an asserted threat that is actually almost no real threat – even to an obese 74-year-old – is a volk that deserves to be gesundheitsfuhrer’d.

It is literally the bogeyman – except it’s not kids and it’s not tuck-in time.

Aber, there is some good news to report.

Face Diapering is becoming less general. The pressure to Diaper is waning, just a little bit – in my area, at least. I can report with a glad heart that the last couple of times I’ve gone shopping at Kroger – one of the big chain stores that colluded with other big chain stores a couple of months back to decree Diapering within the stores of all the chains, thereby making a de facto National Diaper Mandate – there were faces visible again.

Not many – only about three or four other faces – but that is a lot more faces than none, which were all Diapered as recently as before about two weeks ago. There are also fewer signs to Diaper. 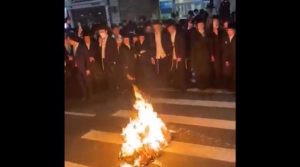 About a month ago, you had to walk by huge billboard signs near the entrance that “local ordinance” required a Diaper to enter. There was also a Diaper Dispenser within the door. It took some nerve – in actuality, a slight upwelling of contumaciousness, which all too many Americans lack  – to walk past the signs and the teenage kid extending the Diaper, Undiapered.

If you could manage this, you could shop while showing your face.

Most people couldn’t manage it – as evidenced by their Diapered faces.

Which created a feedback lop of compliance. Since most people Diapered, not Diapering made you a sore thumb that stood out and that has much more psychological power over many people than “ordinances” do. Thus Diapering served as a real-life experiment to see just how much most people could be made to do by pressuring them to do it.

It has been a very successful experiment.

But, like the fear of other Bogeymen since retired – ululating jihadis, for instance – this bogeyman is losing his punching power, too. People grow weary of the Diapering regime. Maybe they’ve read the box. Maybe they’re just sick of being made to play-pretend sickness. Maybe because the big scary signs – and Diaper Dispensers – are gone.

Whatever the underlying etiology, the Diapers are coming off. In New York, they are burning them in the street.

It takes a while to slow down a run-away freight train. It may seem the thing is picking up speed, even as the manual handle is desperately heaved back and the sparks fly but the motion continues, apparently unabated – with a bridge up ahead that’s not yet been repaired. But then you notice the trees outside the window aren’t as blurred; there is a gradual sense of slackening.

This is happening all over the country.

In PA and Ohio and other states, where the Gesundheitsfuhrers have been or are in the process of having their assertions of unlimited power, endlessly asserted questioned. In poll after poll indicating that a solid majority will not accept Needling.

And in growing Diaper noncompliance, which is a kind of visual assertion of uneasiness about Needling and sickness of play-pretending that sickness abounds when it doesn’t.

It may soon become abnormal once again to hide it behind a “mask.”