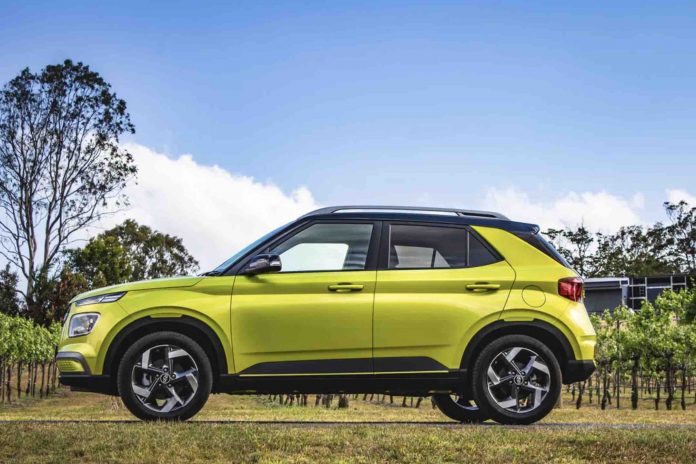 Really small crossovers are the new in thing – chiefly because bigger things can come inside taller packages.

The new Hyundai Venue, for instance, is nearly a foot shorter than Hyundai’s smallest sedan, the Accent – yet it can carry more than twice as much stuff because of its shape.

Stubby – but tall – makes all the difference.

The extra space makes this very small crossover family-feasible while a small sedan like the Accent – with its larger footprint but lower roofline and tiny trunk – is much less so. This probably explains why small sedans aren’t selling very well while these tiny-but-tall crossovers can’t be stamped out fast enough to keep pace with demand.

The Venue is Hyundai’s new extra-small crossover wagon, a notch down from the compact-sized Kona and everything else on the road that still has four doors.
It doesn’t offer all-wheel-drive – so it’s not really a crossover SUV – but it does come standard with the lowest price in the class: $18,750 to start for the base SE trim  . . .

If you don’t count its slightly less expensive corporate cousin, the $17,490 to start Kia Soul.

When the Venue came out last year as a new-for-2020 model, it had an even lower price tag – just $17,530 – because it was available with a six-speed manual transmission, so you could skip paying extra for the optional automatic transmission. 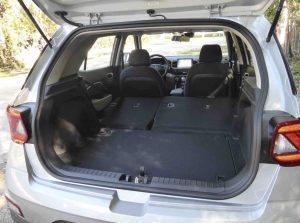 Smaller price vs. other small crossovers.

Hand-sized controls instead of finger-swipe inputs. 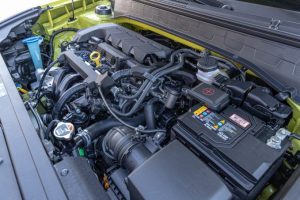 Every Venue comes standard with a 1.6 liter four cylinder engine paired with a continuously variable (CVT) automatic transmission and front-wheel-drive only.

Some of the Venue’s pint-sized rivals – including the Ford EcoSport – offer it. But to get it, you also have to pay more – and not just for the EcoSport, which stickers for $19,995 to start. To get the optional AWD you have to buy the EcoSport’s optional engine, which pushes the MSRP of the EcoSport to almost $22k to start – as much as the top-of-the-line Venue Denim.

Other models in the segment like the Nissan Kicks – and the Kia Soul – are also FWD only.

Happily, the Venue’s little engine isn’t turbocharged – an increasingly rare thing as engines get smaller in practically everything. 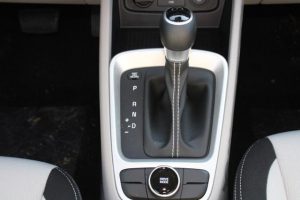 Adding a turbo makes up for the smallness in size – by adding boost – but it also adds to the cost of the vehicle. A good example of this is the Ford EcoSport – which comes standard with an even smaller 1 liter, three-cylinder engine equipped with a turbo to make up for it – just barely. The little Ford’s little engine manages 123 hp – all of two more than the Venue’s 121 hp.

And the EcoSport costs about $1,000 more to start.

There is also the potential for more cost over the life of the turbo’d engine.

The Venue’s engine’s simpler layout – and the fact that it’s not pressurized – reduces the probability of some expensive thing going wrong at some point down the road. 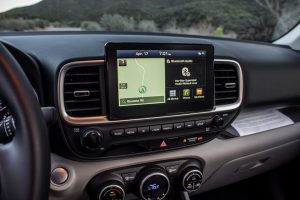 It’s also enough to get the littlest Hyundai to 60 in 8.8 seconds  – quicker than both the Kicks and the EcoSport, which need about ten seconds to make the trip.

The downside is the 1.6 liter engine only summons 121 horsepower – which is just enough but not more than enough.

Which – along with keeping the price low – is probably why the Venue is not offered with AWD. Even though it is a relative lightweight – 2,612 lbs. – the additional weight of AWD would need additional horsepower to compensate.

Another likely contributing factor is that adding AWD would reduce the Venue’s fuel economy a little bit – and these days, that’s a lot as far as complying with federal fuel economy fatwas. A difference of even 1-2 MPG (the usual spread between a FWD and AWD version of the same vehicle) may not seem like much – and it isn’t much, to the buyer –  but it’s a big deal in terms of calculating “fleet averages” and the fines levied for non-compliance with the mandatory mileage minimums (currently just over 35 MPG on average).

Which brings up something interesting.

Last year’s Venue with the six-speed manual transmission had an EPA rating of 27 city, 35 highway. The automatic-only 2021 version rates 30 city, 33 highway. This works out to an average difference of .5 MPG – in favor of the CVT automatic-equipped Venue. 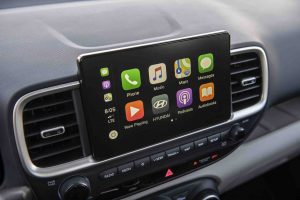 It’s doubtful you’ll make back the $1,040 additional you’ll pay up front for the automatic-only 2021 in down-the-road “fuel savings.”

But it’ll help Hyundai comply with the federal MPG fatwa (CAFE). And that’s why the manual’s no more.

Another interesting thing ties into this fuel efficiency thing.

The Hyundai Accent sedan – with the same 1.6 liter engine and the same CVT automatic – rates 33 city and 41 on the highway. That’s a big difference – 8 MPG’s difference on the highway – and notwithstanding that the subcompact Accent is also very small and very light.

But there’s a big aerodynamic difference. The sedan is so more efficient on the highway because of less wind resistance at highway speeds.

The Accent’s shape – lower and longer – is more efficient.

Ironically, the same government policies that have downsized cars – in order to make them more “efficient” – has pushed people into less-efficient crossovers, which have the family-viable space that today’s downsized small cars lack. 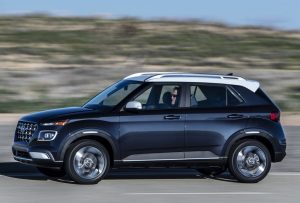 This Hyundai will blow the doors off a hybrid like the Prius – which is what you’d need to go farther on a gallon of gas (without getting a small sedan like the Accent).

A fun way to appreciate how much we take for granted in terms of both speed – and economy – is to compare the Venue with a late-70s/early ’80s V8 muscle car like say a 1980 Trans Am. Equipped with a 4.9 liter turbocharged V8, the ’80 needed about the same 8.8 seconds to achieve 60 – and drank more than twice the gas to get there.

Still, it’s a shame about the RIP’d six-speed manual, which made the getting-there a lot more fun last year. But the Venue loses no points this year because there’s no alternative. 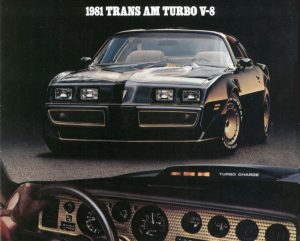 All the others in the class are also automatic-only.

Besides which, the main draw here isn’t driving so much as parking.

This makes it especially handy in city situations, where parking is often hard to come by and larger vehicles often have to pass by spots they can’t fit into. 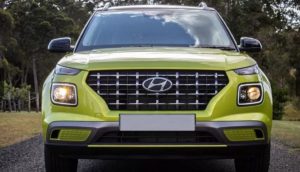 And small as it is, it doesn’t seem so from behind the wheel because of the fairly broad and flat hood. The abbreviated dimensions are expressed behind you. The end of the Venue begins just aft of the rear doors, in a kind of reversal of the old cab-forward layout that was popular back in the ’60s. This also makes reversing into parking spots an exercise in easiness – without reliance on the back-up camera. With the Venue’s bumper almost right behind you, it’s hard to bump into anything – unless you meant to.

Inside the Venue, there are other driver “assists,” too – though not in the form of electronics. They include unusually large rotary knobs for the AC, heat and fan control, which makes it easy to control these functions while you’re driving and without looking. Ditto the also-rotary-knob controls for channel changing and volume control. You can make fin adjustments by feel – rather than by swipe of tap. 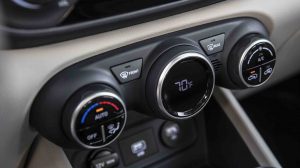 Such controls arguably make electronic “assists” like Lane Keep Assist and Automatic Emergency Braking unnecessary since the driver isn’t constantly looking at a touchscreen as opposed to the road.

Which, incidentally, you can also see better because of the Venue’s proportionately large (and tall) windshield and its not-short, not-radically tapered side glass.

Will it go in the snow? That depends on whether you can drive.

It’s helpful, yes – but it isn’t essential to getting going when there’s snow on the road. What is essential is knowing how to maintain momentum – and thus, grip. If you know how to do that, the Venue will get you to your Venue in anything short of a blizzard – without paying extra for AWD.

Finally: I am pleased to relay this this little Hyundai returned better-than-advertised mileage. During my weeklong test-drive, it averaged 34.6 MPG. 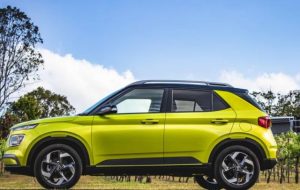 The Venue is conservatively styled – a counterpoint to the funkily styled Kia Soul, which isn’t for everyone. It looks like what it is as opposed to leaving you to guess what they were thinking.

In addition to the sensible controls for necessary functions, you will also find the necessary space that’s lacking in small cars.

Though it’s about a foot longer, Hyundai’s smallest sedan – the Accent – only has room in its trunk for 13.7 cubic feet of stuff. The barely 13-foot-long Venue has 18.7 cubic feet of room behind its back seats and if you fold down the seat backs, the available cargo space opens up to 31.9 cubic feet – which is more room for cargo than in the trunk of even a full-sized sedan that’s twice as long as the Venue. 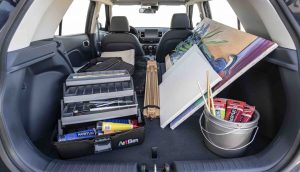 As well twice as expensive.

Which is why sedans are fading away.

The affordable ones like the Accent are too small to more than commuter cars while the larger ones are too expensive to be family cars.

The downside here is that people are being nudged into these small crossovers – which cost more than small cars – in lieu of the no-longer-available (or no longer affordable) family-sized cars that government regs have pushed off the market.

Given the Venue’s abbreviated length, you’d expect legroom for the backseat passengers to also be abbreviated but the 34.3 inches you’ll find back there is more than you’ll find in the back seats of the Nissan Kicks (33.2 inches) which is probably the Venue’s most direct competition.

The Ford EcoSport has more backseat legroom (36.7 inches) but you pay a lot more to get it. 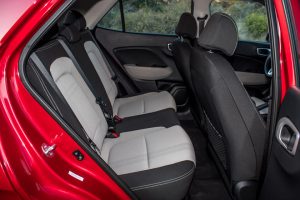 But the catch is the Soul’s oddball looks – which aren’t for everyone. It’s also about six inches longer. Not a huge difference – but a difference enough to make it not fit into spots that the Venue can fit into.

The Venue is practical in subtle ways, too.

It comes standard with 15 inch steel wheels and a real spare wheel – not an inflator kit – hidden under a cover in the cargo area. Steel is sturdier than aluminum and having an actual spare wheel – and tire – means that you won’t have to call for a tow truck if you damage a wheel – or puncture a sidewall (Inflator kits can’t fix them).

Fifteen-inch tires cost also less than 16 or 17 inch tires. They usually ride better, too – because they have taller sidewalls. 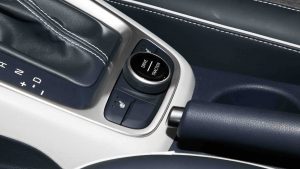 Also, the Venue comes standard with things that cost extra in the nominally less expensive Soul – such as roof racks and an 8-inch LCD display.

This little wagon also comes standard with a 12V power point – which for some reason many new cars don’t even offer anymore. Apparently because most devices use USB-style power points. But that leaves you power-less if you want to plug in a radar detector or other 12V device.

No worries about that here. 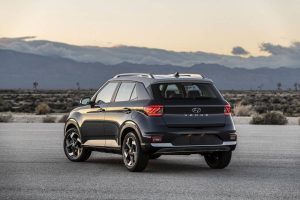 There is also a pull-up/manual emergency brake lever – as opposed to the almost-impossible-to-avoid electronic parking brake button. The lever is more functional – and simpler.

As well as more fun.

If you know what I mean.

At Christmas, kids usually go for the biggest boxes. But sometimes, the best presents are inside the smallest ones.