Resistance is not futile!

it just takes some balls.

A Virginia restaurant owner who defied the “mandates” – i.e., the lawless decrees – of Gesundheitsfuhrer Ralph Northam that Sickness Kabuki, including the wearing of Facial Diapers, shall be performed by all employees and customers of every privately owned business in the state has won in court.

Because he has balls.

Matt Strickland is the owner of Gourmeltz ’90s Music Bar & Drafthouse in Fredericksburg, VA. He built his restaurant from food truck up and – after fighting for what he thought was his (and our) freedom in Iraq and Afghanistan – assumed he had the freedom to offer food for sale and that people who wanted to buy it would be free to do so.

Or not – as they preferred.

Didn’t that used to be the American way?

Not so, according to Amos n’ Andying Gesundheitsfuhrer Ralph Northam – who assumed, now lookeee here,  the power to “mandate” that every privately owned business must perform sickness kabuki and require customers to perform it as well. Or else. The “or else” being summary revocation of the state’s permission to offer goods and services; i.e., the “business license.”

Strickland was also specifically attacked by the health department – whose permission and favor is also required to remain in business, if you are in the food selling business. Even if there is no evidentiary basis for claims made about unhealthfulness – other than being “noncompliant,” which is an altogether different thing.

No one got sick at Gourmeltz. No one is even alleged to have gotten sick. No one claims Strickland was serving gato tacos. No roaches scampering. 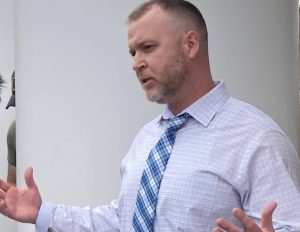 If there’s any upside to the tyranny being imposed on Americans in the name of “health” it is that Americans may begin to wonder how it is that Americans are obliged to beg permission of the government – of arrogant busybodies like “Coonman” Northam – to work and to engage in free exchange with other Americans. And then get mulcted by these same busybodies, who – with an effrontery that defies articulation – declared their “work” essential Because ‘Rona  . . . while “mandating” the closure of other people’s unessential livelihoods.

Strickland is one of the few, the proud – the ballsy – who stood up to the “mandates” of Gesundheitsfuhrer Northam. He didn’t close the doors  to his restaurant, which no one who feared catching cold was forced to enter. He did not force his employees to wear a Face Diaper, either. They are free to wear one if they wish to – and if they are not comfortable working around others who do not wear one, they are free to leave.

Until the Gesundheitsfuhrers seized the power to “mandate” – and most Americans bent knee, installed their Facial Diaper and waited for further instructions.

Strickland decided to follow his own. As was once characteristic of Americans, before they lost their balls.

He not only kept his doors open and left it up to employees and patrons alike to decide for themselves whether to Diaper – and whether to enter – he refused to be cowed by the threat and acts of the Gesundheitsfuhrer’s minions, who tried to shut his restaurant down by revoking his permission slip to be in business.

Gesundheitsfuhrer Northam then sicced Attorney General Mark Herring on Strickland – but in a cloud-parting moment of good tidings, a Virginia court has sided with Strickland, denying the Gesundheitsfuhrer’s faucian claims – nothing more – that being open and Diapers Optional constitutes a threat to public health. 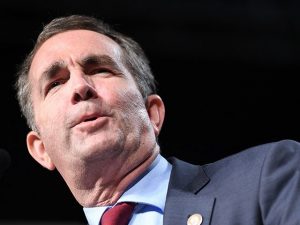 Judge Ricardo Rigual stated that Gesundheitsfuhrer Northam “failed to clearly demonstrate the factors necessary to grant a temporary injunction (i.e., to shutter Strickland’s restaurant by force). This means that – for now at least – Strickland does not have to worry about being Hut! Hut! Hutted! by the Gesundheitsfuhrer’s sickness shock troops.

Other business owners should be afraid – of the consequences of genuflecting before the Gesundheitsfuhrers, as all too many have been doing. Of not having balls.

They should consider that by bending knee, they are asking for more kicks in the place where their balls used to be.

Instead, they should grow a pair – and make it clear they have had enough, as Strickland has.

If enough of them did so – it would probably only take 20 percent of them – the “mandates” of the Gesundheitsfuhrers would become unenforceable, which would encourage more businesses to defy the “mandates” and before you know it, life would resume normality and Sickness Kabuki would revert to being the bizarre performance art of the mentally disturbed.