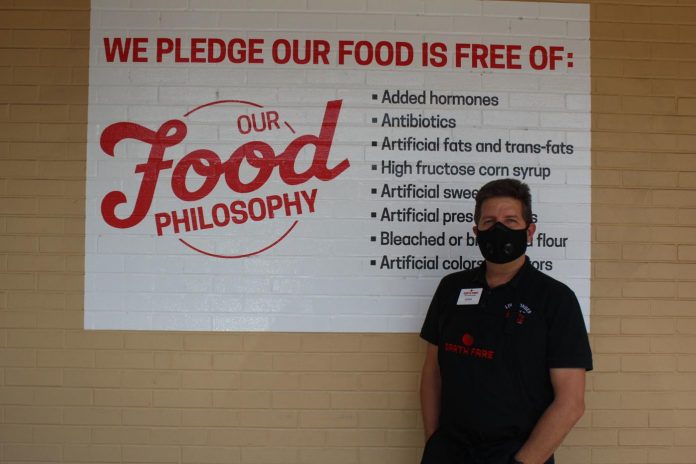 Well, I spoke to soon about Diapering waning here in Southwest Virginia. At least, in one “hot spot” of SW Virginia, where Diapering waxes. A veritable epicenter of sickness psychosis, where they are all-of-a-sudden doubling down on Diapering – probably because all of a sudden so many people have been taking their Diapers off.

I refer to Earth Fare – the store that had been militantly “of the body” – and so of the Diaper – until just a couple of weeks ago, when all of a sudden and just like that the Stalinist sign out front was gone and in its place a much smaller, meeker-looking sign left almost apologetically off to the right, inside the door.

I walked right by its impotent silent screaming, several times.

Today, the Stalinist sign is back up – outside. And there are new signs, inside.

I saw one as I walked up to the butcher counter to get some ground beef. Earth Fare has great deals on grass-fed ground beef, by the way – which is one of the reasons I go there. Or did, before sick kabuki became a condition of entry.

A sign taped to the glass display case read: “ALL (in caps) patrons and employees must wear a facial covering.”

I of course ignored it as I do when signs are stupid or evil.

Got my ground beef and continued to shop. It was while I was loading up some fresh wings a the hot bar that I felt the hate-glow of a Diaperer. It was standing at my elbow, proffering a box of Holy Rags like a street kid in Mexico trying to sell you a Chiclet only without the honorable intent of the latter,who is just trying to earn a peso.

“I don’t wear those things,” I told it – emphasis on things to get across my contempt.  I think it was a “she” but it was hard to tell. One of the many disgusting aspects of this sick kabuli is that it’s hard to see who you’re talking to.

Anyhow, the effaced creature began to screech about “the Virginia Department of Health,” to which I said: “I don’t give a damn about that” and then “have a nice day.” It looked appalled. I continued to shop, feeling the eyes of that thing behind me, hot with religious outrage.

So why the sudden renewed Diaper Fever?

I think it’s because everywhere else, the Diapers are coming off – and I know for a fact that a goodly number of them were shopping at EarthFare. Not a huge number but more than before. And this sight no doubt caused a few especially ill sickness psychotics to lose their minds – though admittedly it is hard to lose that which you no longer have.

But at any rate.

Someone – probably several – complained to the store’s manager and I suppose the manager decided to double down on the Diapering, to appease them. Or at least to get them to shut up.

What’s amusing about this is the Diapering is being imposed now upon the Needled – those who’ve received their Holy Jab, in part to be able to at last take off their Diapers. Wasn’t that part of the incentive to be Anointed?

It amuses my dark heart to think of these Diapered Buffoons being made to Diaper up again, after having been Anointed. They have earned their humiliation for the degradation they’ve helped to visit on us, the sane and healthy. 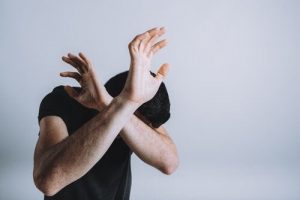 But it worries me that EarthFare and other such joints are going to lose some business over this – that of the Anointed, who are rightly sick of being Diapered – and who may take their business someplace else. Not because I bleed for EarthFare. I worry about what Earth Fare and these other stores are going to insist on to ease the deranged fears of the sickness psychotics – who will never feel “safe” again unless either everyone in their proximity is wearing the disgusting Diaper (even if Anointed) or everyone is forced to show proof of their having been Anointed.

Because the sickness has not been treated. The deranged aren’t sane. And they aren’t going to get well without us telling them forthrightly that they are sick – and to get therapy – or get bent.

No Smoking… In Your Own Car