Insanity tends to worsen when i’s normalized. So it’s not surprising to hear that the day after it was suggested by the “experts” at Virginia Tech that people should triple-down on the wearing of the Holy Rag, four of them would be even better.

Which tells you something about the efficacy of just one – especially if it’s literally just a rag, a “face covering” as required by the various “mandates” – i.e., rules by decree – that Americans now live under.

Don’t “face coverings” – “masks,” as they are generally styled – work? Isn’t that what those insisting on them have been saying all this time; that is to say, after Pope Fauci XVII said they don’t work?

Then said they do?

The double-diaper (now triple and even quadruple diapering – per the “recommendation” of a Dr. named Scott Segal at Wake Forest Baptist Health in NC) injunctioning – if that’s a word – tells us the single diaper most people have been wearing like a kind of Facial Codpiece all these many months does not work. Which of course is self-evident given the fact that “the spread” hasn’t stopped, even in countries like Great Britain that have been militantly forcing everyone to wear a Facial Codpiece all the time and everywhere.

In other words, they lied to us – again!

As Pope Fauci admitted he did when he said the Facial Codpiece was “theater” and didn’t work – before he changed his mind and now expects us to believe him – or at least obey him.

Mitt Romney – the “Republican” who invented forcing people to buy health insurance – has been a fashion leader when it comes to double-diapering. He obviously believes two diapers are better than one and in that case, surely three – even four.

“If you put three or four masks on,” says Segal “it’s going to filter better because it’s more layers of cloth.”

The problem, of course, is that these diapers or Facial Codpieces – “masks,” if you insist on dignifying them with that title – do not work, even in multiples, for the same reason that you can’t make a water-tight canoe out of bug screens. 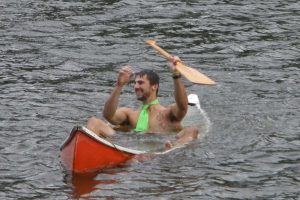 If they did, why haven’t double-quadruple diaper activists like Segan been triple and quadruple diapering before all-of-a-sudden? Isn’t he a doctor? Shouldn’t he know how many diapers it takes to “stop the spread”?

So just wear another one.

To show just how much insanity they can get people to buy into. It’s a modern Milgram Experiment, which was a 1960s attempt to see just how easy it was to get most people to do crazy – and evil – things, provided an Authority told them to do the crazy and evil things.

Show them a white coat or a name badge with a title – Dr. Mengele, for instance – and many will do almost anything.

Aren’t you proud to be an American? Where at least you know you’re free?

Leaving aside for the moment the evil absurdity of demanding that people who aren’t sick pretend they are – as has actually been demanded by a Gesundheitsfuhrer in North Carolina – if the government weren’t playing us for fools, a “facial covering” or “mask” – however many – wouldn’t cut it.

OSHA – the Occupational Safety & Health Administration – does not ok people walking around with cantaloupe halves on their heads in hard hat zones. If you enter a bio-hazard suite, a bandana over your face isn’t going to pass muster, either. 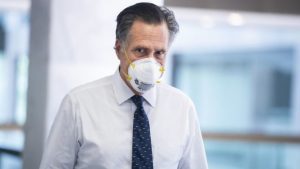 The answer is as obvious as the average American’s reluctance to come to terms with it.

The “mask” or “facial covering” isn’t meant to keep you from getting or giving a sickness – one that doesn’t kill 99.8-something of the population even if they do get sick. Rather, it is a device meant to demoralize and isolate you – if you are among the few who refuse to put one (or several) on – and to render the majority who do put them on an anonymized collective of pathetic serviles who do as they are told.

There is some good news, though. A revolt against this revolting business is developing. It’s based on the flash mob idea. If you want to feel a little better about your fellow Americans, check these people out. No doubt, the video will be pulled by the tube but there are always alternatives.

The Freaks and Tyrants haven’t won yet.