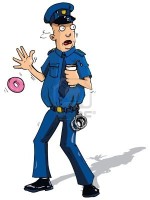 According to court records, Carter and his wife Shana allegedly did not report hundreds of thousands of dollars in income while Carter collected Medicare and Social Security.

They also under reported income on two tax returns dating back to 2008.

The Carter’s are scheduled to plead guilty in federal court on Monday.

Billy Joe is also facing separate charges in Botetourt County for rape, assault, and abduction among others.

NJ Law Enforcer Reveals His Contempt for The Law