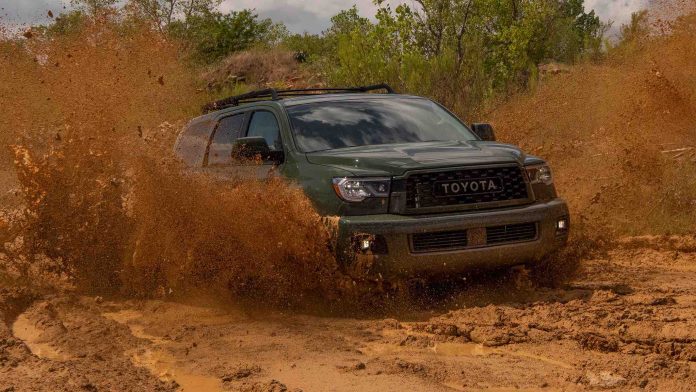 The 2020 Toyota Sequoia isn’t new – but that’s because it doesn’t need much improving. Toyota has been selling it the same way since 2008 because . . . it sells.

And you don’t risk improving on that.

It also doesn’t use much more gas than the “new and improved,” either – though you wouldn’t know that unless you actually checked the specs. Because most of the car press says otherwise.

A top of the line Platinum 4WD trim – which includes a load-leveling suspension and power-folding third row – stickers for $69,245. 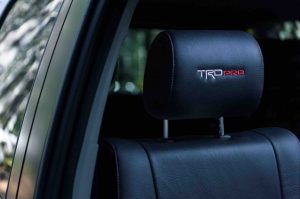 The TRD Pro gets Fox heavy-duty off-road shocks, beefier front and rear sway bars, running boards and a tubular roof rack coated with the same no-slip material used for the bedliner in the Tundra pick-up (which is the Sequoia’s sheetrock-carrying fraternal twin) and a pair of Rigid LED fog lights built into the far corners of the front bumper.

Plus M/S tires, special trim and just shy of 10 inches of ground clearance. 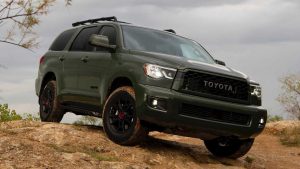 Toyota hasn’t improved what doesn’t need to be.

Strongest standard engine in the segment.

Much more cargo room than others in segment.

Tow rating isn’t as high as some of its rivals.

A bit more expensive than some of its rivals.

Could use a larger gas tank. 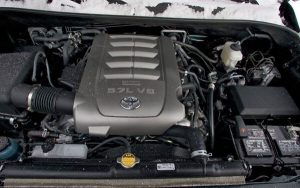 All Sequoias come standard with the same 5.7 liter V8 that Sequoias have been coming with since 2008.

It makes a class-highest 381 horsepower – without resorting to a turbo and without direct-injection, a form of fuel injection that’s new and improved – but doesn’t provide much improvement, if the measure of that is power.

The Tundra’s mileage is a little lower than its direct-injected (and turbocharged) rivals.

But only a little.

When you factor in the Expedition’s much higher price – $52,810 to start – and the Tahoe’s likely higher down-the-road maintenance costs, due to its V8 being direct-injected – that 2-5 MPG difference doesn’t seem like much of an . . . improvement.

It’s certainly not much of a difference. 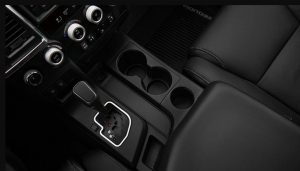 Unlike the new and improved, you can drive a 4WD Sequoia in 2WD – engaging the 4WD as you like. As needed. In rivals, the 4WD is engaged automatically.

As the computer likes.

There is reason not to like this – the first being the loss of control over the 4WD system. Part of the enjoyment of owning a 4×4 is being able to decide when to 4×4. There is another reason to like the part-time system:

Wear and tear – of which there will likely be less, if you use the 4WD less often. There is also the potential for problem of the automatic 4WD system coming on when it doesn’t need to be – and not coming on when you need it to be. o

There’s also no automatic stop/start system (ASS) in the Sequoia – so the engine doesn’t shut off until you shut it off. 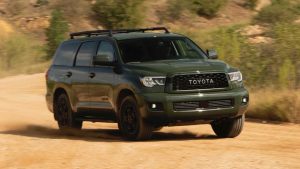 The big V8 not only has power. It has sound. On this score, there is no replacement for displacement – irrespective of appetite. Nothing else sounds like a big V8, no matter how powerful – and a big V8 is arguably as vital to a big 4×4 SUV’s appeal as cheese on nachos.

It also doesn’t tick – which DI engines do. Which is why DI engines are muffled under plastic covers, that make it hard to see them or work on them.

This is no small difference when attempting to U-turn (or park) a vehicle that is 205.1 inches long. 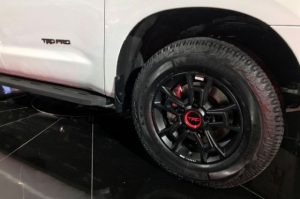 Which is actually not as long as the wider-turning-circle Expedition, which is 210 inches long.

The Sequoia’s body on frame construction isolates you from the road because the frame is isolated from the body by half a dozen rubber biscuits in between the body and the frame. These act as mini shock absorbers in addition to the shock absorbers at the wheels that control the oscillations of the Sequoia itself.

There is a manly, rugged feel to this steel-bodied Toyota that’s lacking in its rivals – which have been new-and-improved to feel more agreeable to suburbanites who use them mostly for kid-carrying and grocery shopping. Both the Tahoe and the Expedition have larger LCD touchscreens, for instance – and these have been given more pride of place on the dashboard, as in cars and crossover SUVs based on cars.

Giving them a more car-like feel.

Toyota upgraded its apps for the 2020 model year but the touchscreen itself is still a peripheral, way off to the right of the driver. But this is compensated for by easier to reach and easier to use knobs and buttons to control primary functions such as radio volume/station and the HVAC system/fan speed as well as secondary functions like the degree of heat you’d like for the seats. Instead of tap and swipe – or buttons with no nuance – there are thumbwheels that allow fine-tuning of the warmth, by feel – without needing to take your eyes off the road. 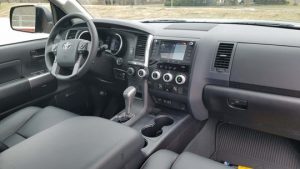 People who prefer meaty will also appreciate the Sequoia’s man-sized console-mounted gear selector, offset toward the driver – vs. the Tahoe’s steering wheel-mounted stalk and the Expedition’s rotary knob.

One small thing that could use improving is the Sequoia’s gas tank – which holds 26 gallons. If it had a 30 gallon tank, it would have more range on a tank than its slightly more efficient rivals – a much simpler way to address “concerns” over mileage than resorting to DI and downsized engines upsized by turbos.

The Sequoia’s styling – which is rounder and smoother than its more angularly styled rivals is a subjective plus – or minus – depending on what appeals to you.

The packaging is an objective plus. 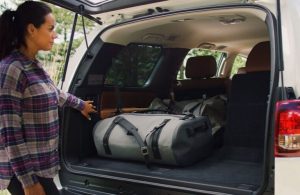 Note that the Tahoe – which is slightly longer overall, only has 94.7 cubic feet of total cargo-carrying capacity with its first and second rows folded.

There is also more hidden storage capacity in this Toyota, including discreet lidded compartments built into the door panels and a stash place in the center console, adjacent to the gear shifter – covered by a panel that doesn’t appear to be covering anything. It’s an ideal place to store a pistol or wallet out of sight.

There are three USB ports built into the forward part of the console – a nod to modern realities about plug-in accessories. But there is also a 12V power point, something getting hard to find in many of the new and improved. Which is a problem if you need to plug in a 12V accessory like a radar detector.

In the Sequoia, you can.

One of the few functional deficits of this Sequoia is its maximum tow rating – which ranges from 7,000-7,400 lbs., depending on the configuration. This is significantly less rated capacity than the Tahoe, which Chevy says can pull as much as 8,400 lbs.

On the other hand, Ford claims only 6,400 lbs. for the Expedition – which isn’t far removed from what many crossover SUVs can tow.

Probably, all of these ‘utes can tow more than their ratings given what the trucks thy are based on are rated to tow. The Tundra, for instance, is rated to tow more than 10,000 lbs. – and the Tundra and Sequoia are largely the same rig, the latter with a body covering the former’s bed. 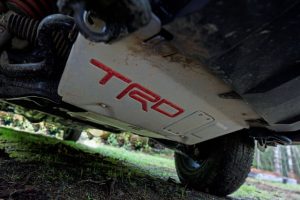 But the main sell here is arguably that the Sequoia is the oldest new SUV of its type on the market.

We have a good idea how well the Sequoia’s V8 (and the rest of it) will hold up over the next 12 years because we can refer to the previous 12 years. 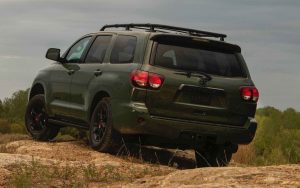 They’re not known – so you can rest easy about not taking much risk.

And you can avoid some of the known annoyances of the new and improved, especially ASS.

PS: Some inside baseball. The 2021 Sequoia will be largely the same as the ’20 with the exception of a new Nightshade package.

If the Sequoia needed improvement, Toyota would have.