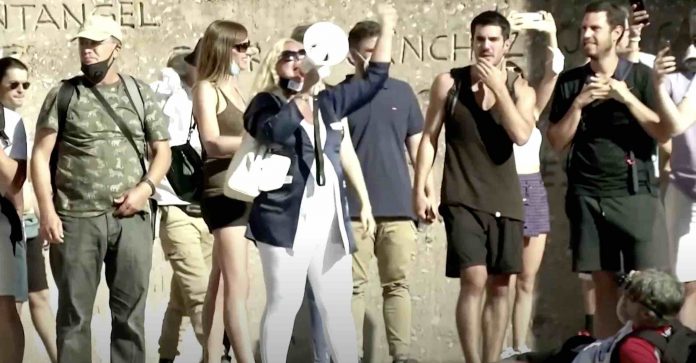 In Spain, they’re not only taking off their Face Diapers, they’re standing up to police who are trying to enforce Face Diapering. There was a huge rally of the Undiapered in Madrid, attended by thousands, who are tired of being told they’re sick and ordered to behave as if they were.

And when police tried to Hut! Hut! Hut! a woman who wasn’t wearing a Diaper, people came to her defense, forcing the Diaperers to back off.

It is all really good news – which probably explains why it isn’t being reported by the American press.

Which seems to want to report nothing but bad news – even when it has to be made up.

In order to efface the good news.

The most egregious example of this, of course, being the daily hyperventilating over “the cases!” the cases!” and “hot spots” of “cases!” The implication – never directly stated but heavily implied – is that a “case” is tantamount to death, or at least, an illness so serious that it will require medical attention to recover from it.

But the fact is that almost all the “cases” being reported don’t even have symptoms.

This is a disease so deadly people only occasionally get sick from it. And of those who do get seriously sick, almost all of them, according to the CDC, “had one or more underlying conditions such as chronic lung disease, diabetes, cardiovascular disease or hypertension.”

In other words, unless you are already very sick or very old – in other words, already vulnerable to everything – you’ll likely only know you are a “case” if a test says so.

And these tests have such a low threshold that “up to 90 percent of people who have tested positive should actually have been negative, as they are carrying only tiny amounts of the virus, are not contagious, pose no risk to others, and have no need to isolate,” according to the latest “science.” Which isn’t being widely reported because if it were, Americans might get sick of being ordered around and ordered to wear a Face Diaper – as the Spanish already are.

British doctor and author Malcolm Kendrick has reported something even more damning – the conflation between what epidemiologists call the Infection Fatality Rate and the Case Fatality Rate. The IFR rate includes everyone who tests positive and the number of the total who end up dying. The CFR rate is much more specific. It is the number of people with symptoms serious enough to require medical attention  – i.e., hospital admissions – juxtaposed with the number of that total who end up dead.

The IFR rate – which is very low – is being presented as very alarming, based on the number of positive tests.

But the CFR is where doctors get “cases” from.

It’s in the acronym. The word has a specific meaning, which the media – as per custom – inverts to mean its opposite. (See, for another case in point, the media’s “coverage” of the “peaceful” protests.)

If “the cases!” “the cases!” reported by the media corresponded to the medical cases – i.e., the CFR rather than the IFR – then the mass hysteria wouldn’t be, as millions of otherwise healthy would be dying. There would be reason to be afraid – though not to Face Diaper, as Face Diapers – the disposable things most people are wearing, to say nothing of the old bandanas lots of people are wearing – stop a virus like a chain link fence stops mosquitos.

Instead of reporting the difference – which would reduce the hysteria – the media continues to screech about “the cases! the cases!” (i.e., the number of positive test results) without reporting the key fact that most of these aren’t “cases” in the medical sense because there aren’t any symptoms other than a positive test. That a positive test isn’t a death sentence – or even a weekend spent in bed – for something on the order of 90 percent of these not “cases.”

Yes, of course, people have died. The media does report that – with pertinacity – but without context.

It does not mean the not-elderly and healthy are going to die . . . before they get elderly and sick, at least.

But the media is doing its best to convince them that they will die if they test positive – by shystering the meaning of “cases” to mean what it doesn’t – in order to keep people afraid of what isn’t.

Which people in Spain are getting tired of pretending is.

Hopefully, that will soon spread.