Sanity is catching, even if the spread isn’t yet obvious.

A neighbor friend of mine – a nice lady in her 70s – stopped by to let me know she has cast off the Holy Rag, having lost faith in the new religion. More finely put, she got sick of being expected to play-pretend she is afraid of sickness. And went to Sam’s and then Kroger’s showing her face.

She was almost-Christmas-morning excited about this; she told me how good it felt to show her face among the faceless. She felt even better, she said, after she walked out of a restaurant she and a friend of her tried to enter face-showing, where a Diapered Acolyte of the Cult attempted to get them to don the Holy Vestment for the 15-foot walk from the entrance to the table – something as absurd (medically speaking) as the wearing of a condom for the first two or three thrusts and then removing it for the rest.

My friend, not being a countenancer of imbecile kabuki, refused to perform. She had to leave – but left with her self-respect.

And told me it felt really good.

That it gave her strength.

Standing up to bullies always does that. They rely on fear more so than muscle. It is the threat that usually does the trick. Often, it is not even necessary to punch back. All it takes is standing up. The bully backs down.

If a 70-year-old woman can stand up, almost anyone else can do the same.

Some, in this crisis, have blamed 70-year-olds for the bullying as well as the cow-like complying. This is both untrue and dangerous because it plays right into the hands of the people trying to collectivize us. How does the healthy individual assert his right to not be presumed sick when he asserts that “old people” – all of them – are asserting that he must play-pretend he is sick and play-pretending they are sick?

I just provided an example of one older person who neither plays kabuki nor expects others to perform it. I personally know others, including, I’m certain, my mom – who if she were not imprisoned by the state would never wear the Holy Rag.

I also know some younger-than-me people who do wear the loathsome thing. At my gym, the handful of Cultists whose faces you cannot see behind their Sickness Burqa are mostly in their 20s, a species of Kabuki even more idiotic than wearing a condom to have sex with a rubber doll, the WuFlu constituting about the same threat of killing them as they have of impregnating the doll.

I also know younger-than-me people who loathe the loathsome thing, including some home-schooled teenagers (the kids of friends of mine) who would rather don saffron robes and dance outside of airports with tambourines than perform the sickness shuffle. At least the Hare Krishnas appear to be having a good time. 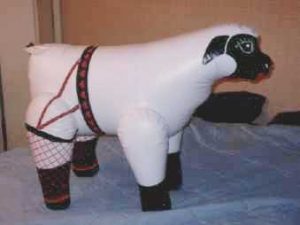 The other day, while showing my face at Kroger’s, the only other person whose face I saw within was a young woman about 25. I did my usual thing of walking up and telling her how good it was to see another sane person in the asylum and then did the thing I learned from the Media Bears – the brilliant YouTube video-mockers of the Sickness Cult. I raised my hands to my face and pawed both cheeks, as if caressing my missing Holy Vestment.

This is always good for laughs.

And then an interesting thing happened – at the bakery section. I was in the mood for a cupcake and spied the one I wanted behind the counter. A nice woman – neither young nor old, so like myself – asked whether I needed any help. I pointed at what I wanted and she proceeded to get it. As she handed it over to me, she began to apologize about not having gloves on. I pointed to my face and told her I wasn’t worried about it.

She lowered her Vestment – discreetly, as she had to, being in the same situation as the Pope’s valet – and smiled at me. In that moment much information was conveyed, almost Masonic handshake or French Resistance-style.

She wanted to let me know she was not – classic Star Trek reference – “of the body.” That she wore the outward symbol of the Cult because she had to (else lose her job, else lose her place to live, probably) but that she was not a member, inside. Her mind was not Diapered, even if her face had to be.

Don’t falter. Don’t let them make you believe it’s “over.” That they have already won. Nor that the young – or the old – are the enemy.

The enemy is defeatism. Acceptance of the “new normal,” which will ensure it is.

Avoid the pratfall of demonizing people as Diaper-pushers on account of their years.

Servility and stupidity afflicts the young and old, men and women – but as individuals, not archetypes.

To write off people on account of their age or their sex is to grant the Diaper pushers a victory they crave and for that reason people who say they want to be treated as individuals must never grant them.

A Dark Road Lies Ahead