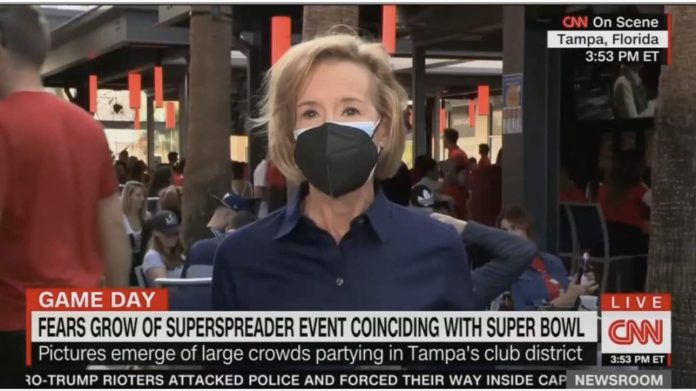 A large number of sane people gathered socially – and sans the Holy Rag – to watch the Super Bowl and participate in normal life, by not manifesting hypochondriacal terror of sickness.

This afflicted a reporter from CNN to such a degree that she double-diapered while moaning about the mass refusal to participate in mass insanity. “Fears Grow of a Superspreader Event,” the cutline read.

Well, too bad about your fears, Freak.

This is how we restore normalcy. By making it effectively impossible for these sickness psychotics to impose their psychosis. It is very hard to forcibly Diaper thousands or even hundreds of people – or even 100 of them.

A group that large goes into a store – or goes for a walk. It is hard to for a store to deal with that many, as it could get ugly – for the store. Also for the armed government workers the stores sic on the Unholy. Six of them vs. 20 of us is dicier than six of them on one of us.

Mass resistance is happening – though the acolytes of the Faith are doing their best to suppress coverage of it and to shame those who partake of it (e.g., characterizing them as “superspreaders” – though this is losing its punch, too since previous “superspreader” gatherings haven’t lived up to their billing because not enough or even any people have been dying).

So, enjoy – and consider joining. Show your face – and if need be, get in the face of the Faceless. Let them wear their double diapers over their quivery lips – and we’ll be glad to let them.

But let’s stop letting them tell us to wear the loathsome things – in numbers!

How About Four Wheeled Diversity?