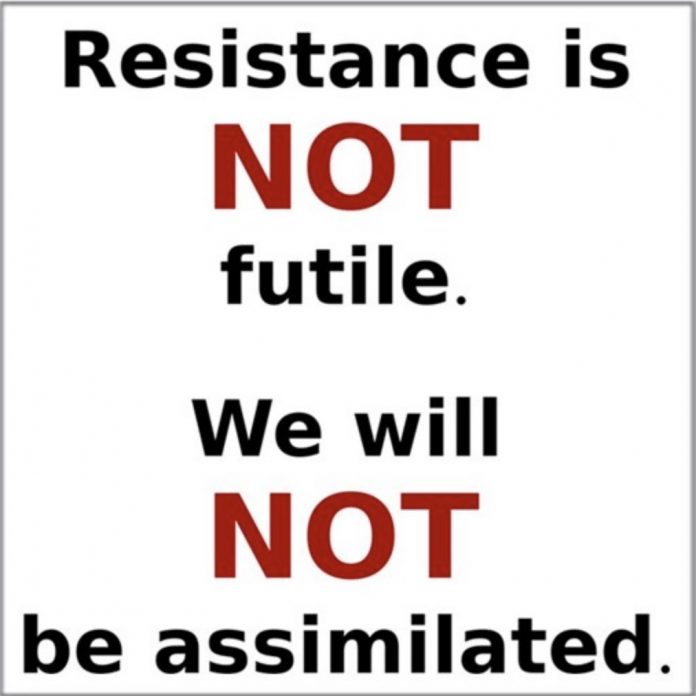 Not to the virus, which has never been a serious threat to most people anyhow – but to the terrorism practiced in its name, including that enforced by the sickness psychosis equivalent of the German Sturmabteilung – the storm troops – sent out to harass, intimidate, threaten and close restaurants and so on that dared to open their doors to people who were never forced to walk through them – and dared to not force those who did to wear a Diaper.

Just as the SA would bully those who didn’t wear an armband – or perform the required Kabuki of that era, which was to raise their right arm and give the “German” greeting.

Today it is – functionally – Heil Sickness!

Most people don’t want a confrontation and will put up with a great deal in order to avoid one; all-too-many people are cowardly go-alongs-to-get-alongs. It is why so many “good Germans” performed the NS Kabuki, including the wearing of the outward symbol of their submission to it and the physical rituals associated with it.

They were shamed into compliance and if that didn’t work, coerced by threats of repercussions if they did not comply. So most of them did.

Then as now. To paraphrase the Reichsmarschall, “it works just the same.”

In Germany the Kabuki lasted about 12 years. With some luck, it will last less than that here. There is some evidence that may be the case. In Florida, officially. Governor DeSantis has outlawed “vaccine passports.” At least two other states are following this healthy example.

And over just the past week, there have been several wonderful incidents of the Sickness Abteilung being thrown out of restaurants and such by enraged owner/patrons – who’ve finally had enough of it.

The most recent occurred at the Simmering Kettle Bistro in Ontario.

A team of Diapered-up Sickness Stormtroopers entered the joint and began to harass the owner and patrons over their failure to perform the required Kabuki. Specifically, the “problem” of customers and employees not wearing the Armband of Sickness over their faces. This triggers weaponized hypochondriacs, who – curiously – refuse to “practice” the most effective measure of all, which is to not enter restaurants, cafes and other privately owned businesses and thus not expose themselves to any cooties they fear may be in the air.

If you can’t swim, don’t jump in the pool. And stop harassing people who can swim.

But this isn’t about physical sickness, of course – and never has been.

If it were, then these Freaks would not only not go where deadly sickness might lurk they’d “practice” effective countermeasures, which do not include wearing a face-effacer that does not prevent the spread of viruses, which caution is right there on the box these things come in. Much less take off the disgusting things after having walked the ten feet from the door to their tables.

There would be bio-waste protocols in place for all the used face-effacers one now sees casually disposed of on the ground like used condoms in back alleys – except now it’s “practiced” in the parking lots of supermarkets.

That they are – as well as all the rest of it – is because it’s about submission to the Sickness Abteiling.

Some brave people are at last saying, genug!

There is no discussion with tyrants. Just – get out! 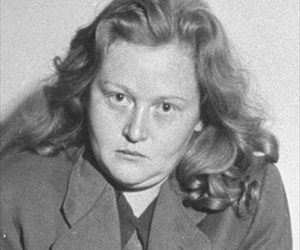 This was practiced a few days prior to the incident at the bistro by a brave pastor – also in Canada – who shouted down half a dozen armed Sickness Abteilung, led by what appeared to be Ilse Koch, reincarnated.

Koch, for those who don’t recall, was the wife of SS-Standartenfuhrer Karl-Otto Koch, who was commandant of the Buchenwald concentration camp, one of the many places where the Jewish bacillus – as Hitler framed it – was taken for treatment. His wife, Ilse, shared in the Kabuki practiced upon these unhygienic elements – again, Hitler’s framing. Koch was hanged after the war and while his lovely wife escaped the noose, she did receive a life sentence for her role in the performance of that era’s Kabuki, by people who had finally had enough of it.

Unfortunately not in time to prevent much of it.

This time could be different – if enough of us follow the example of the brave pastor who backed down half a dozen armed Sickness Abteilung led by a reincarnated Hexe von Buchenwald. These creatures depend upon the psychological dread their presence imparts and the authority to cause harm implicit in their badges and guns, the mere sight of which is often enough to terrorize their victims into cowed submission.

But this power wanes when the victims realize that giving in to terrorists does not end the terror; it assures more of it. And worse of it.

When the victims of this terrorism finally understand it is not temporary and that the end goal isn’t to “stop the spread” but to enshrine the “new normal,” they will at last have come to grips with the fact that they not only have nothing to lose by shouting – get out! GET OUT! – they have an opportunity to end the terror, before it really begins.