Tyranny begins with abuse of language. With evasive language.

Talk of “contributions” that you are forced to make; of being forced to “help.” The forced  element never mentioned – but defining. You are not asked to “contribute” or to “help.” You are told you will – or else. But without actually saying so.

It is the language of the thug without the forthrightness of the thug. It renders a vile act – theft, coercion – something even more so, by veneering it with a chintzy patina of voluntaryism.

And now there is “guidance” – which of course you’re also forced to obey. As for example in the state of California, where the tyrannizers decreed they will force every child who is forced to attend a state school to wear a demoralizing Rag of Obedience or submit to being experimented upon by the pharmaceutical cartel that might as well be the state, since it essentially controls the state.

There will be no asking. Just telling. Without the forthrightness. 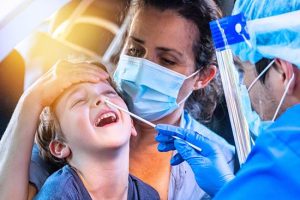 It is of a piece with prior “guidance” mandating – that is to say, forcing – the ongoing mass wearing of Obedience Rags and the performance of degrading Kabuki rituals meant to not merely to humiliate the individual (by making him behave as if he were literally suppurating disease, a hugely insulting implication when he is perfectly healthy) but also to drive a wedge, both psychological and physical, between individuals. To make them alarmed about the presence of others and constantly obsessing over it, something only sick (in the head) people did a little over a year ago.

This is being done as well with regard to the forcible violation of other people’s bodies – a thing formerly considered rape – but now considered a legitimate act by some, most notably (and cognitively dissonantly) those who fervently insist they have a right to control their bodies – when it comes to the extinguishing of the life of another body, within their bodies. But they see no incongruity in the holding of this view and the assertion by others of the right to control what is done with their actual bodies.

More mauling of the language.

Whether you consider abortion to be a morally acceptable thing is one thing. It can be debated. But it is another thing – a greasy, evasive thing – to speak of “choice.” You mean like chocolate or vanilla?

Why not be forthright and assert the right to terminate the life growing within?

Perhaps because forthrightness makes us uneasy. Some of us. The ones among us who do not wish to forthrightly face the ugliness – the couched-in-euphemism violence they approve of, the tyranny they support but don’t wish to acknowledge supporting. Such people are a paradox in that they seem to want to be perceived as “nice people.” As reasonable people. But they are only reasonable so long as you do not insist upon your right to reason differently.

Then, they become angry.

But they rarely act directly. That would be too . . . forthright. They are not the sort to pound on your door, a gun on their hip, demanding that you “help” them pay for their kids’ education. They will not be the ones threatening to inject you – or else.

Instead they will quietly vote for the same.

Perhaps there is something to be said for ending the secret ballot. If you’re going to be robbed – or jabbed – at least let the robber-jabber make himself known. Make him say it, openly.

There is something that sticks in the craw about violent people who are afraid to “man up” about their furtively violent tendencies. Who want to be regarded as people who would never harm anyone . . . themselves.

Tyranny requires such people. It cannot exist without such people. Such people are enabled by the warping of words, the effacing of plain language – so as to pretend that horrible things are not being done officially, legally.

We are just “asking,” after all.

The same people who vote furtively to rob you will cheer when you are forcibly evicted from the home you paid for because you did not pay the “property tax” (more evasive language for the rent in perpetuity you are forced to pay that obviates the very possibility of property, as one cannot meaningfully own that which one is forced to constantly pay for and which can and will be taken away for failing to cough up) they secretly voted to increase.

They will say nothing to your face about you showing your face. But they will vote to have proxy goons force you to efface it and to be needle-raped, too. It will make these timorous tyrants “feel safe.” Until of course the tyranny wheels ’round upon them. This is something these people never understand. They imagine that violence can be controlled. That it will only be used in ways they approve of, once officially approved and used against those people – the ones they want the violence to be levied upon.

Never themselves. Until it is.

The classic 1972 movie adaptation of James Dickey’s novel, Deliverance, is a very forthright movie. “If we want your money, we’ll take  your money,” says the shotgun-pointing hillbilly.

“Now get up against that tree.”

This is the nature of government. But it likes to wear a suit rather than dirty overalls and style what it does “guidance” rather than what it actually is.