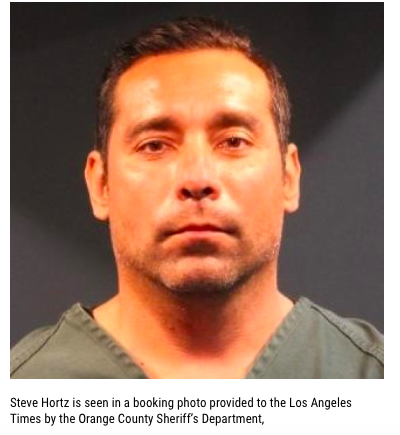 An elderly California man was found dead in his home by armed government workers who performed a “wellness check” after the 70-year-old hadn’t been heard from in awhile and concerned family members asked them to make sure he was ok.

Later, one of the AGWs – Steve Hortz – returned to help himself to the dead man’s stuff, including 15 firearm, a gun safe, a ceiling fan and other valuables – which he can be seen carting away by hand on dolly on closed-circuit security camera.

In the first incident, Hortz returned to the home July 27 and allegedly broke into the unoccupied residence through the rear and left a short time later. It was unclear if Hortz, who was in uniform at the time, left with any property from the home.

Hortz then returned to the home on the mornings of Aug. 10 and 16 in civilian clothes and allegedly removed items including weapon safes, ceiling fans and cases containing unknown items.

OCSD immediately launched an investigation into the burglaries as soon as they were reported. Hortz was arrested the morning of Sept. 10 and was booked into the Santa Ana Jail on suspicion of burglary. He was also placed on administrative leave, and the department said it was investigating prior calls Hortz handled to see if similar instances had occurred.

The AGW has been charged with various felonies   – including grand theft and second-degree burglary. However the AGW was not fired.

As often happens in “cases” such as this, he was placed on paid vacation – styled “administrative leave” – notwithstanding video of him breaking, entering and stealing.

This predator – like all predators – has almost certainly victimized any others, similarly. Will there be an investigation? Will any of the convictions based on the testimony of this AGW be revisited?

It’s about as likely as Fauci saying it’s all clear; everyone can take off their Face Diapers and go back to living.

The Gangs of San Mateo