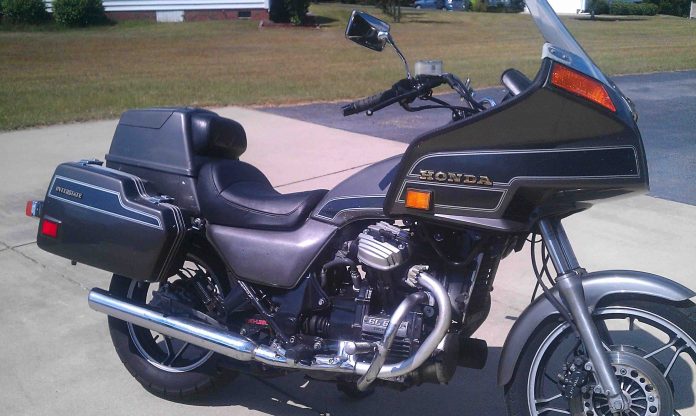 Ever try finding a firing pin for an Iowa Class battleship’s 16 inch guns? They probably didn’t make very many – and the ones they did make were last made probably 50 years ago.

My problem is similar, though on a smaller scale.

Needing some relief from sickness psychosis, I decided to roll out the ’83 Honda GL650 and take myself and girlfriend Dawn out for some fresh air and gyros at a roadside dive that looked promising. This ancient Honda has been a paragon of reliability for the fifteen years I’ve owned it, never once letting me down – except for the time I pushed it too far on the reserve tank and ended up having to push it, far.

But that was not the bike’s fault. 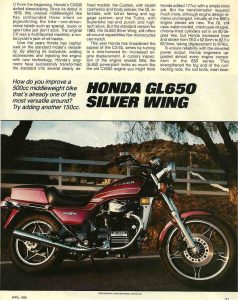 Other than that, it has never demanded more than the usual maintenance, which is minimal with old bikes like this one, which do not have computers or complicated electronics and – if we’re talking Hondas of that era especially – were probably better-built than their new-model analogs because that was Mr. Honda’s policy and because 40-50 years ago, Honda and the other Japanese brands were building their reputations, not yet having established them. Resting on their laurels they were not – and as anyone who has taken apart a Honda (or Kaw or Yamaha or Suzuki; sorry, Harley) engine of the mid-late ’70s and into the ’80s knows, the things are brilliantly engineered and put together.

These attributes make them superlative for everyday use, today. With one asterisk.

Some of these old bikes are oddballs that were not built in huge numbers. Honda stamped out millions of permutations of the CB750 that came out in 1969 and which shared many critical components that could be interchanged among them. Same goes for the Goldwing, the now-famous touring heavyweight that made its debut in 1975. 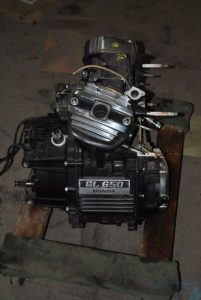 But Honda only made my 1983 Silverwing for one year. Or at least, only sold this bike for one year, here. That was almost 40 years ago. And that can make scrounging for certain parts harder. Its 650 cc (actually, it is almost 700 cc) “twisted twin” is also an unusual engine – for Honda. It is an entirely different engine than the inline fours and singles that Honda is better known for. And the 650-ish version – though similar to the more abundant 500 cc version – has a number of different parts that are unique to it.

Luckily, the starter isn’t one of them – at least, apparently.

This – on my particular Silverwing – has always been slightly sticky, at least as long as I have owned the bike. Push the button and it . . . eventually heaves over but because the engine is a good one, it has always started almost as soon as the starter tries – I’m given ‘er all she’s got, Captain! – to start it. That stickyness is of course a sign of tiredness and I knew I should have attended to it sooner but the same goes for the siding of my shed – and the new coop for the chickens (and ducks) I’ve only just now finally gotten around to dealing with and the greenhouse I’ve only laid plans for, so far.

It being a function of not having eight arms or a clone. 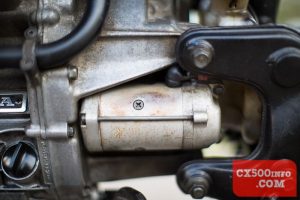 Anyhow, we got to the dive, which was closed – ironically enough, “for lunch.” But hadn’t had ours, so decided to saddle up and try elsewhere. To get there, we needed to ride some more. Which required starting the bike, which wouldn’t, this time.

The first time in fifteen years.

Now, the bad news was the dive was located on flat land, with no hill in sight – to roll the bike down and clutch start the thing. So I did the next best thing – and had my girlfriend Dawn push the bike, with me on it. She wasn’t able to get me going very fast, though – and when I popped the clutch, all it did was stop the bike. But it did break loose the sticky starter, which – praise the Lord! – stared the bike up again. Tapping a reluctant starter with a hammer sometimes does the trick, too. Don’t forget to remember this! It may save you a tow (or a trailer) in a pinch. 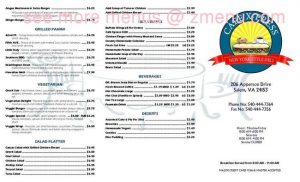 Now we could roll – and so, eat! But I dared not stop the bike – or rather, shut off the engine – until we got back home, to the safety of garage and tools. Luckily, another dive presented itself and – as is often the case with dives – it turned out to be an excellent place for eats and for that reason will give it public praise and encourage you to stop there, if you’re ever there. It is the Cafe Xpress in Salem, Virginia – a New York-style deli that is so good we’ll be back and you should go there, too.

I left the bike running outside while we chowed down on Reubens, superlative coleslaw and what I will tell you is perhaps the best bacon cheeseburger I have ever had in my life. And that’s from a born New Yorker, who has eaten in New York delis.

Back to the story! 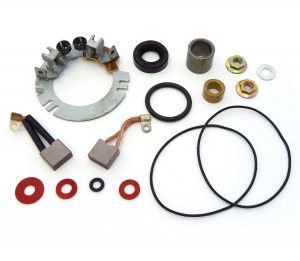 We saddled up- again – and rode back home. Once home and no longer needing to worry about it if the bike wouldn’t re-start, I shut it off and tried again – and it did. But I won’t trust it again until the starter is rebuilt – with a kit – or replaced, ideally with a new starter, so as to not have to deal with the problems of someone else’s used starter.

But a little researching clued me in to the good news – not in the salvation sense – that a GL500 starter (and rebuild kit) ought to work on a GL650. I am going to try the rebuild route first as it’s the cheapest – about $20. A new starter looks like about $150. Either way, the bike will be ready to roll again, soon.